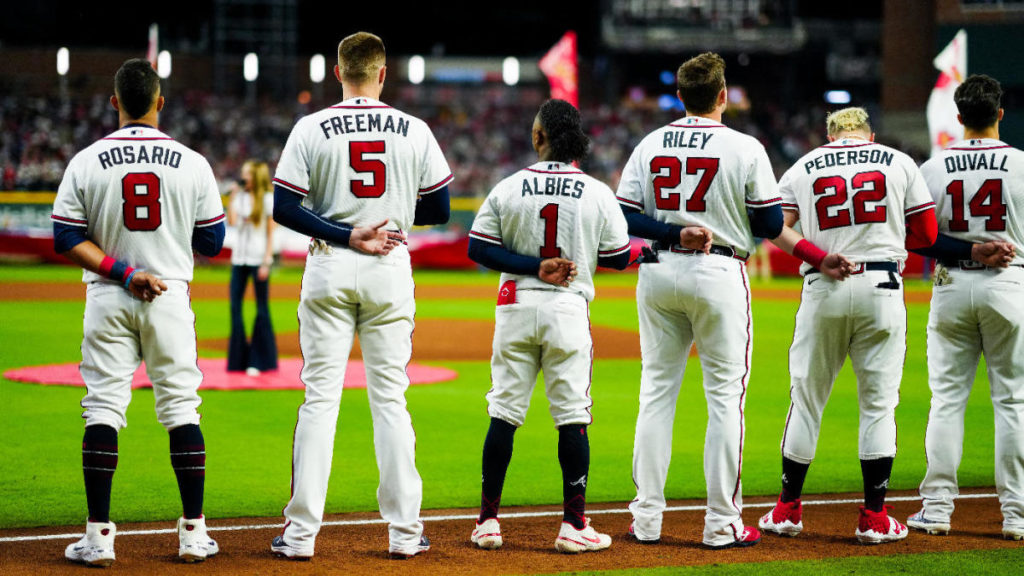 The last week in MLB was about a team in the National League ending a title drought, a catcher decides to retire, and a shortstop rejects a contract offer.

The Atlanta Braves defeated the Houston Astros 7-0 in Game 6 of the World Series to win their title since 1995.

The Braves relied on solid pitching from their starters and bullpen to prevent the Astros potent lineup from doing damage.

This is just the second championship for the Braves since moving to Atlanta in 1966.

The franchise also won titles in 1914 as the Boston Braves and in 1957 as the Milwaukee Braves.

Soler is the third member of the Braves – and the first position player – to win World Series MVP, joining pitchers Lew Burdette (1957) and Tom Glavine (1995).

Soler was one of several moves the Braves made at the trade deadline to help lead their team to a title.

The @Braves are the first team to have both the LCS (Eddie Rosario) and World Series MVP (@solerpower12) be midseason acquisitions. pic.twitter.com/T6qHAMVKth

According to Sarah Langs of MLB.com, Soler is the second Cuban-born player to win the award, following the Livan Hernandez in 1997.

San Francisco Giants catcher Buster Posey announced his retirement a couple of days ago at a press conference.

The Giants were planning on exercising their $22-million club option on Posey before he decided to retire, per Andrew Baggarly of The Athletic.

Posey ended his career on top as he was great for the Giants in 2021.

The catcher has been the face of the franchise for over a decade.

Posey played in just 12 seasons, but he accomplished plenty in those years.

One of the best to ever do it. pic.twitter.com/2tebpXAf8j

He won Rookie of the Year, three World Series titles, MVP, was selected as an All-Star seven times, caught two no-hitters, and one perfect game.

.@BusterPosey led the pitching staff on his way to 3 World Series titles.

Posey is one of two players all-time to win an MVP, Rookie of the Year, and three World Series titles (Pete Rose), per ESPN Stats & Info.

Buster Posey has announced his retirement.

Posey is 1 of 2 players all-time to win an MVP, Rookie of the Year and 3 World Series titles (Pete Rose). pic.twitter.com/RSnvnzpPLb

Posey was a unique catcher as he was excellent at handling a pitching staff and was superb at the plate.

.@BusterPosey is one of a few catchers to win an MVP.

Posey will be in Cooperstown when eligible as he has Hall of Fame numbers that support how great a catcher he was.

.@BusterPosey has been one of the best catchers to play the game. pic.twitter.com/ccwTZrbrsW

The Houston Astros made another attempt to bring back shortstop Carlos Correa, but it does not appear to have worked.

The Astros offered Correa a five-year, $160-million contract after the season ended, a source told Chandler Rome of the Houston Chronicle.

The offer was not close to Correa’s price in both the length of the contract and the total amount.

Correa is worth more than what the Astros offered him, but the question is will a team meet his contract demands?