The Dallas Cowboys focused on bolstering their defensive front this offseason. One of the biggest and surprising addictions was the signing of former All-Pro defensive end Aldon Smith in April. After almost five years of battling personal demons off the field, Smith has worked his way back into the NFL and is looked at as a key piece of the Cowboys pass rush this season.

Training camp is now in full swing and Smith is already making an impression on new head coach Mike McCarthy.

“I would say that if you walked away from practice you’d say ‘Hey, who the hell was No. 58?'” McCarthy said, via the Dallas Morning News. “That’s my thought when we walked out on the field for the first time. He looks good. I think his process back has been not a gradual one, but he’s hitting all the targets. You can see his power and his length is extraordinary. I’ve very, very happy with where Aldon is right now. You’ve got so much new around him — not only hasn’t he played, but he’s done a great job in training and preparing for this opportunity. But he’s playing in a new defense.

“He’s playing with new teammates. The communication, the language is new. So, I think for that, I really want to give our staff and our players a ton of credit for what we’ve accomplished in the virtual meetings because it definitely carried over to our time together here in pre-training camp and training camp. Aldon is off to a very good start. He’s impressive. Still very impressive.” 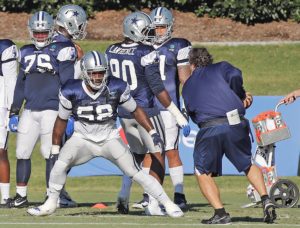 Smith has also caught the eye of the Dallas Cowboys signal-caller Dak Prescott who says he looks like he hasn’t missed a beat.

DeMarcus Lawrence and Aldon Smith rushing off the edge. Jaylon Smith coming up to make the stop on Ezekiel Elliott

(Video via the Dallas Cowboys) pic.twitter.com/cMFywRKuoM

New defensive coordinator Mike Nolan is running a hybrid scheme with three and four-man fronts to keep offenses off balance. The goal is to put players in position to make plays and create turnovers. When asked about the scheme recently, Smith raved about how it would take advantage of what he brings to the table.

It’s very encouraging to see Smith making this kind of an impact already after nearly a half a decade away from the game. No one should be looking for him to return to his All-Pro form just yet. However, now reunited with defensive line coach Jim Tomsula who coached him in San Francisco, don’t be surprised if Smith is around that eight sack range at the end of the season.

NFL Draft 2022: Middle to Late Round Receivers to Watch

Against All Odds: AFC/NFC Championships

Jacksonville Jaguars: Does this Team Have a Plan for 2020?