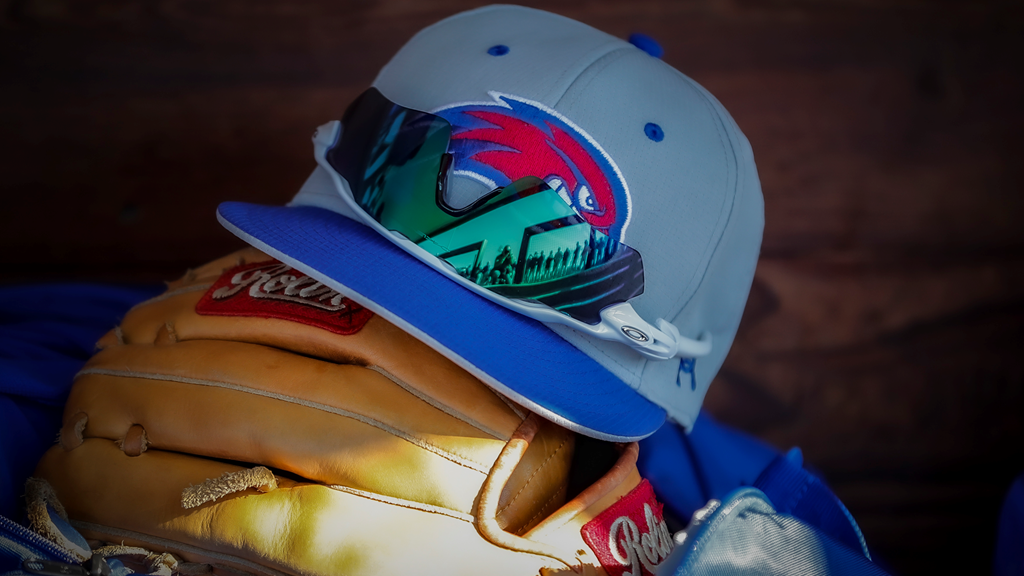 Baseball seasons are long, this one was not. Each season is a day-after-day soap opera, with its own storyline, slowly unfolding over a series of months. Matters far greater than the final score conspired to bring the season to an early and abrupt end. What was supposed to be a 56-game season became 15 games. No Conference games were played. The River Hawks never played a game at LeLacheur Park.

UMass Lowell won three of its first four games and four of 15 by the time the curtain came down in 2020, but the year was one filled with far more positives and negatives during that challenging first quarter of the season. 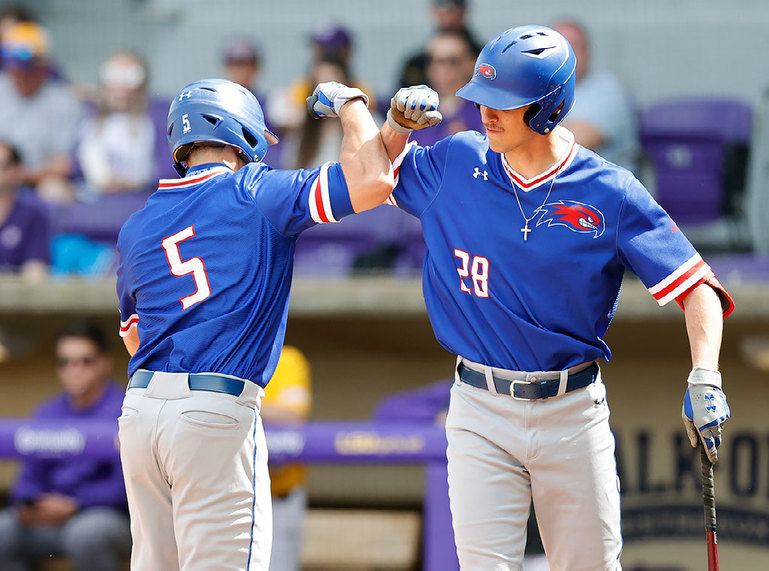 “I was very excited about the direction in which we were headed,” according to UMass Lowell Baseball Head Coach Ken Harring. “We faced elite pitching with a lineup that included five freshmen some days. We were figuring out who we were and making adjustments and getting better every day. I was excited about what I was seeing.”

The River Hawk lineup, despite its youth, was productive and more to the point it was growing and adjusting and beginning to show a potency that suggested the team could be a dominant one during the America East season. The team was improving its walk to strikeout ratio, the on-base percentage was climbing, they were running bases and stealing bases and hitters were using the whole field.

It was a peek at a future, immediate and long term, put on hold.  Junior Vinnie Martin (Lodi, N.J.) was the offensive motor firing on all cylinders. Martin, a career .234 hitter, lifted his game to new levels, hitting .447 and leading the team in nine offensive categories. “Vinnie showed a new level of maturity and took on a leadership role,” noted Harring. “He’s a vocal leader like a middle linebacker in football and he takes charge. He has that football mentality.”

The change in Martin as a hitter began to appear in summer ball where he’d found his playing time limited. He adjusted the position of his head resulting in a more stable and vertical batting stance. It paid dividends during the summer and came to full blossom as the college baseball season began.

“We challenged him as a hitter and he stood up to the challenge,” Harring said. “He found the right formula and was hitting everything on the button. It was phenomenal to watch and it set the bar for his teammates. He set the standard.”

It wasn’t just that the numbers were eye-popping, it was the consistency as well. Martin had hits in 11 of 14 games and reached base via hit or walk in all 14 games that he played. He had seven multi-hit games and received the ultimate compliment from pitching power LSU when he was intentionally walked with runners in scoring position.

Martin was not the only one with a productive bat. Junior Joey Castellanos (Nutley, N.J.), sophomore Gerry Siracusa (Kinnelon, N.J.), sophomore Robert Gallagher (Mullica Hill, N.J.), senior Cam Climo (Billerica, Mass.) and a group of freshmen all were important pieces in an offense that averaged nearly five runs a game.

Castellanos found a home at first base, after starting the year at the opposite corner, and proved to be a consistent hitter in the middle of the lineup. He finished the year with a .293 average and led the team with nine-RBIs. “He’s matured as a hitter,” said Harring. “He uses the middle of the field and drives the ball to right-center.”

Castellanos’ numbers have shown steady growth. He was a .227 hitter as a freshman and upped his average to .260 as a sophomore and added another 33-points this season. The change came in the second half of his sophomore season. He hit a solid .306 in his final 24 games of that season and then carried into the 2020 campaign. “He’s an execution guy and he understands how they are pitching him,” according to his coach. “He goes up there and works to put balls in play. He’s bought into that approach.”

Siracusa earned the everyday centerfield job with his glove, arm, and bat. The right-handed hitter had appeared more often as a pitcher, 17 games, as a freshman than as a fielder, five at-bats. “He wanted the option of being a two-way player and we gave him the opportunity and he earned the job,” according to Harring. “It’s about opportunity and perseverance. He had consistent at-bats and he hits the ball hard.”

Siracusa, batting in various spots in the lineup, hit .308, produced nearly a run a game, and was one of the team leaders in stolen bases. “We couldn’t take him out of the lineup,” said Harring. “He leads by example. He’s quiet, but he speaks by how he approaches everything that he does.”

Sophomore Robert Gallagher (Mullica Hill, N.J.) showed that he was in the process of taking another step in his development. The infielder raised his average to .255 but still struggled at times to make contact. “He has to put the ball in play more,” according to Harring speaking about a player who struck out 22 times in 15 games. “He’s a huge piece of the puzzle. He’s got good speed and he is a really good bunter. He is a catalyst for us and he can become an elite player.”

Outfielder Cam Climo got off to a strong start in the middle of the order hitting the ball hard to all fields but four games into the schedule it all came to an end with an injury. The senior had made a series of adjustments in his approach at the plate and it appeared to be paying off. “He can hit homers pole to pole,” according to Harring. “He had started to trust himself and not try to do too much. We’re a better team with him in the lineup.” It is hoped that Climo will be back for the 2021 season.

Senior designated hitter Ciaran Devenney (Manalapan, N.J.) had a season that ran hot and cold but his bat remained a threat in the middle of the lineup. He carried a .352 on-base percentage and was second on the team with nine runs scored.

Calero finished out the shortened season on a five-game hitting streak. He hit .232 but showed an on-base percentage that was some 120-points higher. Calero led the team in runs scored. “He’s really smart and he’s constantly making adjustments,” said Harring. “He’s a really good two-strike hitter and began attacking the ball as the season went on. He understands Division I baseball and has the chance to become an elite shortstop.”

Two other freshmen proved to be top notch defenders. Gilbride played errorless ball at second base and Proto won the everyday catching job with his strong defense, good arm and what Harring called an “advanced hitting approach.”

Pitching is anywhere from 70 to 90-percent of the game. Starting pitching is the key and starting pitching is where the River Hawks struggled to find consistency. The starting rotation was in transition as the season came to an early end, but did hint at better times ahead.

Junior John Polichetti (Atkinson, N.H.) and sophomore Matt Draper (Lowell, Mass.) appear to have earned spots in the 2021 rotation and freshman Cam Seguin (Woburn, Mass.), who pitched extremely well in middle relief, has put himself in the conversation. Polichetti, coming back from Tommy John surgery, showed good command of a variety of pitches in two scoreless appearances and was in the process of being stretched out when the season was halted.

Draper, who struggled in his UMass Lowell debut, put together a series of strong outings to end the season. “He’s athletic, efficient and has terrific movement on his pitches,” said Harring. “With him the sky’s the limit.”

Pitching out of the bullpen Seguin posted a 2.61 earned run average. He allowed runs in only two of his seven appearances. “He’s got that swagger,” said Harring. “He believes he’s better than anyone and he’s mentally tough. He can throw any of his three pitches for strikes at any time.”

The middle relief group was solid throughout the season. The coach said everyone in that group “showed flashes.” That group included junior Trevor Thompson (Eastvale, Calif.), sophomore Blaise Sclafani (Souderton, Penn.), grad student Jeffrey Peterson (Windham, N.H) and others as well as Seguin.

Sophomore closer Joshua Becker (Burlington, Mass.) picked up credit for a save in three of the four River Hawk wins. “He has ice in his veins,” said Harring. “He’s fearless.”

The season was short, but productive and more importantly it suggests strongly that the future is bright.