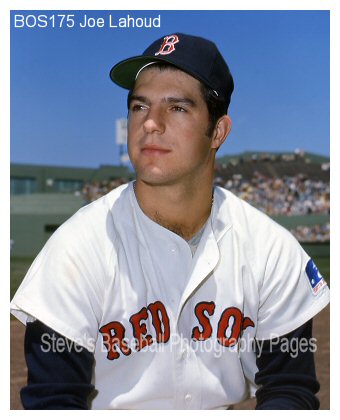 Former Major League Baseball (MLB) player Joe Lahoud, whose paternal grandparents were from Lawrence, is getting ready to go on a very special road trip.

This Fall Lahoud, a Lebanese-American who was honored at Washington Nationals Park during MLB’s first-ever Arab Heritage Night, on September 25, 2019, is headed to Egypt as part of a non-profit group’s continuing efforts to bring the sport to Middle Eastern youngsters.

“I’m very excited,” says Lahoud, whose cousin, Emile Lahoud, served as president of Lebanon from 1998 to 2007. “I’ve never traveled to Egypt before and, more importantly, it’s a great cause.”

Founded by Kemp Gouldin, Because Baseball was a finalist for the 2018 Peace and Sport Awards as a result of its mission to build bridges among different cultures through the national pastime. The group’s initial trip to Cairo occurred in April 2017.

“Only a few Arab-Americans have ever played the game at the highest (Major League) level,” says Gouldin. “Joe occupies a unique place in history as the first MLB player of Arab descent and it was exciting to see the Washington Nationals honor him.”

Former Tampa Bay Rays and Detroit Tigers outfielder Mike Mahtook, who is now in the Philadelphia Phillies organization, is also Lebanese-American. So was the late Fred Saigh, a real estate investor and lawyer who owned the St. Louis Cardinals from 1948 to 1953. And Egyptian-American Sam Khalifa, the seventh overall selection in the 1982 MLB draft who played for the Pittsburgh Pirates in the mid-eighties, used to reside in Alexandria, Egypt and Tripoli, Libya.

Though soccer is generally regarded as the sport that Middle Easterners play and enjoy, baseball is certainly not foreign to the Egyptian people. According to a published account, in 1889 the Chicago White Stockings and a collection of National Leaguers played an exhibition game in the shadow of the pyramids on the Giza Plateau. The White Sox would return to Cairo in 1914 to play another series of exhibitions with the New York Giants.

One year later, in concert with Emirates Airlines, the Los Angeles Dodgers signed a deal to sponsor the Dubai Little League through 2021, according to ETB Travel News. And three years ago, two members of the Dodgers – third baseman Justin Turner and the since-retired Chase Utley – reportedly went to Dubai to participate in five days of youth clinics.

Now it’s Lahoud’s turn at bat, so to speak.

“I cannot wait for Joe to make the journey to Cairo with Because Baseball – he will inspire countless young Egyptian ballplayers to reach their immense potential,” continues Gouldin, who adds that approximately 150 youngsters are expected to participate in the group’s 2020 Clinics.

Though he’s never traveled to the Middle East before, Lahoud – a former Boston Red Sox outfielder signed by the same scout, Frank Nekola, who signed Carl Yastrzemski — is immensely proud of his Lebanese heritage; his grandparents were born and raised in Lebanon before they came to America and settled in Lawrence.

“We were at their house every Sunday at 1 o’clock sharp for a true Lebanese meal,” he recalls. “It was a big feast – there was Manaeesh (Lebanese style pies), stuffed grape leaves, parsley, hummus dip, Djaj Mechwi (grilled chicken with peas), Mujaddara (cooked lentils) and Kibbeh (finely minced meat).”

According to Lahoud, every year he and his family would go to the Mahrajan Festival at St. Anthony’s Maronite Church, at 145 Amesbury Street in Lawrence. A huge celebration featuring Lebanese music, dancing, games, and food, Lahoud says it was not uncommon for people from all over the world to attend the event, which was held over the Labor Day weekend last year for the 45th time.

The Lahouds then settled in Danbury, Connecticut, where Joe accompanied his father and uncles to places like the Lebanese American Club, where he learned how to play pinnacle.

“The Lebanese population there was a very, very closely knitted ethnic group,” he continues.

“My heritage represents who I am,” says Lahoud. “It was easy to accept who I was, and it taught me there’s more to the world than just what is here in the United States.”