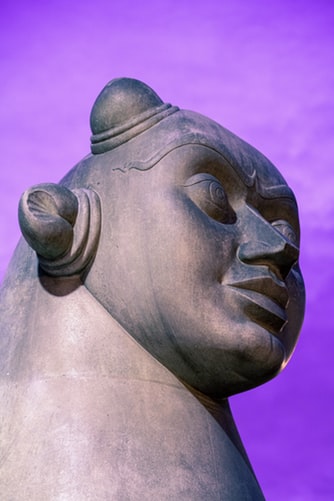 Have you ever seen someone with a large head? Maybe a kid rocking an enormous cranium?

I mean a colossal cranium, something scary huge, otherworldly in size, scope, and societal impact.

People think if what they are seeing is really what they think they’re seeing, a massive cranium. They wonder if there is a person anywhere underneath the head. Arms and legs are completely dwarfed by the person’s Neanderthal noggin.

You think to yourself “Is that really that person’s head? Am I missing something? Did someone put some drugs on my coffee this morning?

Gigantic skulls are a thing of wonder. They tell us that our species has its idiosyncrasies. There are unanswerable questions, and one of them is why some people’s heads are enormous.

All this vexed the entire community where I grew up. There was this kid with a head as big as ten Spalding basketballs crammed together. It was one marvelous and maddening melon. We called him Head. This had to be his name. No one ever called him anything but Head. On his baptismal certificate, and now his driver’s license, his name is just “Head.”

Perhaps you’ve been strolling through an outdoor pumpkin patch and your eyes lock on the biggest one in the lot. It was big, right, and slightly disturbing? Based on size alone you couldn’t buy it. You didn’t want the Trick or Treaters to be frightened away.

However big that pumpkin was, Head’s was orders of magnitude’s bigger – by age six. All round, thick, and wide, his head made you think about circumferences even though you never thought about them except in geometry class sophomore year of high school.

It wasn’t practical to measure the circumference of Head’s head. It would have been too cumbersome a project and calculation. Too many measuring tools would have been needed. You would have needed at least four people to execute the measurement.

And then a school of mathematicians would have to be called in. They would need their abacuses, rulers, protractors, yardsticks, and calculators. It would have been a protracted undertaking and tough to generate reliable data.

So many variables. Countless vectors and radii. Long division problems. Multiplication. Algorithms. Trigonometry. It was a Big Data problem.

Some anthropologists would have to be consulted.

None of this added up for any of us.

We couldn’t get Head’s Head around it.