Two Dallas Cowboys defenders will be receiving some hefty deposits into their bank accounts soon. According to ESPN’s Todd Archer, defensive backs Xavier Woods and Jourdan Lewis will both pocket sizable payouts of $500,000 in 2020 through performance escalators. The NFL provides this to players drafted in rounds 3-7 who play more than 35 percent of the snaps (on average) during their first three seasons. Each will see their base salary jump up to the original restricted free agent tender which is around 2.2 million.

Lewis was a two-time first-team All-American at Michigan (2015, 2016) and one of the most talented defensive backs coming out of college in 2017. In the third round, the Cowboys selected Lewis with the 92nd overall pick in an attempt to bolster the secondary. His career started off well with 54 tackles, 10 passes defended, and an interception as a rookie appearing in 15 games with seven starts. Unfortunately, though, after Kris Richard was hired as the team’s passing game coordinator and defensive backs coach in 2018 Lewis got lost in the shuffle due to his lack of size at only 5’10. Richard prefers tall and lengthy defensive backs going back to his days as the defensive coordinator with the Seattle Seahawks. 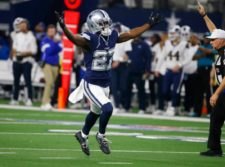 He would only see limited action in 15 games with just a single start and log a pedestrian 12 tackles and a pass defended in 2018. He caught a break last season, though, in the form of a teammate getting some bad news for himself. Cornerback Anthony Brown tore his triceps muscle and was lost for the season, and Lewis took full advantage. Appearing in all 16 games with five starts, Lewis registered 51 tackles, six passes defended, two interceptions, a fumble recovery, and a touchdown. He performed so well that he went from the team’s fourth corner to start the season to eventually starting opposite Byron Jones.

Woods, who was also drafted in 2017 in the sixth round out of Louisiana Tech, has been a solid free safety since he stepped foot in Dallas, with improvement in each season. As a rookie he appeared in all 16 games with four starts and logged 42 tackles, three passes defended, a fumble recovery and an interception. In 2018, he started all 14 games he played in and racked up 56 tackles, nine passes defended, two interceptions, and a forced fumble. This past season, Woods took his game to an even higher level as he recorded 77 tackles, five passes defended, two interceptions, two forced fumbles, and a fumble recovery. Exactly what you want to see out of a young player, continued development.

2020 will be big seasons for Lewis and Woods as they’ll be playing for lucrative paydays with their rookie deals expiring at seasons end. If their careers continue on the path they’re currently on, the 2017 NFL Draft will be remembered for providing the Cowboys with two foundational pieces in their secondary.

Topics: Los Angeles Dodgers Place Starting Pitcher Walker Buehler on Injured List with BlisterChicago White Sox Place Starting Pitcher Dallas Keuchel on Injured List with Back SpasmsOakland Athletics Third Baseman Matt Chapman to Undergo Season-Ending Hip SurgeryWe will look at the playoff racesWhat a gem by Braves youngster Ian Anderson in a one-hit 7 inning performance. Cubs Alec Mills throws the second no-hitter of the yearWhat a difference a week makes. The Yankees are back on trackWe talk about MLB idea of a bubble for the playoffs

We're Back Home Baby on NGSC Sports! Saturday Night.s Live from 9-10 PM2 Dudes Talking Smack and Bringing You All the Feels For SportsCall In Number will be 712-770-4160 PIN 576041Topics – NFL is Back NBA Playoffs NHL Playoffs My Man Sean Is Back with his week 1 NFL Picks Open Forum with Live Feed and CallersPulll Up a Chair/Computer/Phone Screen and Hang out with us on FB as HPS is presented by NGSC Sports Where We Never StopI'm going live using StreamYard! Before leaving a comment, please grant StreamYard permission to see your name at streamyard.com/facebook