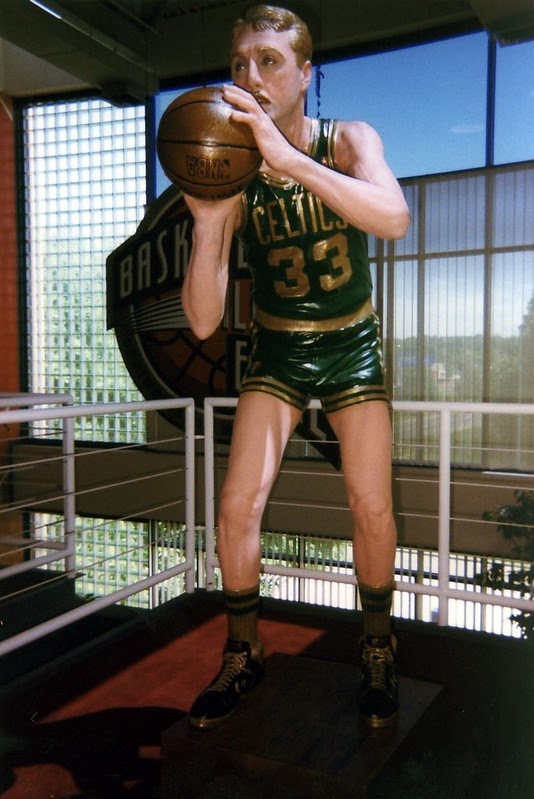 Al Gore didn’t invent the Internet. Larry Bird did. Steve Jobs didn’t invent the iPhone. Larry pulled off that feat. Google and Facebook and Amazon go to Larry when they need software code to be written to change how everyone lives and works.

Larry Bird embodies the sun, the moon, and the stars. Larry Bird’s sphere of influence extends throughout all of the world’s seven continents. Larry’s impact spans all the oceans, rivers, and mountains everywhere.

Larry Bird surrounds and envelopes Jupiter and Mars and Pluto and Saturn. Larry Bird equals the solar system. Larry Bird epitomizes life beyond what we will ever know.

You’ve heard about the atom and molecule? Larry Bird created both of them. Larry Bird split the atom.

Astrophysics, medicine, nanoscience, law, and Big Data – Larry conceptualized these curiosities and made them manifest.

Larry Bird taught Albert Einstein and Galileo everything they knew. He wrote Plato’s Republic. Larry’s life encapsulates all that is known about the world and human existence dating back to the dinosaurs and before when the Big Bang happened. He defined human history and is the sum total of human history.

Great movies? Larry made all of them: “The Sound of Music,” “The Godfather,” “Rocky.” “Napoleon Dynamite.” Remember Mrs. Robinson’s allure in “The Graduate”? Larry created that allure and the way she looked and acted.

Crayola makes a pack of crayons with 64 colors. Larry created all of them while practicing three-pointers.

Remember math and science — Avogadro’s Number, e = mc2, and The Theory of Relativity? All this Larry invented. The great mathematicians and scientists theorized endlessly about Larry’s theories.

Ever sipped a Corona with a Lime or Bailey’s Irish Cream? You drank from the Fountains of Larry.

Think of Larry Bird as an old friend who calls just to say hello, the birth of a beautiful baby, and the reason people cry tears of joy.

Picasso, Renoir, and the Mona Lisa

A sculpture he is. A carpenter he is and a plumber, electrician, drummer, doctor, teacher, anthropologist, and mountaineer.

He is Mount Everest. Alaska and California and Texas on Chamber of Commerce days. They’re all Larry.

Bird dominates the animal kingdom. He’s as a panther, shark, lion, bear and a barracuda. All wildlife is Larry. All of everything is Larry.

A signal, a moment, a phenomenon, and a juggernaut Larry is. He consists of reason itself. To all your questions he provides all your answers.

Larry was the first person to conceive of time and space. Air is Larry. He thought up oxygen and hydrogen on his own. Your atmosphere marinates in Larry Bird.

The human embodiment of the hard, soft, and social sciences, Larry is all learning and learned. Larry Bird is a perfect score on the SAT. Larry Bird is incisive critical thinking and photographic memory.

Bird is hope and dreams and optimism. Larry Bird is an Apollo Spacecraft landing on the moon. Larry landed on the Moon. Moxie, grit, and guile, Larry Bird wrote Jim Valvano’s ESPY Speech.

Well-combed hair, the radiance of a pregnant woman, beguiling eye shadow on a prom queen — all are Larry.

Bird is the word, the sentence, the paragraph, and the sports blog. Bird is the chapter, short story, and novel — in all languages. Larry Bird is the essay, the personal profile, the write-up that says it all.

Bird is an airplane, commuter train, taxicab, bus, and Uber. Uber was his idea. All transportation rides through Larry. All movements humans have ever made have been steered by Larry.

Larry envisioned and single-handedly drove the technological revolution and the Information Age. At the center of the blockchain is Bird. He mind-melded the concept of artificial intelligence. As we read this blog Larry is writing the software code that will ignite quantum computing around the world.

His influence extends far beyond contemporary times. He alone was the Renaissance Period. During the Middle Ages, Larry ruled the world. All apes adored him.

Bird exudes victory over defeat, overcoming obstacles, losing and then winning.
Bird marks the beginning, the middle, and the end. He is the destination and entire round trip. Destiny for all of us begins and ends with Larry.

But none of this is important.

All that matters is that Larry the Legend spawned Sammy Sportface.