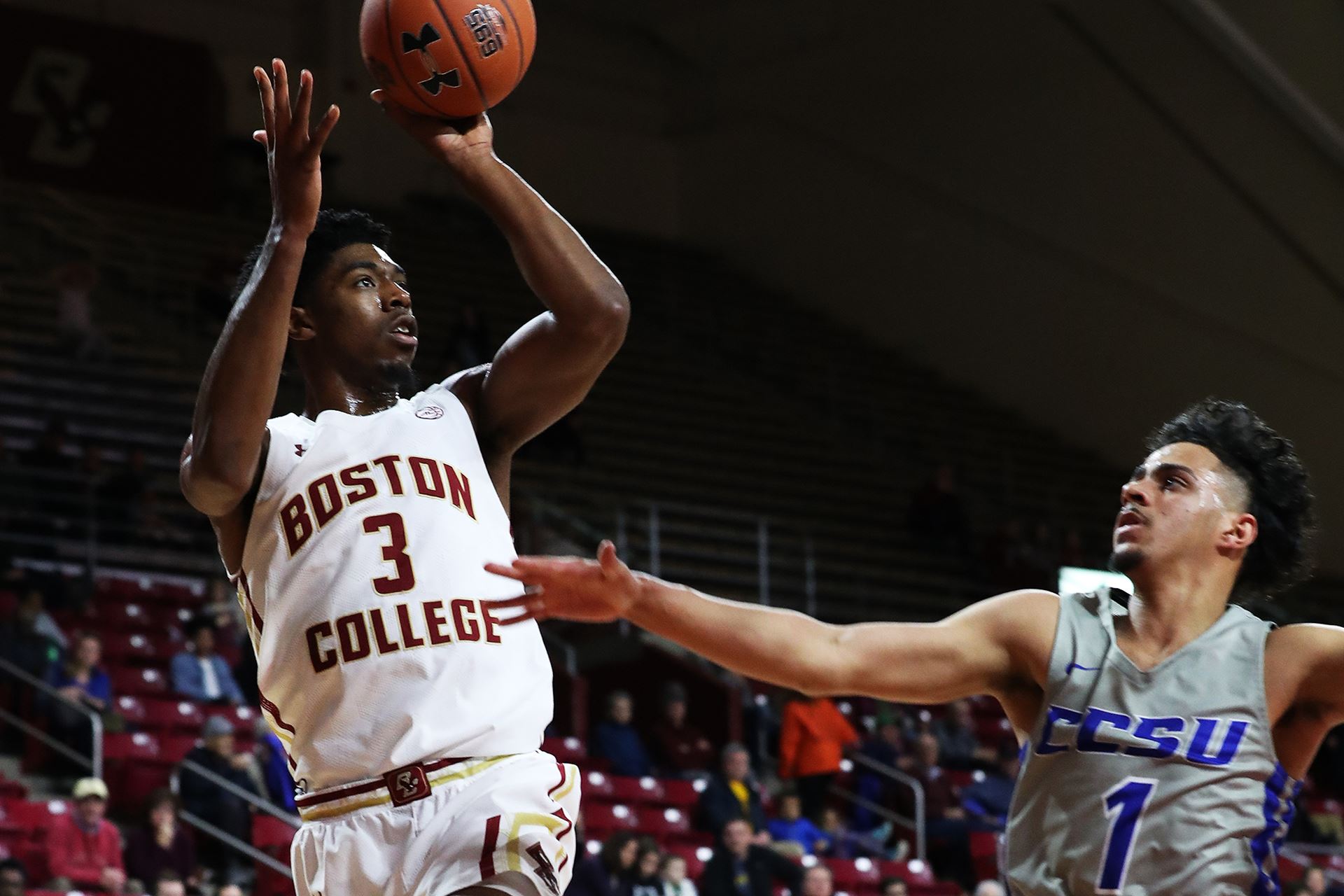 For the second game in a row, the Boston College Eagles (7-5) looked like a team that may be ready to take off. On Sunday, they faced a Central Connecticut State team (0-10) that is going through the growing pains of being young. A roster that has 10 players in their first year of college ball. Seven are playing, with six of them getting twenty or more minutes a game. It took awhile, but BC did what they were supposed to do. Beat up on a team that at the moment is not ready or have the talent to match up with a team from a Power-5 conference. The Eagles got the win 74-55 over CCSU.

BC have four players in double-figures. junior Steffon Mitchell recorded his second straight double-double of 13 points and 12 rebounds, and third of the year.. The backcourt duo of Jay Heath and Derryck Thornton combined to shoot 11-for-30 from the field. Heath had 16 points and eight assists, Thornton added 12 points and only one turnover. Boston College led in every team stats the game had to offer. Played and look like the better team on Sunday afternoon.

There was one lead change and two ties with the last tie being 7-7 on a three-point play by Mitchell in the first four plus minutes of the game. A three ball from Thornton gave the Eagles their first double-digit advantage at 26-15 with nine minutes to go in the first half. One out of two at the line from Heath gave BC their biggest lead of the half at 35-20 with 1:36 left in the first twenty minutes. BC was very good from the line on Sunday shooting 14-for-17, 82.4%. The half came to a close with Boston College in front 35-23.

BC put the game away early in the second half with a 9-1 run. That became a 23-5 run and the Eagles had their biggest lead of the game to that point at 56-28 with fourteen minutes to go. The only question at this point was what the final score would be and how much playing time would the walk on’s get. Yes, the end of BC’s bench did play a little over a minute as everyone who dressed for this one got some time on the floor. The final score from Conte Forum, BC 74 CCSU 55.

After the game, a relaxed BC head coach Jim Christian talked about how well his team has played over the last three games. He said: “We are good when we force turnovers and get steals.” The Eagles forced 23 turnovers which they turned into 24 points. They created 14 steals as the defense took advantage of a young Blue Devils back court all game long. Jared Hamilton said: “We made the game simple.” When asked about his improved three-point shot (on Sunday he was a perfect 3-for-3) he stated: “Put a lot of work on it during the summer.”

Sunday was the last non-conference home game of the year for the Eagles. They have one more left to play which takes place next Saturday at California. Next time BC is at home, the ACC schedule will be in full swing as they will play host to Virginia on January 7.