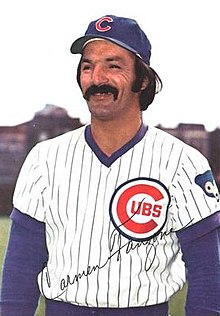 Retired MLB ballplayer Carmen Fanzone, of Sherman Oaks, turned 78-years-old this past August. The previous month, Fanzone, who suffers from congestive heart failure, went to UCLA Medical Center to successfully have a sensor inserted into his pulmonary artery.

These days, Fanzone is wondering whether he also needs his head examined. That’s because, when he checks the sports pages and reads that today’s players are commanding salaries like the seven-year, $245 million contract the Los Angeles Angels of Anaheim gave Anthony Rendon, he can’t understand why Tony Clark, the head of the union representing today’s ballplayers, the Major League Baseball Players’ Association (MLBPA), is turning a blind eye to the men like him, who don’t receive Major League Baseball (MLB) pensions.

“The salaries are going up and up,” he told me on the phone recently. “It’s like the owners are printing Monopoly money.”

Fanzone was among the generation of men who stood on picket lines and endured labor stoppages so free agency could occur.

Regrettably, for these 626 men, the union didn’t request that this change be made retroactive. So while vested retirees get to pass their pensions on to a loved one, spouse or designated beneficiary, the non-vested players don’t.

Imagine you were called up on August 15 of last year to your favorite club and stayed on its roster till October 1. You never played a game, never pinch ran, never pinch-hit, never was used as a defensive replacement. All you did was sit on the bench. For your 43 game days of service, because you played after 1980, you know what you’re guaranteed when you turn 62-years-old? A pension of $3,589. And that pension gets passed on to your loved ones when you die. But when he passes on, Fanzone’s non-qualified monies won’t get passed on to his wife, Sue, in spite of the fact he was on an active roster much longer than you were.

Even though the current players’ pension and welfare fund is valued at $3.5 billion, according to one post-1980 retiree, Clark has never commented about these non-vested retirees, many of whom are filing for bankruptcy at advanced ages, having banks foreclose on their homes and are so sickly and poor that they cannot afford adequate health care coverage.

What makes this injustice more unseemly is that the national pastime is doing very well financially. The minimum salary for a MLB player goes up to $563,500 in 2020. What’s more, the average value of each of the 30 clubs is up 19 percent from 2016, to $1.54 billion.

Clark needs to realize that all the men who played the game – whether they’re vested or not – made important contributions to the sport. Fanzone and 625 others shouldn’t be penalized because of something that occurred in May 1980 that wasn’t their fault.

A freelance magazine writer, Douglas J. Gladstone authored the 2010 book, “A Bitter Cup of Coffee.” His website is located at www.gladstonewriter.com

Sportface: Baseball In Arizona, A Trip to the Twilight Zone