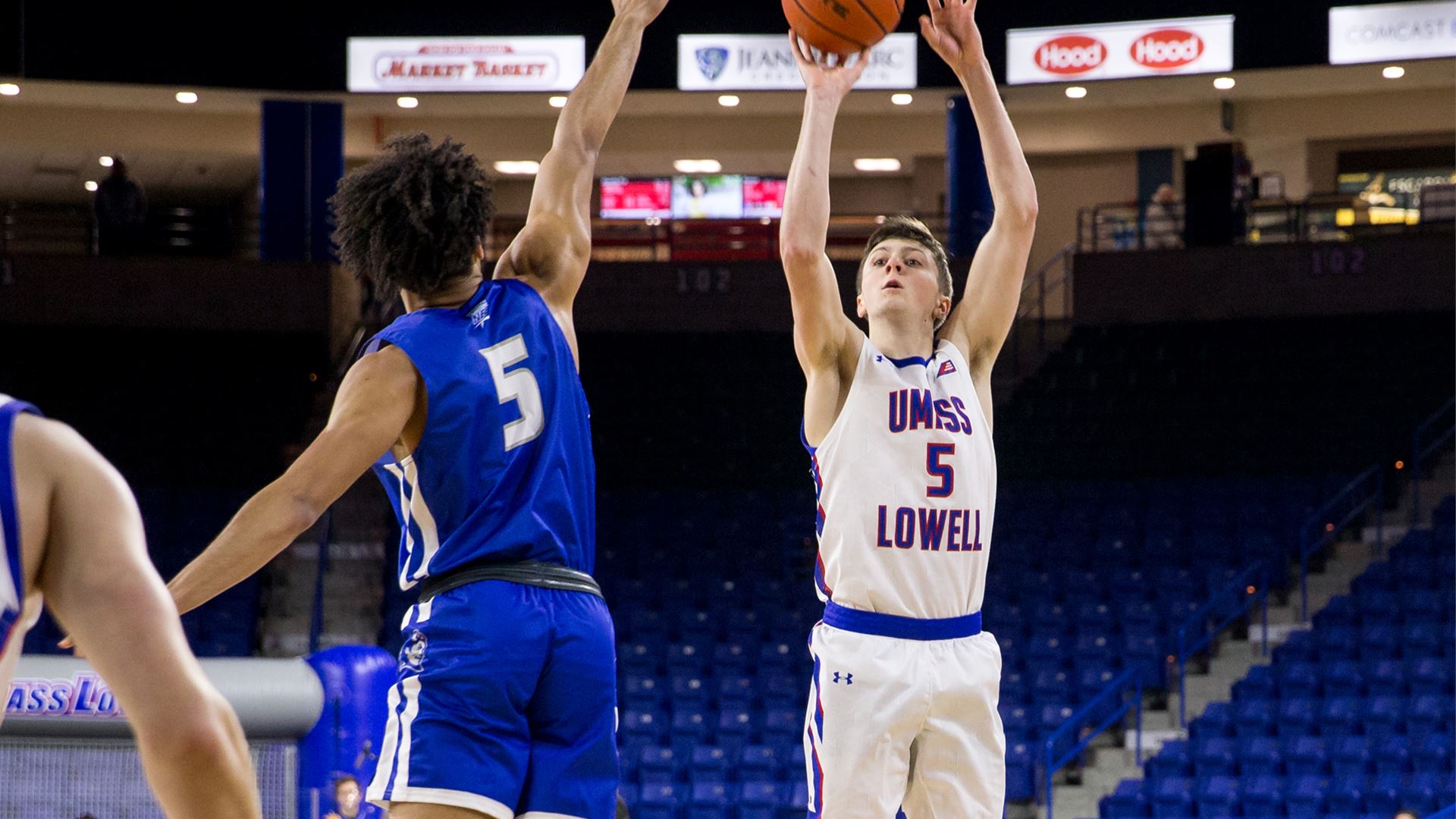 A game that features 10 ties and 19 lead changes came down to the buzzer on Sunday afternoon. The UMass Lowell River Hawks (4-5), had the ball with a chance to either win the game or at the very least send the game to overtime. With four seconds left in the game. junior Obadiah Noel (16 points, 8 rebounds), found a lane and drove the ball to the basket. He was rewarded with a lay-in that gave his team a hard-fought 73-71 victory over a game but still winless Central Connecticut State team (0-8).

After the game, Noel said, “the play was kinda set up for me.” His coach Pat Duquette added, “‘that the play had three or four different options and Noel chose the right one.” However you want to state it, the result was good for the home team as they get the victory 73-71 over the Blue Devils and are a win away from the .500 mark. The coach also made it clear that he did not think his team played very well. The River Hawks committed 13 turnovers and the Blue Devils came up with nine steals. Points off those turnovers were 16 for the visitors. Add to that the Blue Devils had a points in the paint advantage of 42-34 and you can understand why it was a tough Sunday afternoon on the hardwood for the River Hawks.

The good news for UMass Lowell was they rebounded the ball well. They out rebounding Central Connecticut by eleven at 40 to 29 and had four of their five starters finished the game in double figures. The coach still cannot be happy with the number of minutes his starters are logging. The search for production off the bench continues. The Blue Devils jumped out to an 11-6 lead on the River Hawks early in the first half. Senior Jamir Coleman got six of those points on his way to a 27-point day which matches his career-high. River Hawk freshman, Connor Withers, said: “he was hard to guard all day.” The River Hawks responded with a 14-2 run to take the lead at 20-13 with 9:47 left in the half. Several players contributed to the run. A Myles Baker three would tie the game at 20-20 with 8:26 to play and for the rest of the half, the biggest lead belonged to the River Hawks at five, 38-33 on a made free throw by Christian Lutete (10 points, 5 boards). The first half would end with UMass Lowell up 38-35.

The second half was close throughout. The River Hawks would build the biggest lead at five again on two free throws by Noel to make it 67-62 with five minutes to play in the game. The Blue Devils came all the way back to take a one-point lead at 71-70 on a layup by Stephane Ayangna with 42 seconds left in the game. A Withers free throw (16 points, 9 rebounds) tied the game for the final time at 71-71 with 30 ticks left on the clock. Central Connecticut State called time to set up what they hoped was the game-winning play. Stephane Ayangma took the ball to the basket but missed the layup. The River Hawks grabbed the rebound and called a timeout with 12 seconds left. Noel’s game-winning drive to the basket untied the game at 73-71, but the Blue Devils had one more chance. They called a timeout with four seconds left and would have to go the length of the court to tie the game. Blue Devils guard Zack Newkirk’s inbounds pass was stolen by Withers and the River Hawks ran out the clock and won their second in a row 73-71 over Central Connecticut State.

Senior Josh Gantz had a nice game for the River Hawks with 13 points and five rebounds. While freshman Greg Outlaw had the other double-digit game for the Blue Devils with 16 points. UMass Lowell, now 3-3 on their eight-game homestand, gets back on the court on Wednesday night when they host Sacred Heart at 7 PM.