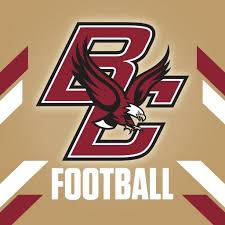 • Boston College hits the road for the first time this season as the Eagles head south to New Jersey to face Rutgers at SHI Stadium.

• Coverage on the Boston College Learfield IMG Sports Network begins at 11:30 a.m. with Jon Meterparel, Pete Cronan and Scott Mutryn. Fans can listen to the game locally on WEEI 93.7 FM, nationally on TuneIn and on Sirius channel 113, XM channel 386 and online via SiriusXM channel 970.

• Boston College looks to rebound from its first loss of the season after last Friday’s 48-24 setback to Kansas at Alumni Stadium.

• Saturday’s game marks the first visit to Piscataway for Boston College since a 35-25 victory in 2003.

• Boston College and Rutgers meet for the 27th time in series history Saturday in Piscataway. The Eagles lead the all-time series 19-6-1.

• The two former Big East foes meet for the first time since 2004.

• The series began in 1919 and the two schools have faced each other 26 times in series history. Both schools were conference opponents in the Big East from 1991-2004 before the Eagles joined the ACC in 2005.

• Saturday’s game marks the fourth straight year that Boston College has faced a team from the Big Ten. The Eagles defeated Maryland 36-30 in the 2016 Quick Lane Bowl, lost 27-20 to Iowa in the 2017 New Era Pinstripe Bowl and suffered a 30-13 setback last season at Purdue.

• Under head coach Steve Addazio, BC is 16-12 in the month of September, including a 14-6 mark in September home games.

• BC is 35th in NCAA history with 668 victories. The Eagles are one of eight ACC schools ranked in the top 40 all-time in victories.

• Junior running back AJ Dillon totaled his 17th career game with at least one rushing touchdown Sept. 13 versus Kansas. BC is 12-5 when Dillon rushes for at least one TD.

• Dillon moved into a tie with Andre Williams for third place in Boston College history with his 28th career rushing touchdown for the game’s first score against Kansas.

Closer Look at AJ Dillon in the Starting Lineup

134.1 rushing yards per game by Dillon

• Dillon became the first player in 120 seasons of Boston College football to begin his career with back-to-back 1,000-yard rushing seasons. Dillon went over the 1,000-yard mark on his four-yard touchdown run at Florida State in 2018.

• Dillon is just the fourth player in BC history with two seasons of 1,000+ yards rushing. He joins Derrick Knight, Montel Harris and William Green with two years of 1,000 or more rushing yards.

Among the Nation’s Best

• AJ Dillon has just 20 career starts, but he has 13 career 100-yard games already at Boston College in 26 games played.

• For just the fourth time since 2010, Boston College forced five turnovers in a game in the season opening win against Virginia Tech on August 31. BC forced five Virginia Tech turnovers, including three in the first half. That included the first career interceptions for Joe Sparacio and Tanner Karafa.

Five Turnovers Forced in a Game (Since 2010)

Starting the Season with an ACC Victory

• Boston College has started the season against an ACC opponent four times in school history. The 35-28 victory over Virginia Tech in the 2019 opener marked just the second time in school history BC defeated an ACC foe in the first game of the year.

• Boston College improved to 10-18 all-time against Virginia Tech, picking up its second straight victory over the Hokies after winning 31-21 in Blacksburg last season.

• BC has won two straight in the series against the Hokies for just the third time in school history.

• The Eagles are 6-1 in season openers under Steve Addazio and have won 13 of their last 16 openers overall.

• Anthony Brown finished with three touchdowns (two passing, one rushing) as the redshirt junior quarterback finished 15-of-26 passing for 275 yards.

• AJ Dillon’s second quarter touchdown was the 25th rushing TD of his career, moving him into a tie for eighth place with Derrick Knight (‘03) and Mike Cloud (‘98) on BC’s all-time rushing TD list.

• The appearance by graduate transfer Richard Yeargin was his first game played since the 2016 College Football Playoff championship game at Clemson. Yeargin missed all of 2017 and 2018 recovering from a neck injury suffered in an automobile accident.

• The Eagles have now intercepted a pass in nine consecutive games.

• Tate Haynes was second on the team with nine tackles, including a sack.

• Redshirt freshman linebacker Joe Sparacio finished with six tackles and an interception in the end zone in his first career start.

• BC’s defense held Virginia Tech to 2.3 yards per rushing as the Hokies finished with just 98 rushing yards on 42 carries.

• Boston College improved to 2-0 with a convincing 45-13 victory over Richmond. BC has started 2-0 in consecutive seasons and for the fourth time under head coach Steve Addazio.

• Boston College moved to 5-1 all-time versus Richmond in the first series meeting between the two schools since 1971.

• In 1978, the NCAA split Division I football into two levels: I-A, which became FBS, and I-AA, later named FCS. Boston College is 27-1 all-time against FCS schools. The Eagles’ only loss was a 27-0 shutout to Massachusetts in 1978.

• BC has won 27 consecutive meetings against FCS foes.

• The Eagles also ran for 300+ yards for the 14th time in the Addazio era, finishing with 346 on the ground on 50 carries (6.9 yards per carry). The 346 yards were the seventh-highest total under Addazio.

• Junior running back AJ Dillon logged his 16th career game with at least one rushing touchdown.  BC is 12-4 when Dillon rushes for at least one TD.

• It marked the third three-touchdown game of Dillon’s career.

• Dillon moved into a tie for 15th all-time in career scoring at BC with 174 points.

• Dillon caught his second career receiving touchdown on a career-long 42-yard reception from Brown to extend the BC lead to 28-7 in the second quarter.

• Graduate student tight end Jake Burt hauled in a career-long 55-yard touchdown reception to extend the BC lead to 35-10.

• Anthony Brown improved to 14-10 as BC’s starting quarterback. The 14 wins as a starter place Brown in a tie for sixth place in BC history for victories by a quarterback with Tim Hasselbeck (1998-00). Doug Flutie owns the school record with 30 career wins.

• Zay Flowers wowed coaches and teammates from the first practice of preseason camp in August. It took the Fort Lauderdale, Fla., native just three minutes into his first collegiate game to show the college football world his potential as well.

• Flowers ignited a BC offense that scored 28 first-half points in a 35-28 win over Virginia Tech.

• He also added a 58-yard reception against the Hokies to finish with two receptions for 91 yards. He led BC with 116 all-purpose yards.

• The Eagles scored the second-most points in series history (28 games) against the Hokies. Only the 1993 BC team scored more against a Virginia Tech defense in a 48-34 victory.

• Boston College is fifth nationally with three pass plays of 50+ yards in 2019. Quarterback Anthony Brown connected with Zay Flowers for a 58-yard reception and hit Kobay White on a 56-yard bomb against Virginia Tech. In the win over Richmond, Brown connected on a 55-yard touchdown pass to tight end Jake Burt.

• Brown is tied for third nationally with three passes covering 50+ yards in 2019. He is just one of 11 quarterbacks in the country to have three passes of 50+ yards this season.

• Going back to 2014, the Eagles have just five total passing plays covering more than 50 yards.

• Steve Addazio’s first season marked the largest total of 50-yard pass plays as BC connected on eight passes of 50 yards or more.

• Luchetti recorded his first career sack and finished with 1.5 TFLs in the win over the Hokies. Bennermon finished with five tackles along with a TFL in his first collegiate game at Boston College.

• Sparacio recorded six tackles and his first career interception in the end zone to end a Hokie scoring threat near the end of the first half.

• Haynes finished with a career-high nine tackles to go along with his first career sack and forced fumble to set up a BC touchdown.

• Since the start of the 2017 season, Boston College is second nationally with 42 interceptions. The opportunistic defense started the season right where they left off in 2018 with three picks in the Virginia Tech win on August 31 and two in the win over Richmond.

• BC is second nationally in 2019 with six interceptions. Only Arizona has more interceptions this season with eight.

• BC has picked off at least one pass in 11 consecutive games. The last time BC did not record an interception in a game was Sept. 22, 2018, at Purdue.

Going on the Offensive

BC All-Time Points Per Game Leaders

• Boston College and West Virginia are the only two schools in the nation to play 11 games against Power Five competition in 2019 with just six home games.

• Boston College has several players with famous bloodlines on the 2019 roster:

• Anthony Brown threw for a career-high 304 yards and five touchdowns on 16-for-25 passing in the 41-34 win at Wake Forest on Sept. 13, 2018. The New Jersey native is one of two Boston College quarterbacks in school history to have thrown five or more touchdowns in a game without an interception. Doug Flutie threw for 354 yards and 6 TDs without a pick in 1984 at home vs. North Carolina.

• Brown was sixth in BC single-season history with 20 touchdown passes in 2018. He was just the fifth player in BC history to throw at least 20 touchdowns in a season.

What Can Brown Do for You?

• Anthony Brown finished with the best single-game passer rating (245.9) by a BC QB dating back to the 1996 season with his performance against UMass in the season-opener in 2018. He finished 15-of-21 passing for 279 yards and four touchdowns. The yards and TD passes were then career-highs for the New Jersey native.

• In 2017, Brown was named ACC Rookie of the Week for the first time in his career following the UVA victory and also was one of eight quarterbacks nationally recognized by The Manning Award as its “Stars of the Week.”

• He was the first Boston College player with three passing touchdowns and zero interceptions in a conference game since Quinton Porter in 2003 in the 41-10 victory at UVA.

• It marked the third-best single-game passer rating by a BC quarterback since 1996 at the time. The performance now ranks fourth since 1996.

• Brown was the second freshman in BC history to start a season opener under center in the Sept. 1, 2017 win at Northern Illinois. He is the only freshman quarterback in school history who started to win a season opener on the road.

• Anthony Brown’s 275 yards passing in the win over Virginia Tech to start the 2019 season moved the junior QB into the school’s top 10 in career passing yardage.

• Brown is ninth in BC history with 4,121 career passing yards.

• With 195 yards passing against Kansas, Brown becomes the ninth BC quarterback to throw for 4,000 career yards.

• Head coach Chris Ash is 8-30 as head coach at Rutgers over his four years in Piscataway.

• Isaih Pacheco is third in the Big Ten and 31st nationally averaging 96.0 rushing yards per game.