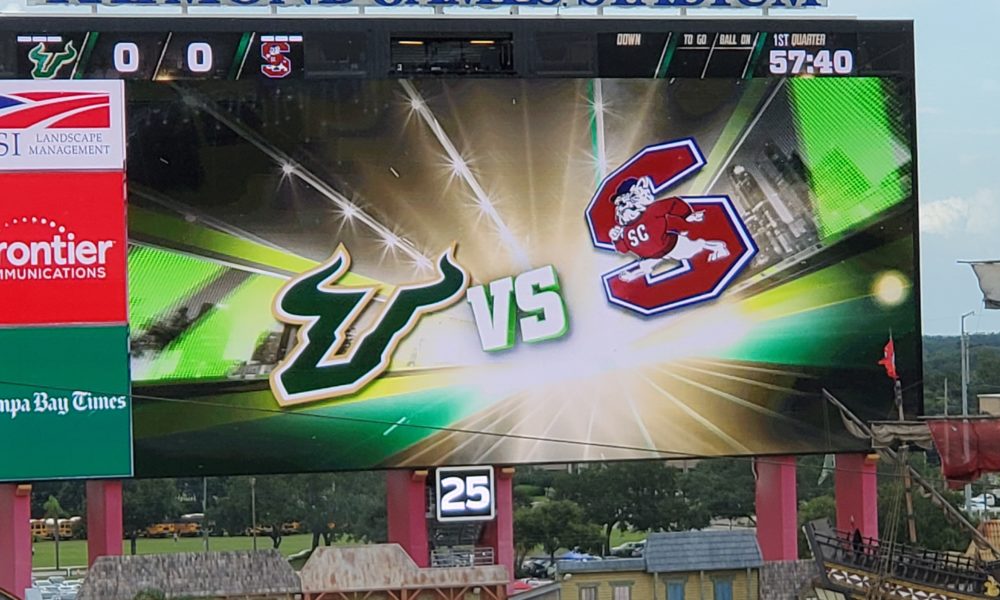 The USF Bulls headed home for a Week 3 home game against the South Carolina State Bulldogs. The game was played was under a cloudy sky and it was 86 degrees at kickoff with a chance of rain. There was a cool moment in the press box with me nearly bumping shoulders with AD of USF, Michael Kelly. The Bulls were looking to try and get their first win of the 2019 season. There have been rumors all week that Jordan McCloud would be the starter instead of Blake Barnett. McCloud did start at quarterback. Just like in the first game, players were doing backflips during warmups. Both head coaches, Charlie Strong, and Buddy Pough shook hands and hugged during warmups. The crowd was light compared to the Wisconsin game. Could the Bulls get their first win in 2019?

The Bulldogs won the toss and deferred to the second half. Which means the Bulls will start the game lets see how the offense looks. The Bulls began their first drive on the 22-yard line. It was a short drive and it was more of the same a punt. The Bulldogs began their first drive near midfield. On the first defensive play, the Bulls caused a fumble and the Bulls recovered. The Bulls don’t make much of the turnover and punt. The Bulls defense came up with another stop and forced a field goal. The Bulldogs lead 3-0 midway through the first quarter. On the next Bulls drive, McCloud threw to Johnny Ford on a 42-yard touchdown pass. The Bulls regained the lead 7-3. On that drive, the Bulls looked like the offense knew what they were doing.

The Bulls would take over at the 25-yard line. There was some frustration on the Bulldogs sideline as a player slammed his helmet into a dry erase board. On the current Bulls drive, Jordan Cronkrite appeared to be hurt but ran off the field. The Bulls next drive was a mix of run and pass. The result of it in a Jordan McCloud rushing nine-yard touchdown. It would result in a 24-three lead. The Bulldogs would take a knee and that would end the first half with the Bulls leading 24-3. Wilcox broke Sean Price’s record for most touchdowns by a tight end.

The Bulldogs received the second-half kickoff. There was another turnover by the defense this time by an interception. The Bulls returned the interception 62-yards. The Bulls would take the very next play on a 32-yard touchdown run. That would put the Bulls in the lead 31-3. The Bulldogs changed quarterbacks to Corey Fields. With that change, they drove down and got their first touchdown. The Bulldogs kicker missed the extra point and now the score was 31-9. The Bulls would receive a kickoff for the first time since the start of the game. Jordan Cronkrite had not returned to the game yet even after the half. The Bulls next drive would stall and they would punt. Their defense made some adjustments and forced the Bulldogs to punt. The Bulls would make another good special team play with a good punt return for 32-yards. The Bulls drive stalls.

They converted a 32-yard field goal and had a 34-9 lead. The Bulls caused another fumble and the Bulls took over. This set up the Bulls for a chance to put more points on the board. The Bulls would just do that for another touchdown for Mitchel Wilcox. They would up their lead to 41-9. The Bulls defense came up with yet another turnover. Once again, an interception. The Bulls would end the quarter with the ball.

The Bulls took the next play on a big pass play to Johnny Ford for 52-yards. On the next play, McCloud would run in for a three-yard touchdown and with that extended the lead to 48-9. The rain that was in the forecast had not yet occurred. The Bulldogs made another change at quarterback to Quincey Hill. Hill was in for one play. The Bulls continued to stifle the Bulldogs and forced them to punt. On the next Bulls drive, they made a change at quarterback to Blake Barnett. Unfortunately, that would lead to a punt. The punt was blocked by the Bulldogs. They would take that block and score their second touchdown on a 34-yard touchdown pass. The score was 48-16 after the touchdown.

The Bulldogs kick was out of bounds which resulted in a penalty. The drive would end in a hurry and the Bulls would punt. The Bulls get another fumble on a sack. They took it near the goal line. Barnett finally had something positive as he found Terrence Horne for a four-yard touchdown pass. The lead was now 55-16. The Bulls tied the single-game record with seven turnovers. They set a new single-game turnover record with eight takeaways. The Bulls made another change at quarterback to Jah’quez Evans. Barnett came back in just one play later. The Bulls lined up in the victory formation and won their first game of the season 55-16.

Next post Bernie Smith of Lutcher still without MLB pension