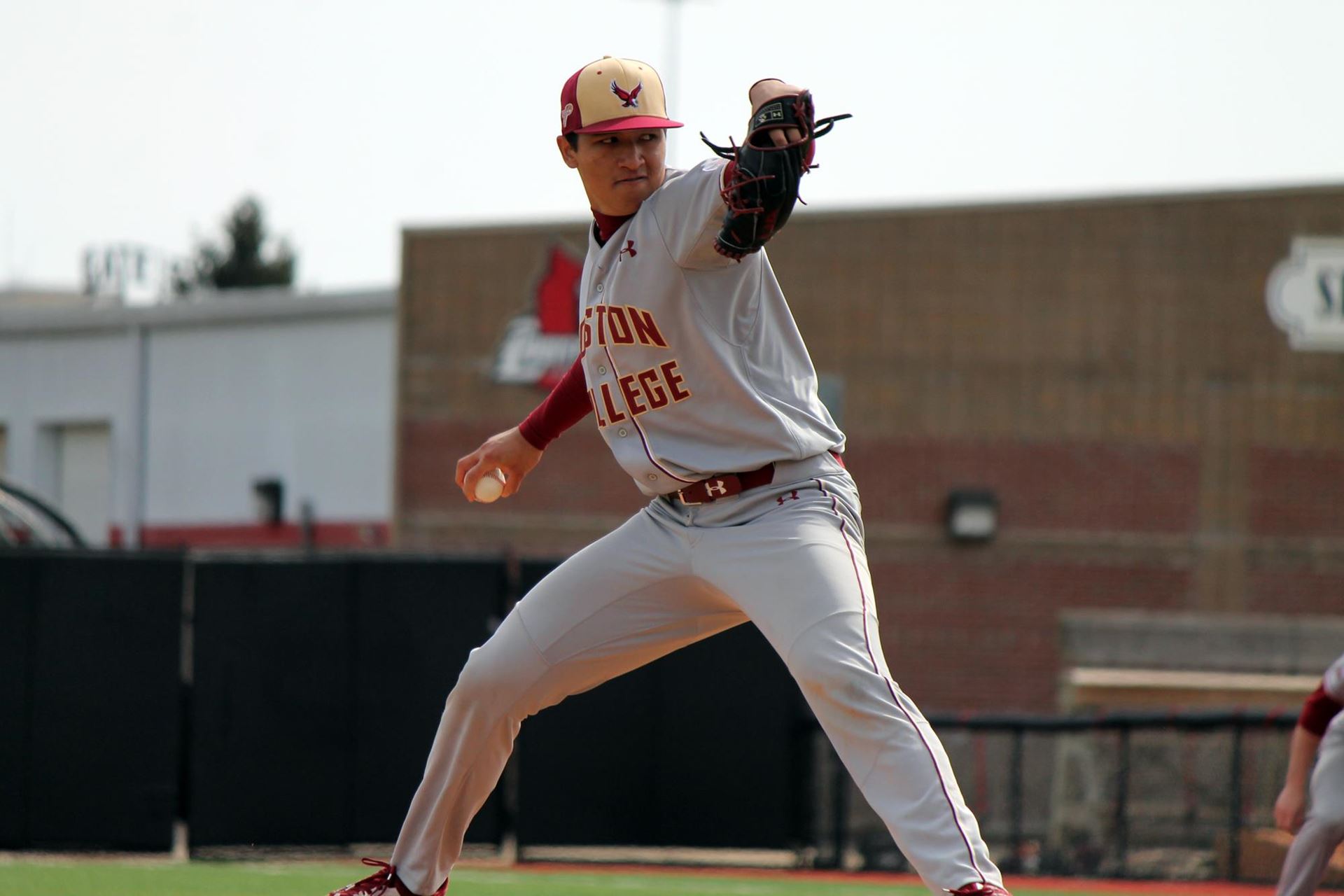 BC baseball picks up first-ever road win vs. Louisville.

LOUISVILLE, Ky. – Boston College baseball defeated No. 8 Louisville, 6-1, at Jim Patterson Stadium on Sunday afternoon. The Cardinals (11-4, 2-1), finished off an 11-4 victory earlier in the morning to conclude Saturday’s game that was suspended due to lightning. The Eagles finished their spring break trip with a 4-4 record and return home at 8-6 overall and 1-2 in the ACC.

Freshman right-handed pitcher Mason Pelio (San Diego, Calif.) was brilliant through a 7.2-inning start, the longest of his young career. Pelio (2-0) faced just one over the minimum through six as he picked off two runners in the inning. His day finished having allowed one unearned run on four hits and three walks with four strikeouts.

BC carried its momentum from the final innings of the series’ second game by plating two runs in the top of the first. Freshman right fielder Sal Frelick(Lexington, Mass.) got things going with a solo home run to right. Junior first baseman Jack Cunningham (South Riding, Va.) started a two-out rally with a base hit and scored on a double to right-center by freshman second baseman Cody Morissette (Exeter, N.H.).

Senior right-hander John Witkowski (Melrose, Mass.) relieved Pelio in the eighth with two runners on and two out. The Cardinals rallied for three runs against Witkowski in the ninth, but he was credited with his second save of the season as he got a groundball to second on a batter representing the potential tying run.

Game two of the series started on Saturday and concluded Sunday morning. The game was suspended due to lightning with the Eagles trailing the Cardinals, 10-0, in the bottom of the sixth inning.

BC’s bat came out strong when play resumed on Sunday as freshman third baseman Lucas Stalman (Bedford Hills, N.Y.) got the lineup going with a triple to the track in right-center. Junior Jacob Yish (Byfield, Mass.) came through with a pinch-hit, RBI-single and junior shortstop Brian Dempsey (Potomac, Md.) followed with a RBI-double.

In the ninth, Cunningham smashed a two-run home run to put the game at its final score, 11-4.

Senior lefty Zach Stromberg (Lafayette, Calif.) pitched the rest of the way for BC when play resumed on Sunday. He allowed one run on four hits and a walk with two strikeouts in 2.2 innings.

UP NEXT
Boston College returns to the Commonwealth of Massachusetts for a midweek game at Holy Cross on Tuesday, March 12 at 3 p.m. Due to weather concerns, the game time and location are subject to change. Check BCEagles.com for updates Monday and Tuesday.