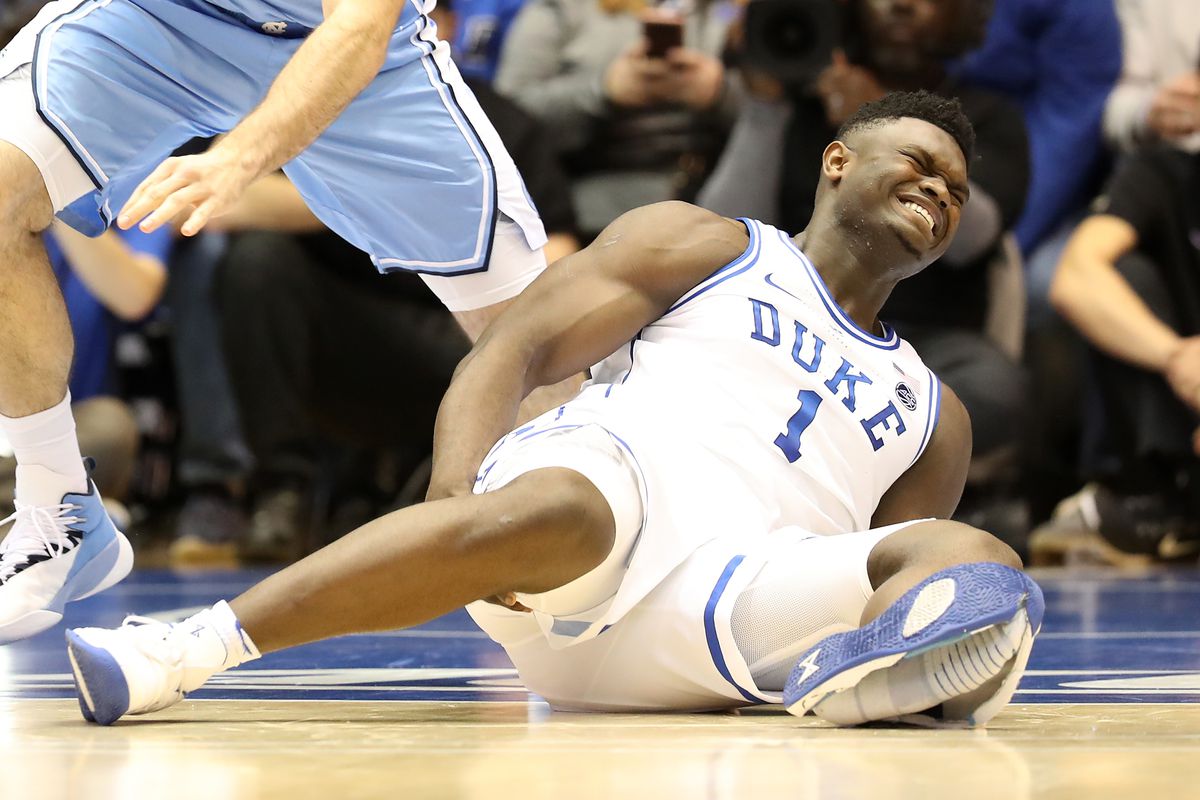 Share
Tweet
Share
Share
Email
Comments
In case you hadn’t heard, the college basketball season may have taken a huge turn Wednesday night.
Zion Williamson took a dribble handoff from Cam Reddish and drove right to the free throw line. Guarded by Luke Maye, Williamson attempted to change directions back to his left, and that’s when his shoe blew out.
He limped off under his own power and was later diagnosed with a Grade 1 knee sprain. Williamson is currently day-to-day and has already been ruled out for Saturday’s game against Syracuse, a team that beat Duke earlier in ACC play.
Williamson is going to be alright, but the injury raised a lot of questions in the basketball world. Should Williamson shut it down for the season? Should collegiate athletes receive compensation? Should NBA prospects even have to go to college?
Coincidentally, the freak injury coincides with an NBA proposal to lower the draft age to 18. It’ll be interesting to see if Williamson’s injury plays into the decision.
The injury occurred 30 seconds into No. 1 Duke’s 88-72 home loss to No. 8 North Carolina. Duke’s star-studded lineup couldn’t recover from the injury and played from behind the whole game.
Possibly more surprising than Duke losing to UNC without Williamson was UNC beating Duke with only 11 combined points from Coby White and Nassir Little. White has emerged as a potential first-round pick in the upcoming NBA draft with his successful freshman season in Chapel Hill, averaging 17 points per game in ACC play. Little, a highly-touted recruit, has shown flashes of potential but hasn’t earned much playing time in Roy Williams’ system.
White scored 9 points in 28 minutes, and Little recorded only one basket in 11 minutes.

Rather than the freshmen, it was the Tar Heels’ veteran duo of Maye and Cameron Johnson who led the way. Maye logged 30 points and 15 rebounds in 37 minutes. Johnson pitched in 26 points of his own.
RJ Barrett and Cam Reddish combined for 60 points, but no other Duke player scored more than 6.
Duke-UNC was always going to be the most talked-about game of the week, but it stole even more headlines after the Williamson injury.
This shouldn’t, however, obscure the fact that a handful of other important matchups took place in the ACC this week.
On Saturday, No. 16 Louisville eked out a 56-55 win over Clemson, and No. 4 Virginia survived at home after being tested by Notre Dame for the full 40 minutes. The Cavaliers won 60-54, behind 44 combined points from Kyle Guy and De’Andre Hunter.
Virginia pulled off another gritty 6-point victory a few days later, this time against a much tougher opponent. Instead of facing 13-12 Notre Dame in Charlottesville, the Cavaliers had to travel to Blacksburg to face No. 20 Virginia Tech. Again, Guy led the way offensively, scoring 23 points, including 17 in the first half.

While all headlines were on Duke-UNC Wednesday night, Syracuse was busy thumping Louisville 69-49. High-scoring sophomore Jordan Nwora was held to 11 points, and he was still the highest-scoring Cardinals player.
Louisville has struggled in February, going just 2-4 in the month. The road doesn’t get any easier, as the Cardinals host Virginia Saturday afternoon.
Syracuse, meanwhile, gets the opportunity to knock off another top team when the Orange face UNC Wednesday night.
Elsewhere, Florida State travels to Chapel Hill Saturday, and Duke will travel to Virginia Tech Tuesday, with or without Williamson.