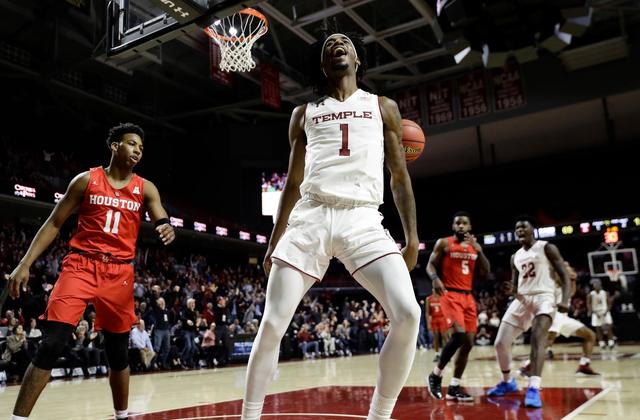 The Owls turned in a full team performance, but Quinton Rose’s stellar shooting and the team’s ability to hit clutch free throws in the final minutes proved to be the spark the Owls needed to beat Memphis 85-76 on Thursday at the Liacouras Center.

With just over five minutes left, the Owls only led by two, 69-67. Temple was able to pull ahead when it mattered, due to Rose, Shizz Alston, Jr. and De’Vondre Perry were able to help close it out with a few clutch buckets and free throws.

The Owls were able to get to the line a number of times in the final five minutes against Memphis. They were able to hit them with great success, ending the contest with a 73.5 free throw shooting percentage.

Alani Moore II also played a pivotal role in getting the win, stealing the ball three times within the last minute and a half. Moore also added 10 points off the bench.

Rose finished with 26, most coming from his insane first half, where he hit five three-pointers. The great start left Temple up eight at the half, 41-33. The junior helped the team keep their conference winning streak alive, winning their fifth straight conference game to improve to 5-1.

Rose got help from his defense which managed to steal the ball 11 times in the contest, leading to more opportunities for their offense. Additionally, their offense shot the ball very well from three, hitting 10 of their 27 shots from beyond the arc, while Memphis only hit one of their 23.

Memphis Head Coach Penny Hardaway was very animated on the sideline and felt that his team did not need to shoot as many threes, rather drive the lane and test Temple’s interior defense.

Nate Pierre-Louis also turned in a great game as he has been playing very well as of late, scoring 15 in this one.

What does this win mean?

With the win, the Owls stay near the top of their conference as they currently sit fourth in the conference. They are 15-4 overall, and 5-1 in the division. They only trail Houston, Cincinnati, and UCF who all have one conference loss as well. The AAC is very talented this season, and they are all very close, meaning that any of these teams can win the conference.

The Owls have a very tough Cincinnati team this Sunday at home. Cincinnati is currently 6-1 in the AAC, their loss coming from ECU and 17-3 overall. That game will be a must watch as Temple looks to continue their success at home this season.