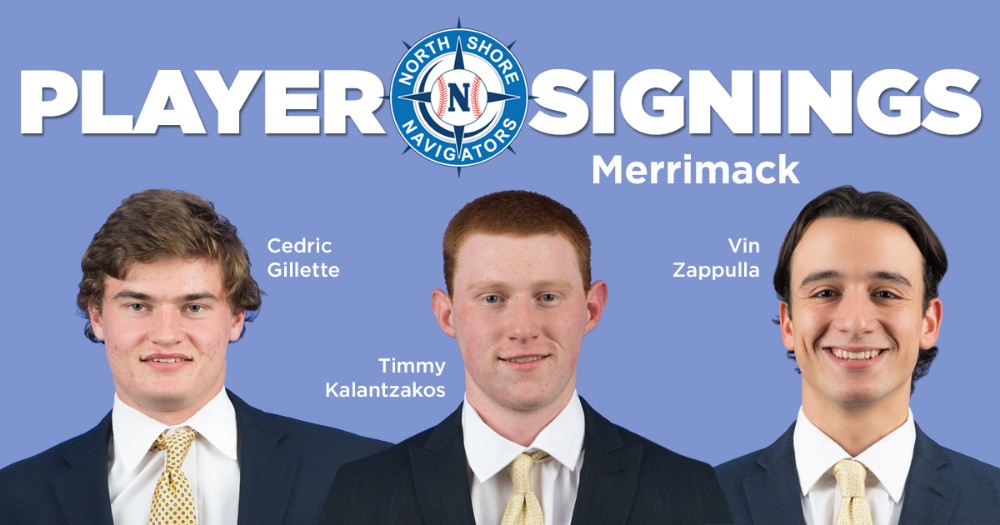 0
Read Time:2 Minute, 30 Second
LYNN, Mass. — The North Shore Navigators added three Merrimack College pitchers to their 2019 roster on Thursday. Andover natives Cedric Gillette and Timmy Kalantzakos will join Warrior teammate Vin Zappulla on the Futures Collegiate Baseball League club this summer.
Director of Player Procurement Joe Gill made the announcement, bringing the total number of official signings for the 2019 season to nine.
“We’re excited to welcome three talented pitchers from a strong local program in Merrimack College, which competes in the highly-competitive Northeast-10 Conference and will move into the Division 1 ranks next year,” said Gill. “The experience that Cedric, Timmy, and Vin will have in the FCBL this summer will serve as a great transition to the D1 level.”
Gillette, a 6-foot-1, 185-pound righty, joins the Warriors this spring after captaining the baseball, football, and basketball teams during a standout career at Andover High School. He pitched five complete games and logged 58 strikeouts in 61 innings for the Golden Warriors last spring, earning All-Star honors from the Eagle-Tribune just as he did in football. Gillette was the male recipient of the paper’s Max Bishop Award, which is given to the area’s top three-sport athletes.
Kalantzakos pitched in 15 games and started six last spring as a Merrimack rookie, going 3-1 with a 4.67 ERA and 43 strikeouts in 54 innings. The 6-foot-1, 190-pound righty allowed only nine earned runs over his final 29 frames, including a complete game to eliminate Southern New Hampshire from NE10 title contention. He was a two-time Merrimack Valley Conference All-Star at Andover, where he also captained the basketball team.
Zappulla earned NE10 All-Rookie Team honors after going 4-4 with a 4.80 ERA in 2018, but two of the Staten Island, N.Y., native’s three complete games came against Southern New Hampshire and New Haven teams that finished the season in the NCAA East Regional field. The 6-foot-1, 175-pounder struck out 44 batters in 54.1 innings last year, which ranks second among Merrimack’s returning pitchers.
Kalantzakos and Zappulla helped Merrimack capture its first NE10 championship in 22 years and post a 31-21 record last spring. Following the upcoming season, the Warriors will compete in Division 1 as members of the Northeast Conference.
As far as Merrimack’s connections to the Navs, Ricky Smith finished out his college career as a two-year captain after catching for North Shore in 2015, while former manager Jon Cahill was one of the Warriors’ assistant coaches. This year’s Merrimack roster also includes left-handed pitcher Sean Thompson who appeared in six games for the Navs last summer after graduating from Central Catholic.
Stay tuned as the Navigators will be announcing more additions to the roster in the coming weeks and months in preparation for the 2019 season. The team’s home opener at Fraser Field is slated for Saturday, June 1.
Facebook
Twitter
Pinterest
LinkedIn