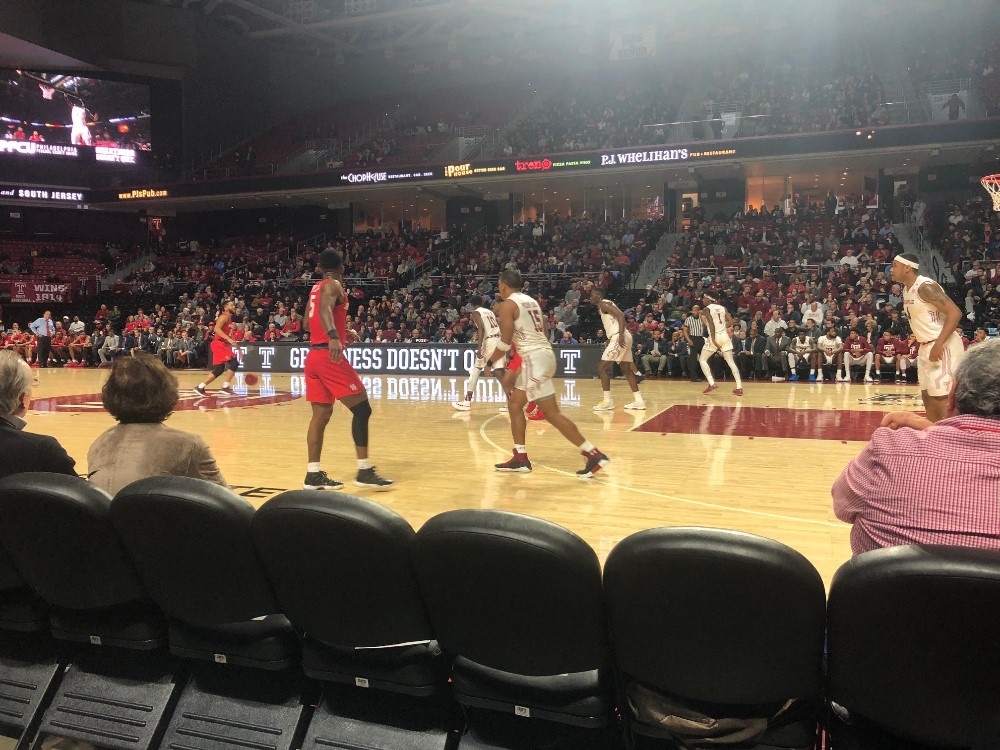 Houston pushed the pace down the court with 7.3 seconds on the clock trailing by two, 71-69, but it was Ernest Aflakpui who bailed out the Owls, by setting his feet, taking the charge and causing Houston to turn it over. Temple then hung onto beat No. 17 University of Houston, 73-69, to hand them their first loss of the season in what ended in a dramatic fashion.

The Owls had the lead for a good portion of the game, but as the closing minutes approached, Houston caught up, providing for a nail-biting finish. The final seconds of the game had many at The Liacouras Center on their feet. Houston’s Corey Davis Jr. brought the ball up court, was easily able to penetrate into the lane, and score what would have been the tying basket. However, Aflakpui was in his way, causing the basket to be negated due to the offensive foul.

Aflakpui talked about the final play.

“I was supposed to clean everything up,” said Aflakpui. “I just got up and took the charge.”

The whistle caused a premature celebration by Temple and their fans. Upon further review, the clock still had 0.6 seconds remaining, in which Temple got it to Nate Pierre-Louis, who was quickly fouled, and he sealed the victory by sinking both free throws.
Quinton Rose touched on the confusion after the charging foul was called.

Temple’s bench during a timeout.

“The ref came over to the bench, before they reviewed it, they said they were just reviewing the time, they knew it was a charge,” said Rose.

Rose and Aflakpui talking to the media post-game.

This was a huge victory for Temple as they beat a ranked team for the first time this season. At the same time, they beat an undefeated conference opponent which helps in the standings. Additionally, they remained unbeaten at home with a 6-0 record.
Aflakpui also touched on the significance of beating an unbeaten team.

“It’s just great that we had the chance to play an unbeaten team and get a win,” Aflakpui said.

Rose led the charge for the Owls, scoring 22 points and shot 9-10 from the free throw line. Pierre-Louis had 18 points, while Shizz Alston, Jr. had 12. Houston’s Breaon Brady ended with 19 points on the night.

Temple struggled late in the game, turnovers being a huge problem for the team, as they struggled to keep the ball out of Houston’s hands. After a few baskets by Brady, and some empty-handed possessions, Temple had to take a timeout with just under two minutes left to play. At this time the Owls led by one, 67-66.

Out of the timeout, Pierre-Louis was fouled and hit both free throws. With a minute remaining, a few Owls were able to come up with a scrappy steal which led to a Rose dunk increasing their lead to five. However, Houston quickly answered with a huge Davis three pointer making it 71-69. Temple went the length of the floor and got called with a shot clock violation with 7.3 left, which set up the final offensive foul that Aflakpui timed perfectly to seal the win.

Temple gave up a 9-0 run to Houston out of the halftime intermission, which really sparked Houston to go on a run. This made the contest closer as the time ticked down. Getting fouled and earning their points at the line was something that proved pivotal in their win. The Owls shot 89.3% from the charity stripe, going 25-28. Pierre-Louis and Rose, who has been struggling, were both 9-10 from the line, while Alston was 4-4.

“I’ve been struggling this season,” said Rose. “To see those free throws go in, hard work paying off, it’s a good feeling.”

With the win, the Owls improve their season record to 12-3, and 2-1 in conference play. The Owls will stay at home for another AAC matchup on Saturday, January 12, against USF. USF is currently 12-3 as well.