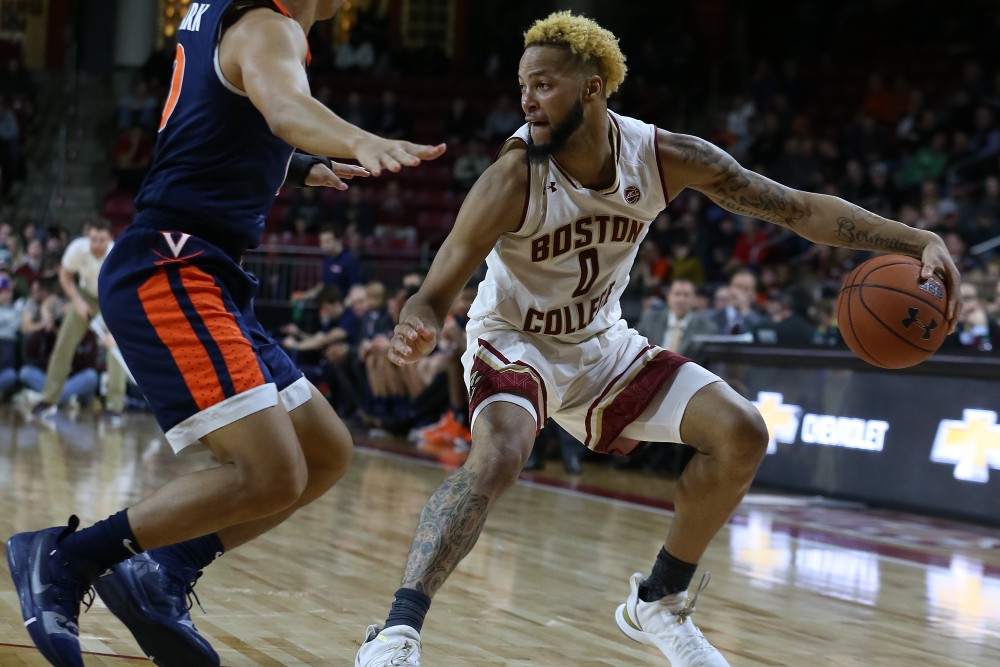 Share
Tweet
Share
Share
Email
Comments
Boston College’s defensive lapses cost the Eagles against an offensively-improved Virginia team in the Cavaliers 83-56 win Wednesday.
Without Steffon Mitchell, still day-to-day with a leg injury, BC was dominated in the interior. This didn’t show up so much in the rebound game, but more so in the number of open layups and dunks for the Cavaliers.
Virginia’s plays were designed to draw the Eagles outside on switches, and too often communication failed and a Cavaliers player was able to roll to the rim for an easy pass inside and score.
At one point in the second half, Virginia had 36 points in the paint to BC’s 41 points in the game.
The Cavaliers also shot well from beyond the arc, despite not needing to chuck up many 3-pointers with all the open looks inside. Virginia attempted 19 3-pointers and made eight of them.
Led by Kyle Guy, Virginia’s offense is finally trending toward championship-caliber, complementing the team’s already-elite defense. Guy is averaging over 15 points per game in his junior season, double his average from freshman year. His success from beyond the 3-point line has been a big boost to the Cavaliers offense. He continues to be overlooked by NBA teams and draft experts, although 26 scouts and two NBA general managers attended Wednesday’s game.
Guy finished with 10 points and was joined by three other Cavaliers in double-digit scoring. De’Andre Hunter and Diakite Mamadi were tied with a game-high 18 and Ty Jerome added 13.
BC entered the half down 43-31, not a bad margin considering the open looks for the Cavaliers. In the second half, the Eagles cut the lead to 6 points before being held scoreless for five minutes and surrendering a 15-2 run that put the game out of reach.
BC couldn’t get into a rhythm on offense all night. Some of that can be attributed to Virginia’s defense, which recently held Florida State to its lowest point total in two decades. Another factor was poor shooting nights from some of BC’s most dependable scorers.
Jordan Chatman has been one of the best 3-point shooters and pure scorers in college basketball during his tenure at BC, but his offensive game has taken a step back this season, partially due to a nagging ankle injury. Chatman is shooting 28 percent from 3-point range; his career low at BC is a tick under 40 percent. He shot 3-of-12 from the field Wednesday, including 1-of-6 from deep.
The return of Wynston Tabbs, BC’s second-leading scorer, was expected to spark the Eagles offense, but the freshman showed some rust after missing a game and a half with the injury. Tabbs scored 9 points on 4-of-9 shooting
One bright spot for BC is the continued improvement of Nik Popovic, especially on the offensive end. The lack of consistent frontcourt play was arguably the biggest question mark for the Eagles heading into the season, but Popovic has emerged as an anchor at the five. Defensively, he’s still prone to lapses on switches and rebound positioning, but the Popovic’s newfound offensive aggressiveness has him trending toward averaging double digits in points for the first time in his career.
Virginia improves to 15-0. After Houston’s loss just prior to tip-off in Chestnut Hill, Virginia remains one of only two undefeated teams left in the nation, along with Michigan.
Next up for the Cavaliers is are games against Clemson and Virginia Tech ahead of the anticipated showdown with Duke on January 19.
The Eagles fall to 9-5, losers of three-straight. BC continues ACC play still looking for its first conference victory Saturday when they face Notre Dame in South Bend.