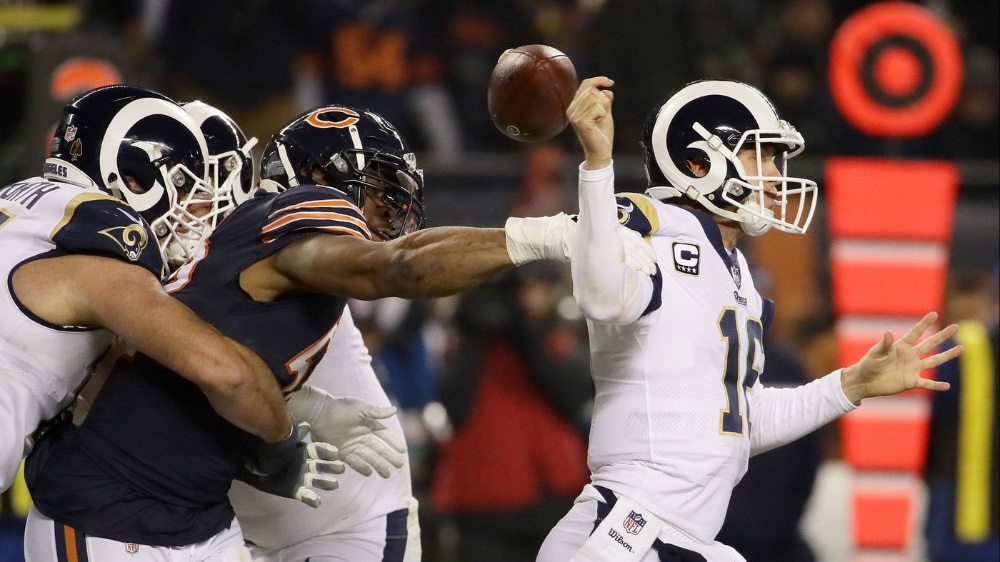 The Chicago Bears clinched their first winning season since 2012 in style, by defeating the 11-1 Los Angeles Rams on Sunday Night Football.

The victory was undoubtedly the most significant for the franchise since a divisional-round playoff victory over the Seattle Seahawks in 2010.

Simultaneously, the statement win over LA on Sunday essentially guaranteed the Bears its first playoff berth since 2010. Especially since Minnesota lost on Monday Night. Now, Chicago needs only one more win or Vikings loss to lock up the NFC North.

The atmosphere at Soldier Field on Sunday night was electric, topping an incredible environment versus Minnesota three weeks ago. As a result of both primetime victories, Bears fans feel on top of the world right now.

With that being said, let’s take a look at what Chicago’s most-recent signature victory indicates about the 2018 Bears. All of which Bears fans will be delighted to learn.

The Chicago Bears are a Super Bowl contender right now, not only in the future.

Since week one, the 2018 season reflected significant progress, as well as good things to come for the future of this franchise.

It is evident that the Bears are a much more dangerous team at home. Obviously, the frigid conditions last Sunday played in Chicago’s favor too. Regardless, there arguably isn’t a better team in football right now than Los Angeles.

I say arguably because the 11-2 Saints, who will most likely stand in the Bears’ way during the playoffs, make an extremely strong case. We all know what the Patriots can do during the postseason as well.

I didn’t say it was going to be easy though, and it won’t. Still, beating LA means the Bears can go toe-to-toe with any team in football. Through 14 weeks, there hasn’t been a game in which Chicago hasn’t had an opportunity to win either.

Facing the Saints at the Superdome would be the most difficult task for the Bears in the playoffs. If that ends up happening, Chicago fans will truly start to ponder the negative consequences of losing so many close regular season games.

The Bears are 9-4, but feel as if they could be at least 10-2 right now. If, say, Chicago didn’t lose in Miami or New York, the Bears could possibly earn home-field advantage over the Saints.

Stopping Drew Brees and his high-powered offense is strenuous, even for the Bears’ inspired defense. Although, as previously mentioned, it isn’t likely that any team will blow past Chicago this year.

The fact that the Bears are at least close to winning every game they play gives them an opportunity to even beat the Saints on the road. Come playoff time, Chicago will be right there in the lone, or few playoff games it plays.

This Defense really may be Chicago’s best since the 1985 season.

There have been some illustrious Bears’ defenses since the Super Bowl shuffling ‘85 Bears’ legendary defensive unit.

The Brian Urlacher, Lance Briggs-led 2006 defense took Chicago to the Super Bowl, despite a well-below average offense. The 1986, ‘87, ‘88 defense, with many pieces from 1985 still intact, were obviously stout as well.

Whether you believe this defense is better than those previously mentioned, a logical argument can be provided for such. That reflects just how impressive Chicago’s defense is right now.

The Rams were averaging 34.9 points per game before getting shut down by the Bears. Los Angeles’ ridiculous scoring rate ranked second best in the NFL, slightly behind Kansas City.

Holding LA to six points after the Rams had scored at least 30 in 10 games says enough about how good Chicago’s D is.

Though there have been a few blips on the radar, last Sunday proves Chicago’s defense is still improving. Equally as important, the performance indicates the ability for the defense to step up in crucial circumstances.

Fourth quarter defense was Chicago’s biggest issue leading into last week. Well, the Bears shut LA out in the second half. This should give the D even more confidence moving forward.

Plain and simple, the Bears possess a hand full of defensive players who are performing at an elite level compared to the rest of the league.

Obviously, we are all aware of Khalil Mack’s impact, and how his leadership has greatly influenced the defense as a whole. The list of impact defensive players goes on though.

Cornerback Kyle Fuller leads the NFL with seven interceptions. Close behind Fuller is second-year safety Eddie Jackson, who has five interceptions and might be the best at his position in all of football right now.

Besides reminding fans of the William “Fridge” Perry days with a goalline touchdown, defensive tackle Akiem Hicks has led vocally and by example in what has been his best NFL season.

There are more players worth mentioning here. But, you get the point. The talent and production run deep in Chicago defensively. This is the case even in light of nickel-cornerback Bryce Callahan’s season-ending injury.

Luckily, the Bears have cornerback depth unlike most teams. Callahan’s backup, Sherrick McManis, led Chicago with seven second-half tackles against the Rams after Callahan suffered the injury. The loss definitely hurts Chicago. But, McManis should be able to compensate.

The team chemistry is right where it needs to be, and it could increase further very soon.

Trubisky played poorly against the Rams. The offense hasn’t consistently clicked like the defense has this season in general. Still, not even offensive players have lacked confidence this season.

The Bears are an extremely confident group. When things aren’t going their way, they keep their heads up. A perfect example of this was when the Bears’ somehow took the Giants into overtime.

This resiliency is necessary if a lengthy playoff run is going to be achieved. Especially with an offense that is out of sync at times.

Team morale is definitely through the roof from beating Los Angeles. Coming off a heartbreaking defeat in New York, this is great to see from a mentality perspective.

Though the Rams win alone can’t really be topped in the regular season, confidence in the locker room would continue to soar with a victory this coming Sunday.

The Packers might be struggling more than usual right now. But, Green Bay still shouldn’t be taken lightly with Aaron Rodgers under center.

Snapping Green Bay’s five-game winning streak over the Bears would feel great for both players and fans. It would feel even better when taking Chicago’s week one, fourth quarter collapse against Green Bay into consideration.