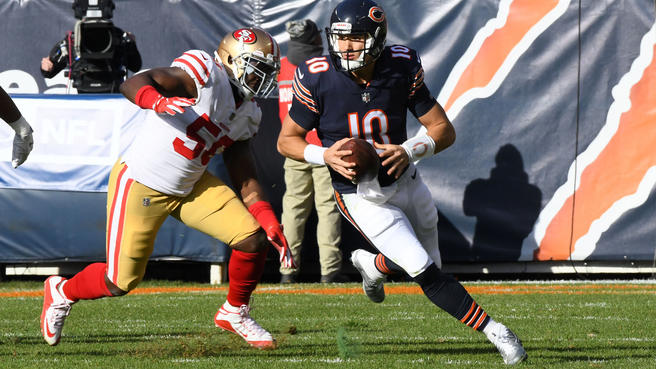 The Chicago Bears will play meaningful football in week 17 with the division title already locked up.

That is a sentence even the more optimistic Bears fans wouldn’t have guaranteed heading into the 2018 season.

Chicago can trade places with LA in the NFC and earn a first-round bye if it can defeat the Vikings in Minnesota. Additionally, the Bears have the opportunity to knock their division rivals out of the playoffs with a victory on Sunday.

Both of these possibilities, however, cannot solely be controlled by the Bears. For Chicago to earn a bye, the Rams also have to lose to the 49ers at home. For the Vikings to miss the playoffs, Philly has to knock off Washington as well.

Though tarnishing Minnesota’s playoff aspirations isn’t something Nagy and Co will complain about, the top priority in week 17 is sneaking away with the second overall seed.

As a result, the Bears will cease to play Sunday’s game safe. Chicago’s starters will play against the Vikings, and most likely won’t hold anything back.

Let’s take a look at the three things to keep your eye on as the Bears close out the 2018 regular season against the Vikings.

Trubisky going down with an injury this week would be devastating for Chicago. Even with a stout defense, it is tough to imagine the Bears making a playoff run with Chase Daniel under center.

I agree with Nagy’s decision in gunning for a victory against Minnesota. However, it is even more critical to keep everyone healthy. Specifically, Chicago’s starting quarterback, who suffered his previous injury against the Vikings in week 11 on an illegal hit.

Minnesota is desperate right now and is going to lay everything on the line against Chicago. No aggression or physicality will be withdrawn from the Vikings’ solid defensive unit.

They already injured Mitch once, and it could happen again. Whether on an illegal hit or a clean one.

The Bears need to prioritize protecting their quarterback against a feisty ball club who will be scratching and clawing for a victory.

I won’t go as far to say that Chicago shouldn’t let Mitch scramble in an attempt to avoid any detrimental hits downfield. Although, the coaching staff needs to emphasize to Trubisky that if, and when, he runs, he slides earlier than he usually would.

Chicago’s odds of making it to the Super Bowl are as high as any team in the NFL. But, this wouldn’t be the case without its starting quarterback.

The score of the Rams game.

Inconveniently, the Bears and Rams are both slotted for late afternoon games this coming Sunday.

Ideally, for Chicago, LA would kickoff at noon, with the Bears still hours away from game time. If this were the case, the Bears would know if it is necessary to play their starters or not.

Still, Chicago coaches and players will be checking in on the Rams score frequently on Sunday.

If LA gets out to an early lead, the Bears could be inclined to take their starters out. There would be no reason not to. If LA runs away with a victory in the first half, Nagy keeping his starters in would be an unnecessary risk, to say the least.

Bears fans are unanimous in agreeing upon the fact that Trubisky will be Chicago’s X-factor in the playoffs. If Mitch plays well, the Bears’ odds are great. Simultaneously, Trubisky throwing three picks in a playoff game could doom Chicago.

The next guy up in this category is Bears kicker, Cody Parkey.

Despite earning a contract worth around $9 million in the offseason, making him the third-highest paid kicker in the league, Parkey has done little to gain Bears fans’ trust.

When Parkey is on, he is solid. But, there have been too many occurrences in which Parkey has let the moment get to him. Or, circumstances in which the fifth-year kicker just doesn’t have it. That seemed to be the case in San Francisco last week when Parkey missed a 37-yard field goal attempt.

Overall, Parkey is only the 16th most-efficient kicker in the NFL this season. Chicago’s kicker has converted 22-29 field goal attempts.

Four of Parkey’s misses have come from 40 yards or further. The element of Parkey’s stats that sticks out as alarming the most is that he has missed three field goals from inside 40 yards.

Parkey is indeed a wild card, and that is not what you want in the playoffs.

I’m sure Vikings fans will never forget Blair Walsh’s botched chip shot from 27 yards out, that would have sent Minnesota to the divisional round of the playoffs a few seasons ago.

I genuinely believe that Parkey possesses the potential to bounce back next season and become a trusted kicker in Chicago. He will have to work on the mental aspects of his game though.

Completely turning his mindset around may not be possible to achieve until the offseason for Parkey. After all, transitioning to playoff football isn’t exactly the most comfortable time to take a deep breath and relax.

However, I still think Parkey is capable of getting into a rhythm that lasts long enough not to hurt Chicago in the playoffs. He has had momentum a few times this season. Parkey made 8-9 field goals to begin the season. A few weeks ago, the kicker had a streak of eight straight going.

The first step in capturing this momentum again would be to go out and finish the season on a high note against the Vikings.

Given Minnesota’s defensive effectiveness in the red zone, Parkey almost certainly will have the opportunity to split the uprights a few times.

If Parkey converts three or four field goals against the Vikings, not only will Bears fans be confident in their kicker heading into the playoffs, Parkey will be in himself.

For a streaky kicker like Chicago’s, confidence is significant above all.