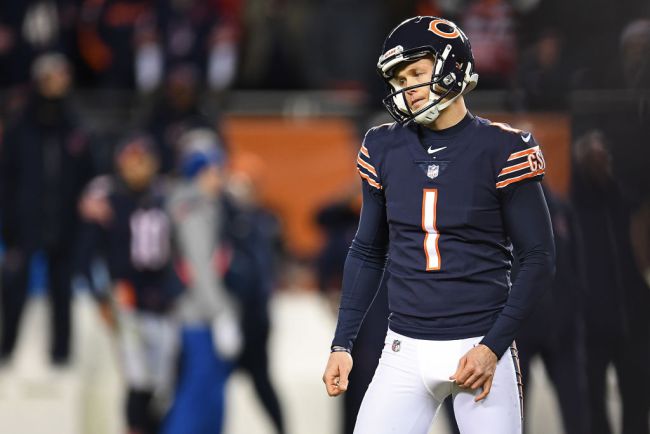 Cody Parkey missing a field goal to lose a playoff game became a relevant thought when the fifth-year kicker “doinked” four off the left post against the Lions earlier this season.

In the week leading up to the playoffs, every Chicagoan worried about a scenario in which the Bears’ kicker had to convert a kick to beat Philly. Chicago fans didn’t imagine the game would actually reach the point in which Parkey’s services were required to move on.

The Bears entered the Wild Card Round as 6.5-point favorites, representing the largest spread of all playoff games at hand. Not to mention Chicago entered the game with some serious momentum, having won nine of its last ten games,

When the “double-doink” occurred, it felt like an alternate reality. As much as Parkey was a worry, he converted three field goals prior in the game. He even split the uprights minutes before, simultaneous to an Eagles timeout.

Six days later, Chicago is still in a state of shock. I personally have re-watched the kick, unrealistically hoping for a different outcome.

When the Cowboys and Rams kickoff on Saturday night is when the confusion will halt, and Bears fans will be forced to accept their season has reached the end.

The emotions following the playoff loss are not what one would expect heading into the season. The Bears organization achieved everything necessary for fans to be optimistic about the future, and content with the season’s conclusion.

Think about it, Chicago snapped a seven-year playoff drought and improved from 5-11 to 12-4 in its first season under a new head coach.

Any Bears fan would be ecstatic if he/she heard such in September. And it is weird to think Chicago fans would probably feel more hopeful about the future right now if their team competed well this season, but missed the playoffs with a 9-7 record.

Chicago fans seem to be acting spoiled. What more could one ask from the organization?

I still don’t blame Bears fans. Regardless of the optimal amount of progress made, the final loss hurt.

The future is undoubtedly bright. Even without Vic Fangio, the Bears defense will be a top-five unit next year. A more-developed Mitchell Trubisky will bode the balance of the team as well.

I’ve compared the Bears to the 2015 Chicago Cubs numerous times, and I stand by that. Both teams exceeded expectations under a first-year head coach to hint at things to come.

A glass-half-full Bears fan would point to the achievements of the organization, while a glass-half-empty one would plague this season’s outcome as a missed opportunity.

Illinois features many pessimistic fans at the moment. Though this number will likely decrease in the coming months, there weren’t very many Cubs fans with a negative outlook after the Mets swept Chicago in the 2015 NLCS.

Why? Because the trends of success within the MLB are vastly different than the NFL and much harder to predict. Which is why I will acknowledge the Bears’ success in 2018, but also stick with those fans who believe Chicago missed a prime opportunity.

The competitiveness in the NFL is significantly higher than any other American professional sport. Any team can beat any team. The number of opponents who provide an easy victory seems to decrease each season. After all, besides the Arizona Cardinals, there weren’t any “safe” opponents in 2018.

The unpredictability in football has reached an all-time high. Still, certain teams’ schedules feature more winnable games than others. Chicago had one of the easiest schedules in football this season.

Unfortunately, next year the Bears appear to have one of the most challenging schedules. Outside of the division, Chicago will play the Dallas Cowboys, Philadelphia Eagles, Denver Broncos, Kansas City Chiefs, Los Angeles Chargers, Los Angeles Rams, and New Orleans Saints. Six of which are currently in the playoffs.

So, paired with the increasing level of competitiveness amongst the league is a strenuous slate of games for the 2019 Bears.

It isn’t unrealistic for Chicago to noticeably improve next season but win only eight or nine games. The Bears will be back in the playoffs sooner rather than later. However, next season isn’t a guarantee when considering their opponents.

The abrupt ending of the 2018 season was also a squandered chance, and honestly, a surprise because Chicago captured a rare level of chemistry and momentum.

The passion exhibited by the Bears was eerily similar to the Eagles of last season, or Pete Carroll’s 2013 Seahawks. No matter how talented a team is, the amount of inspiration the Bears achieved is no simple task, and even more difficult to replicate.

Most Bears fans would argue without crucial injuries, the Bears wouldn’t have been forced to rely on their shaky kicker in the closing seconds. I wouldn’t disagree.

Adam Shaheen didn’t come close to compensating for the strange loss of Trey Burton. The Eagles offense took advantage of no Eddie Jackson in the backfield as well.

Although, compared to most other teams, the Bears were exceptionally healthy. Considering how aggressive Fangio’s defense played, it is hard to imagine Chicago’s stout defensive unit avoiding injury next season similar to how it did this season.

It is finally a good time to be a Bears fan. There is no doubt about that. Surpassing preseason expectations should excite the average fan, not deter the attention from what Chicago missed out on.

The Bears are set up nicely under Matt Nagy. However, the rest of the league is out of their control. Chicago was blowout-proof in 2018, capable of beating anyone it faced.

Other teams are going to improve though. So, who knows where the Bears will stack up against the rest of the league in 2019. For one, back-to-back down years from most teams in the NFC North isn’t likely.

It stings right now, and the unknown road ahead salts the wound further. Nonetheless, it’s almost inevitable the Bears will be back in the playoffs soon, whether next season or not. So, keep your heads up Chicago fans.