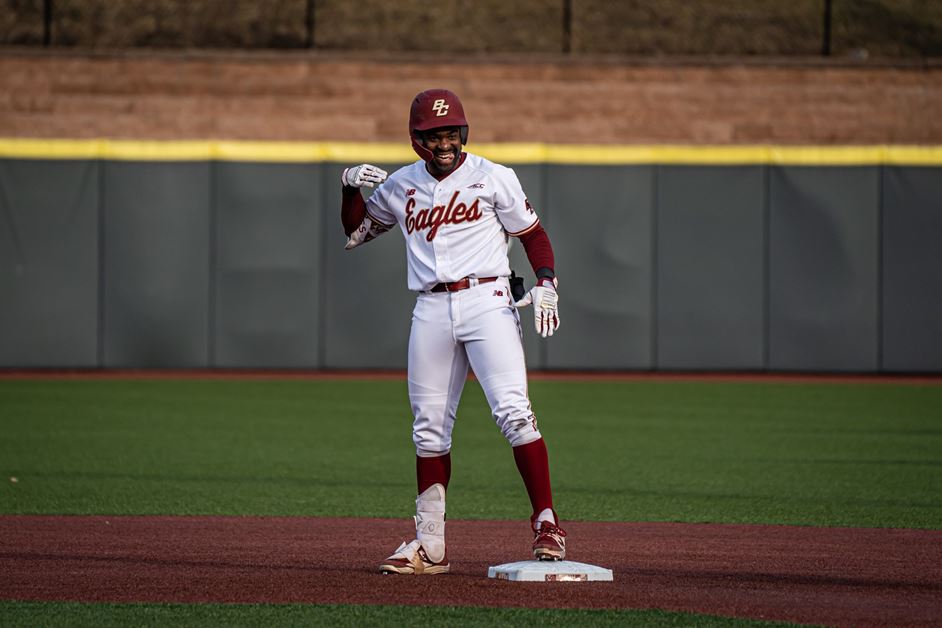 BRIGHTON, Mass. – The Boston College baseball team evened its series against Pittsburgh with a 9-8 win at the Harrington Athletics Village on Saturday night. After several rain delays for a scheduled 2 p.m. start, the Eagles (14-17, 3-11 ACC) and the Panthers (17-12, 6-7) got underway at 5:30.

BC held its largest lead at 9-4 after a two-run double by graduate left fielder Rafe Chaumette (Sugar Land, Texas) provided insurance for graduate closer Brendan Coffey (Saratoga Spring, N.Y.), who pitched the top of the eighth with a three-run lead.

A walk and a pair of one-out errors on the BC infield loaded the bases in the top of the ninth. Pitt closed the gap to a run with a bases-clearing double by second baseman Jeffrey Wehler and a single to center by catcher Tatum Levins. Coffey escaped the jam and put the finishing touches on his third save a batter later with a game-ending double play.

Chaumette went 2-for-5 with two doubles out of the Eagles’ leadoff spot; hitting his first double in the first and scoring to give BC an early 1-0 lead in a two-run frame. Sophomore first baseman Joe Vetrano (Shrub Oak, N.Y.) tripled twice in a 3-for-4 effort. His first triple gave BC a 3-0 lead in the third.

After the Panthers rallied to take the lead with a four-run fourth, the Eagles answered with a four-run sixth. Sophomore Travis Honeyman (Massapequa, N.Y.) came on to pinch-hit with two runners in scoring position and delivered a game-tying single through the right side, despite limping to the plate on an injured right foot.

Three batters later the bases were loaded and junior center fielder Barry Walsh (Sterling, Mass.) cleared them with a double down the left-field line.

Graduate right-hander Henry Leake (Burbank, Calif.) started and went three innings for BC with three runs allowed on just one hit, but three walks to three strikeouts. Sophomore RHP Joey Ryan (Norwood, Mass.) followed with three innings of work. Ryan (2-2) got the win, as he bounced back from giving up a go-ahead home run to Levins in the fourth, with one run allowed on three hits and one strikeout.

Righty Logan Evans (3-3) lasted 5.1 innings for Pitt. He was tagged with five runs on seven hits and two walks with four strikeouts.

BC HIGHLIGHTS
·       The Eagles scored twice in the first on a sacrifice fly and a Landwehr RBI-double.
·       Vetrano tripled in a run to push the BC lead to 3-0 in the third.
·       Trailing by a run in the sixth, Honeyman came on for a game-tying, pinch-hit single through the right side.
·       The Eagles totaled four runs in the sixth as Walsh capped the scoring with a bases-loaded, three-run double down the left-field line.
·       BC added two insurance runs with a two-out double to right-center by Chaumette.

UP NEXT
Senior right-hander Mason Pelio (San Diego, Calif.) gets the ball in the rubber match Sunday at 1 p.m. on ACCNX.