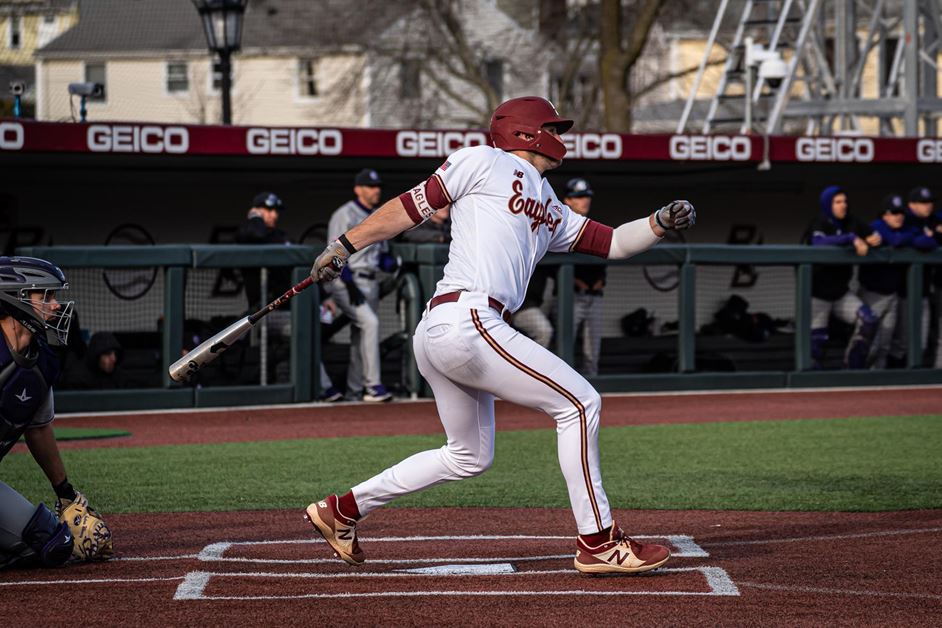 BRIGHTON, Mass. – The Boston College baseball team hit six home runs in a 16-4 win over Merrimack at the Harrington Athletics Village on Wednesday evening. The Eagles improved to 11-14 on the season and head towards a weekend ACC series at home against Wake Forest off back-to-back wins.

Sophomore first baseman Joe Vetrano (Shrub Oak, N.Y.) drove in six runs on a pair of three-run homers, including one in the first to start the scoring. Sophomore right fielder Cameron Leary (Bethpage, N.Y.) doubled BC’s early lead with a grand slam in the second to make it 8-0.

Freshman right-hander Luke Delongchamp (Holden, Mass.) got the win in a five-inning start. He fired five-shutout innings of one-hit ball with four strikeouts. Delongchamp (1-0) retired 11 in a row at one point beginning with an inning-ending double play in the top of the first.

Leary added three walks in a 2-for-2 performance with four runs scored and four driven in. Junior second baseman Luke Gold (Ballston, N.Y.) went 2-for-4 with an RBI double.

BC HIGHLIGHTS
·       Vetrano plated the first runs of the day on a three-run home run to center in the first inning.
·       Leary hit a second-inning grand slam to double BC’s lead in the second and make it 8-0.
·       McNulty and Baruch hit solo home runs in the third and fifth to push the lead to 10-0.
·       The Eagles totaled six runs in the fifth, adding a three-run Vetrano home run and a two-run Stalman home run.