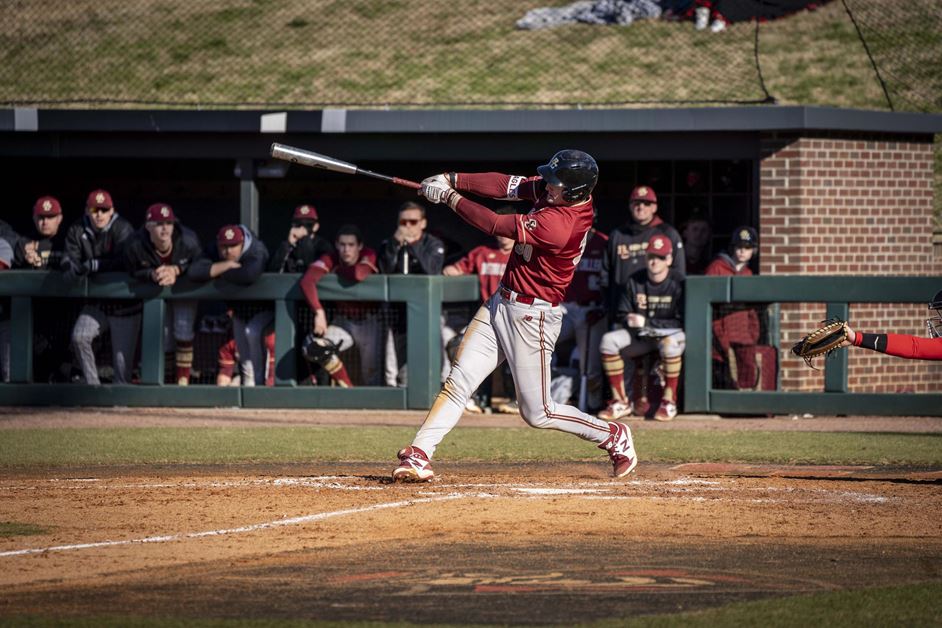 JACKSONVILLE, Fla. – The Boston College baseball team rallied for four runs down after the seventh to beat North Florida 10-4 at Harmon Stadium on Saturday afternoon. The Eagles, who have won back-to-back games for the first time this season, improved to 4-4.

BC had just one hit in the first seven innings before tallying 10 runs on 11 hits in the final two innings. The Eagles used five hits in the eighth to pull even at 4-4, including a game-tying, three-run home run to center field off the bat of junior catcher Parker Landwehr (Baltimore, Md.).

In the top of the ninth, BC loaded the bases with no outs and took its first lead of the day on a two-run double by junior second baseman Luke Gold (Ballston, N.Y.). Sophomore first baseman Joe Vetrano (Shrub Oak. N.Y.) doubled the Eagle lead with a double of his own before BC plated two more runs to finish the inning.

Trailing 4-0 through four, sophomore RHP Joey Ryan (Norwood, Mass.) came on from the Boston College bullpen and turned in three-scoreless innings to keep BC in the game, despite the offense going hitless between the second and seventh innings. Eagle relievers totaled 5.2-shutout innings with just one hit and no walks. Sophomore RHP John West (Shrewsbury, Mass.) was the first reliever of the day and retired the only two batters he faced to get BC out of a fourth-inning jam.

Graduate right-hander Brendan Coffey (Saratoga Springs, N.Y.) entered with the score tied 4-4 for the eighth. Coffey (1-1) got the win with a perfect inning of work, including one strikeout.

Freshman right-hander Sean Hard (Mahwah, N.J.) went just 3.1 innings in the start for BC. He gave up four runs on four hits, including two solo home runs, and four walks with five strikeouts. UNF lefty Zach Chappell went five-scoreless innings striking out seven with four walks and a hit. The Eagles loaded the bases against Chappell with one away in the first, but he struck out two to strand three and proceeded to retire 12 in a row.

North Florida center fielder Justin Holmes and catcher Dallen Leach hit leadoff home runs off Hard in the first and fourth, respectively. Righty Jason Gonzalez gave up four runs in his third inning of relief, while Darin Kilfoyl (0-2) allowed three runs without recording an out in the loss.

BC HIGHLIGHTS
·       Honeyman got the offense going with a leadoff single in the eighth and scored the first BC run of the day on a Vetrano double to cut the deficit to 4-1.
·       Landwehr tied the game in the eighth with a three-run home run to center.
·       Aidan Harrington and Honeyman singled to set the table with runners on the corners in the ninth.
·       With the bases loaded, Gold gave BC its first lead on a two-run double down the left-field line.
·       Vetrano’s second double brought in two more and Landwehr hustled out an infield single as a run came in on an errant throw to push the Eagles’ lead to 9-4.

UP NEXT
Senior right-hander Mason Pelio (San Diego, Calif.) makes his season debut Sunday in the series finale at 1 p.m.