USF Bulls: A Promising Move in The Right Direction versus Cincinnati 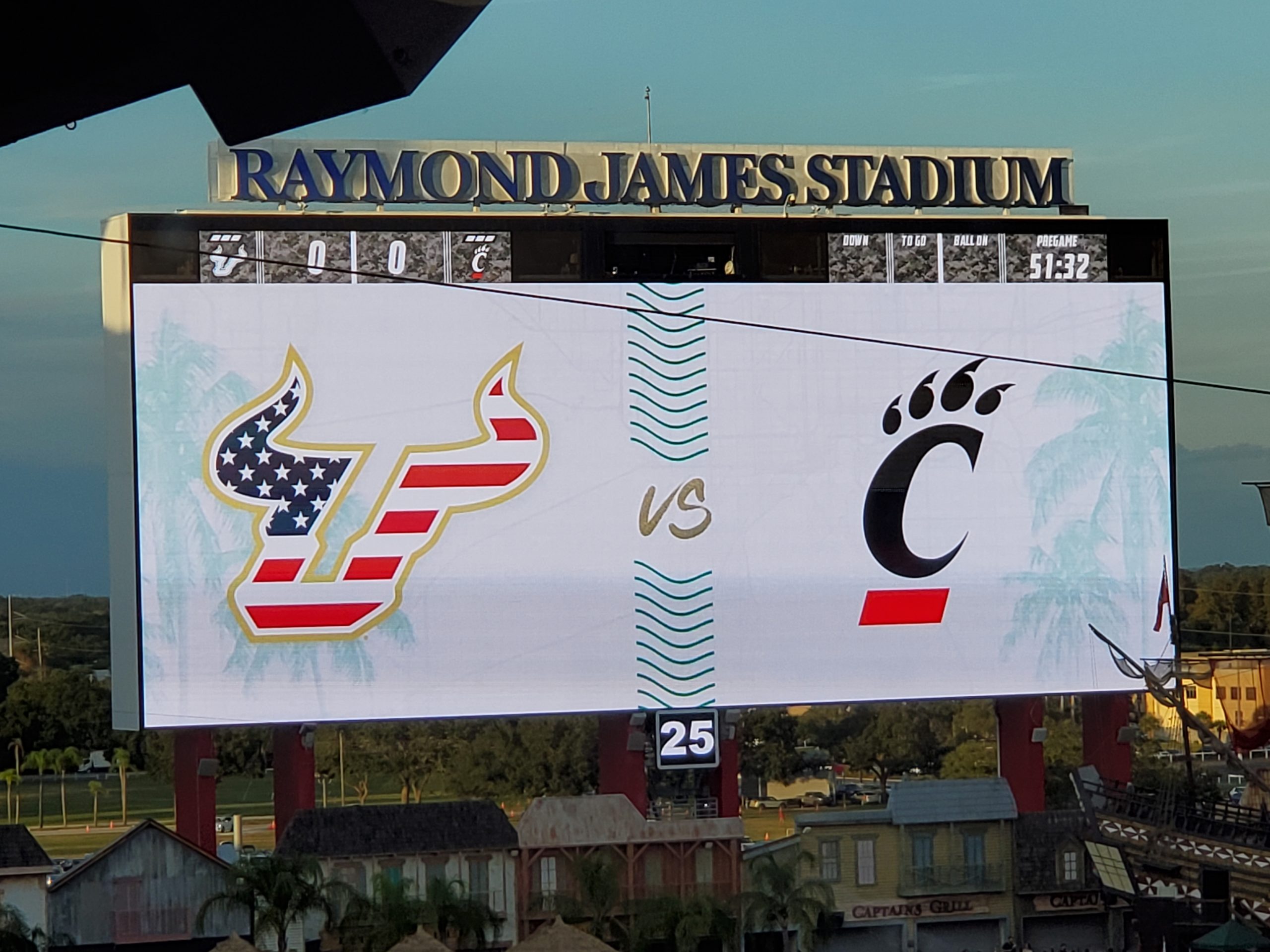 Under an early evening partly cloudy sky, the USF Bulls hosted the Cincinnati Bearcats. The Bearcats are the number two team in the country. This was the highest-ranked team to ever play at Raymond James Stadium. It was a crowd with many wearing red and black. Before the opening kickoff, they had three parachutes from the acting military and they all landed near the Bulls logo in the middle of the field. It was also cool to see senior night and 10,000 military families in attendance the day after Veterans Day. USF was wearing a red, white, and blue theme on their jerseys as well. This was the last home game for USF in 2021 and it was great to see fans again in the stands considering that I attended a game last year where there were no fans in the stands. USF would need a perfect game to beat Cincinnati.

The USF Bulls would cause two early turnovers, a fumble, and an interception. After the Bulls recovered their fumble on the very next play, they would fumble it back to the Bearcats. Cincinnati then would have Heisman trophy candidate Desmond Ridder throw an interception that USF nearly took to the house. Just one play later they would have Jaren Mangham score his 14th rushing touchdown of the year tying Marlon Mack for second all-time in program history. As the game entered the second quarter the game was tied at seven. The Bearcats defense stifled the Bulls on offense. With that, they were able to take a 24-7 lead into the half. The best part is that they would receive the ball to start the second half. The Bulls played a solid first half so what adjustments were made in the second half?

It did not take long for the Bearcats to score putting the USF Bulls in a 31-7 deficit. The Bulls answered with Mangham’s 15th rushing touchdown to make it 31-14. The Bulls made a defensive stop that sprung the offense. McClain hit Jimmy Horne Jr. on an 80-yard touchdown pass to cut the deficit to 31-21. As the quarter changed it did not take long for Cincinnati to answer right back with a touchdown bringing the score to 38-21. USF fumbled a kickoff that was recovered by the Bearcats. USF was able to get another turnover. They would take the ball down the field and pull within 10 points, 38-28. This touchdown was from Timmy McClain on a two-yard run. The Bulls had the ball with a chance to cut into the lead with about three minutes left in the game.

This was one of the games that USF Bulls could’ve but ended in the woulda shoulda category. They had an average first half which on a normal basis they thrive in. They came out in the second half playing better. The Bulls caused three Cincinnati Bearcats turnovers. They did not play a bad game but did not have enough to win it. This team, to me, is so close. One of the biggest flaws is missed tackles. Once again, the Bulls had so many that could have changed the outcome of the game. The Bearcats play a second straight close game and escape with a 45-28 win. The Bulls have two road games left in the season with the next one against the Tulane Green Wave followed by the in-state rival UCF Knights.