Forgetting How to Be a Good Teammate 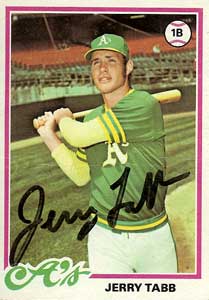 For the past 12 years, I have attempted to help a group of retirees who are not receiving Major League Baseball (MLB) pensions. Men like Altus, Oklahoma native Jerry Lynn Tabb, 71, who won the College World Series Most Valuable Player Award when he attended the University of Tulsa as a freshman in 1971.

Drafted with the 16th pick in the first round of the 1973 amateur draft, Tabb played with the Chicago Cubs and Oakland Athletics during his career.

Future Montreal Expos pitcher Steve Rogers was a teammate of Tabb’s on that ‘71 squad, as was outfielder Steve Bowling, who now lives in Jenks, Oklahoma,

But Rogers has forgotten how to be a good teammate, let alone a decent person. That’s because he is currently working as the pensions liaison to the union representing today’s ballplayers, the Major League Baseball Players Association (MLBPA).

I say he has forgotten because, due to a vesting change in 1980, ballplayers only now need 43 game days of service on an active MLB roster to be eligible to receive a MLB pension.  But men like Taub and Bowling, who each had more than 43 game days of service but less than four years, were not retroactively included in that brokered agreement and, therefore, are ineligible to receive a pension, which is worth as much as $230,000, according to the Internal Revenue Service.

As the National League Players’ Representative in 1980, Rogers sold both his ex-teammates and hundreds of other men down the river when he agreed to that deal.

At the Hall of Fame’s recent induction ceremony, on Wednesday, September 8, I was reminded of that treachery when Don Fehr got up to accept the late Marvin Miller’s posthumous plaque. Fehr — who if you’ve read my book, couldn’t have been more mean-spirited about this sad chapter in labor relations – made it sound like Miller was Christ, Mother Teresa and the Dalai Lama all rolled into one.

Listen, Miller was an exceptional labor economist and a great man. But he was flawed, like all of us. Even he told me, on Veterans Day in November 2009 no less, that if he had to do it all over again, he would have insisted on retroactivity for all the men like Tabb and Bowling.

In April 2011, MLB and MLBPA partially remedied this situation by giving all the non-vested men like Taub and Bowling an annual stipend of $625 for every 43 game days of service they did have, up to $10,000. And that’s before taxes are taken out.

But the bone the men were thrown dies with them. Those monies cannot be passed on to a widow, child or other designated beneficiary, which a real pension allows.

Even though the players’ welfare and benefits fund is worth more than $4.5 billion, the executive director of the MLBPA, Tony Clark, has never commented about these non-vested retirees, many of whom are filing for bankruptcy at advanced ages, having banks foreclose on their homes and are so sickly and poor that they cannot afford adequate health care coverage.

If you’re wondering why you haven’t heard or read about this matter before, many sportswriters, columnists, and broadcasters don’t want to report about this for fear of loss of access.

That isn’t hyperbole.  A former Deadspin reporter once told me he was eager to pursue this story because he believed the MLBPA was guilty of “fiscal malfeasance.” Since he subsequently stopped responding to my emails and calls, what am I to think?

In his book The Game, Jon Pessah called it “willful ignorance” to describe the free pass the Fourth Estate gave to MLB and MLBPA over the use of steroids in the national pastime in the 1990s.

That is exactly how I feel regarding this issue.

As Marc Eisenberg, author of the Money Players Blog, once wrote, “Current players should continue to fight for greater retirement and health benefits for former athletes, not just for recent retirees. All professional athletes should keep in mind that they will be active, voting members of the Players Association for just a few years, but they will be retired players for decades.”

Today’s players need to remember that.

Douglas J. Gladstone is a freelance magazine writer and author of two books, including “A Bitter Cup of Coffee; How MLB & the Players Association Threw 874 Retirees a Curve”