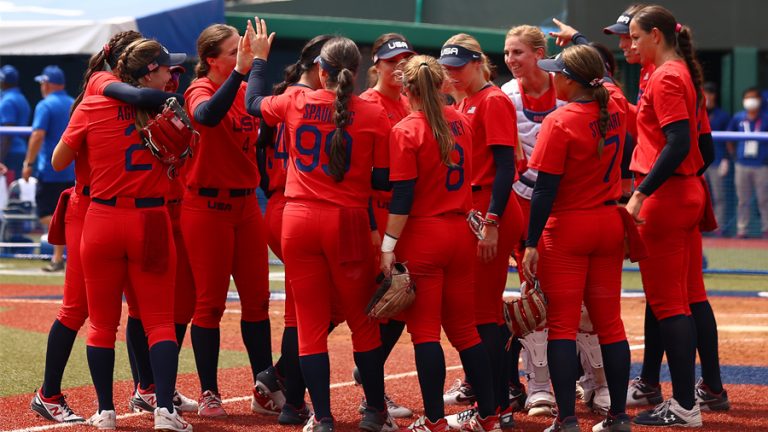 TOKYO, Japan –– The U.S. Olympic Softball Team returned to the Olympic stage in shutout fashion today as the Red, White and Blue posted a 2-0 victory over No. 9 Italy in their Tokyo 2020 Olympic debut. Highlighting the day was Michelle Moultrie (Jacksonville, Fla.) who put the Eagles on the board first with an RBI single while starting pitcher Cat Osterman (Houston, Texas) posted a nine-strikeout performance before Monica Abbott (Salinas, Calif.) closed out the win in the seventh inning.

“It was great for the team to start the tournament off with a win against a gritty opponent,” said U.S. Olympic Softball Team Head Coach, Ken Eriksen. “We haven’t played against Italy since 2014 and it’s obvious they play a higher-level game than they did 7 years ago. They have been through a tough time with the untimely death of their Coach a few months back, and I give the current staff and the players a tremendous amount of credit and respect for what they are doing.”

“Cat did her job keeping Italy at zero long enough for us to score first,” he added. “It was nice to see Monica come in and shut the door at the end and we also give Aubree Munro a lot of credit behind the plate.”

Osterman came out firing in the top of the first, issuing two quick strikeouts before allowing a runner to reach base on a hit-by-pitch. The runner showed no threat, though, as a fly out to Ali Aguilar (Orangevale, Calif.) sent the U.S. to the plate for their first Olympic at-bat since 2008. Haylie McCleney (Morris, Ala.) ripped a hard ground ball to third base to force an error and give Team USA their first baserunner of the game. A walk to Valerie Arioto (Pleasanton, Calif.) would put another runner on for the U.S. but three ground outs would keep the Eagles at bay.

Both sides were retired through the second and third innings with Osterman tacking on two more strikeouts before issuing a 1-2-3 inning in the top of the fourth. The bottom of the frame brought in Team USA’s first run of the game with base hits from USA Softball veterans, Arioto and Moultrie, who have led the U.S. since 2011 when softball’s future at the Olympics was put on hold. Arioto started things off with a single before advancing to second base on a sac-bunt from Aguilar. With a runner in scoring position, Moultrie stepped into the box and sent a laser into right field to plate Arioto and give the U.S. a one-run edge.

Italy managed to put their leadoff batter on base to start the fifth, but Osterman and the U.S. defense remained solid to leave the runner stranded and maintain the 1-0 lead. Team USA added a run to the board in the bottom of the inning with Aubree Munro (Brea, Calif.) reaching base on an infield single before advancing to second on a throwing error by the Italy defense. McCleney followed suit with a single through the left side to put runners on first and third for Janie Reed (Placentia, Calif) who sent a deep sac-fly to the outfield to plate Munro and extend the U.S. lead, 2-0.

Osterman continued dealing in the bottom of the sixth with two strikeouts and a fly-out before Italy returned the favor in the bottom of the frame, retiring the U.S. in order to send the game to the seventh. Abbott took over pitching duties for the final three-outs of the contest, leaving the Italy defense with no chance as the lefty retired the side in order via three-straight strikeouts. The 1-2-3 seventh inning secured the 2-0 shutout win for the Red, White, and Blue, improving the overall number of Olympic shut-out wins for Team USA to 26.

The U.S. offense combined for five hits in the Olympic opener with Arioto, Chidester, McCleney, Moultrie, and Munro each tallying one hit apiece in their Olympic debuts, while Reed and Moultrie each picked up an RBI. In the circle, Osterman and Abbott returned to the Olympic stage after a 13 -year hiatus and took control with a combined 12 strikeouts.

“It was exciting to get out on the field with this team for Game 1,” said Osterman. “We battled well and kept building our momentum throughout the game. It was my goal to get us a good start to the game to set the tone and I’m really happy with the way we all performed today.”

Team USA is back in action tomorrow, July 22 at 9 a.m. JT (July 21 at 8 p.m. ET) against No. 3 Canada as their quest to the Gold Medal continues. Fans from across the globe can follow along with the Olympic Softball competition through LIVE broadcasts on NBC Sports Network (NBCSN) and CNBC in addition to a live stream available on NBCOlympics.com and the NBC Sports app. Live stats are also available on USASoftball.com.