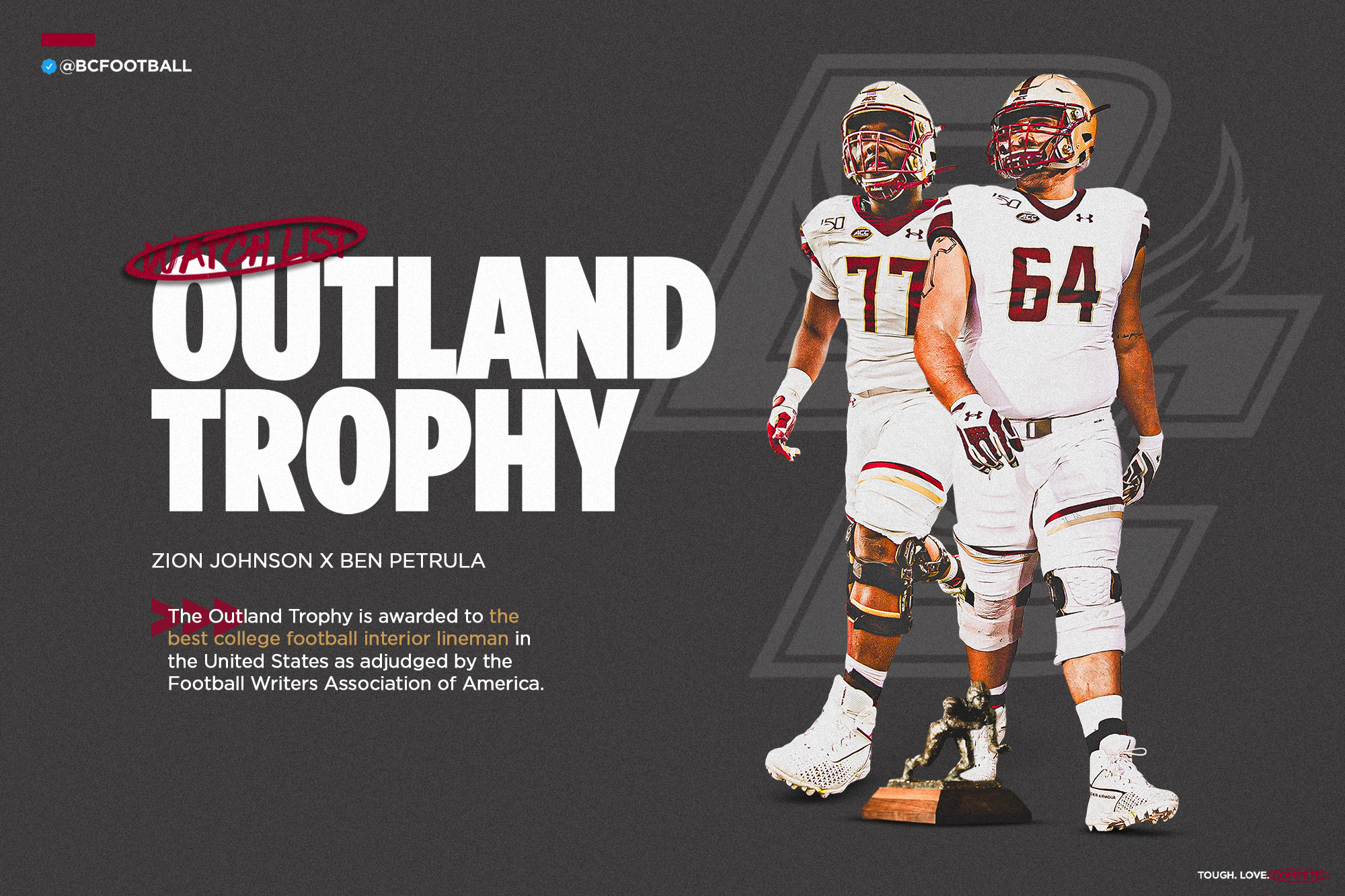 CHESTNUT HILL, Mass. –  The Football Writers Association of America has announced the preseason watch list for the 2020 Outland Trophy, recognizing 85 standout interior linemen representing all 10 Division I FBS conferences and independents. This is the 75th anniversary season for the Outland Trophy and the watch list presents a diverse field of players to accompany the return of 2019 Outland Trophy winner, offensive tackle Penei Sewell of Oregon.

BC was one of 17 schools nationally to have two players on the watch list as Zion Johnson and Ben Petrula were named to the list.

Johnson, who was named a preseason All-American by Phil Steele, is coming off a dominant season in 2019 for the Eagles. The All-ACC selection quickly blossomed into one of the ACC’s best offensive linemen in 2019 after transferring from Davidson.

Johnson started seven games but played 90% of the snaps at left guard. A three-time ACC Offensive Lineman of the Week selection in 2019, Johnson was a key member of a BC offensive line that was among the national leaders in sacks allowed and rushing yards.

He started all 13 games at right tackle and allowed just one sack the entire season.

The New Jersey native was one of the highest-rated run blockers at tackle in the ACC according to Pro Football Focus.

The recipient of the 75th Outland Trophy will be announced in early December. The official presentation to the winner will be made in Omaha, Neb., at the Outland Trophy Awards Dinner sponsored by Werner Enterprises and produced by the Greater Omaha Sports Committee, scheduled for Jan. 13, 2021.

Watch list candidates may be added or removed during the season. The distribution of watch list candidates is spread well among the conferences – behind the 14 from the SEC and 12 from the Big Ten are the Pac-12 with 11 and the Atlantic Coast (9), followed by the Mountain West (7), Big 12 (6), the Independents (6), and the American Athletic, Conference USA, Mid-American and Sun Belt with five each. The list includes 32 offensive tackles, 21 offensive guards, 17 defensive tackles, and 15 centers.