Denver Broncos: DL Shelby Harris is the Centerpiece on Defense 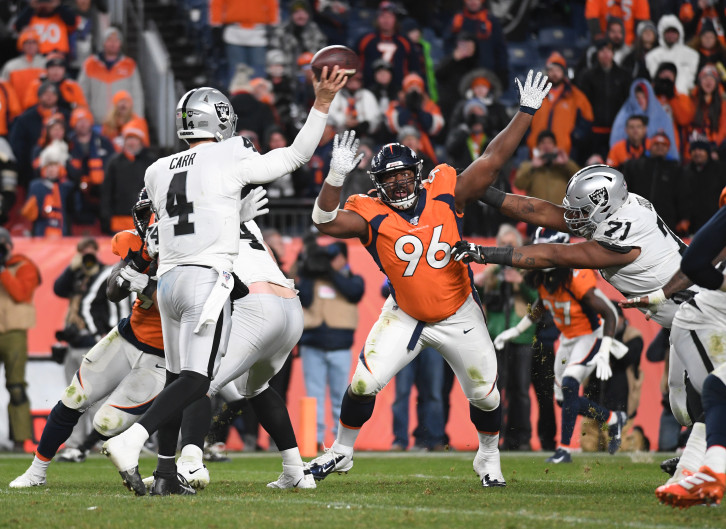 Adding some extra beef to their defensive line, the Denver Broncos have vastly improved their front in both size and unending talent. In a struggle to supply our great country with enough meat, and falling short at the moment due to COVID-19, the Broncos are certainly not hungry for beef. They’ve added plenty of it to their revamped D-Line. Nose tackle/ defensive end Shelby Harris re-signed a one-year, $3.25 million contract in order to stay in the Mile High City, DE Jurrell Casey was acquired from the Tennessee Titans via trade, and former Dallas Cowboys’ lineman Christian Covington signed the dotted line as well.

I’ll delve into what Casey and Covington bring to the Denver ‘D’ next week. Today, my focus is on Mr. Harris. The centerpiece.

This athletically gifted 28-year-old nose guard/ DE from Illinois State is playing for his fourth NFL franchise. Luckily for Denver, they’ve owned the rights to Harris dating back to 2017. As mentioned above, they wisely re-signed him during the offseason. A behemoth at 6-foot-2 and 290-pounds, I assure you that his listed weight is three bills or more. He’s a big boy. Anchoring the middle of the Broncos’ defensive front, Mr. Harris is mindbogglingly explosive at the snap of the pigskin. Superhuman strength, speed, instinct, balance, and brilliant technique make Shelby a game-wrecking presence. Harris didn’t produce outrageous numbers in his 2019 campaign; however, many of the plays he made were timely.

Coming up with a quarterback sack at a key time, or pinning a running back down behind the line of scrimmage, Harris was clutch. Although he’s a natural at NT, Harris played his best football while lined up at DE. Compiling 49 tackles (28 solo), six sacks, and one forced fumble last season, Shelby has accumulated 136 total tackles, 14.0 sacks, one forced fumble, and even one interception during his NFL career. Starting all 16 games a season ago, Harris recorded a league-high for DL with nine pass deflections. Playing for a new contract in 2021-22, look for relentless hunger from Mr. Harris during Denver’s upcoming 2020-21 regular-season. Let’s just hope normalcy due to the coronavirus pandemic comes sooner than later.

Here’s a YouTube video of Harris sealing a 16-15 Broncos’ victory over the Oakland Raiders in last season’s finale. Do your thing, Shelby.

Unfortunately, Harris happened to start his career in Raiders’ Silver and Black in 2014. Talk about getting sweet revenge in Broncos’ Orange and Blue against his former team. Okay. Does anyone else think it’s bizarre that they’re now the Las Vegas Raiders? Either way, we all can agree on one thing. Broncos Country will always hate Raider Nation.

Holding down the middle of Denver’s defensive front, Mr. Harris will allow superstars’ Von Miller and Bradley Chubb to have a field day off the edge. Until next week when I’ll highlight Mr. Casey and Mr. Covington, be smart, stay safe, and stay healthy.

One thought on “Denver Broncos: DL Shelby Harris is the Centerpiece on Defense”