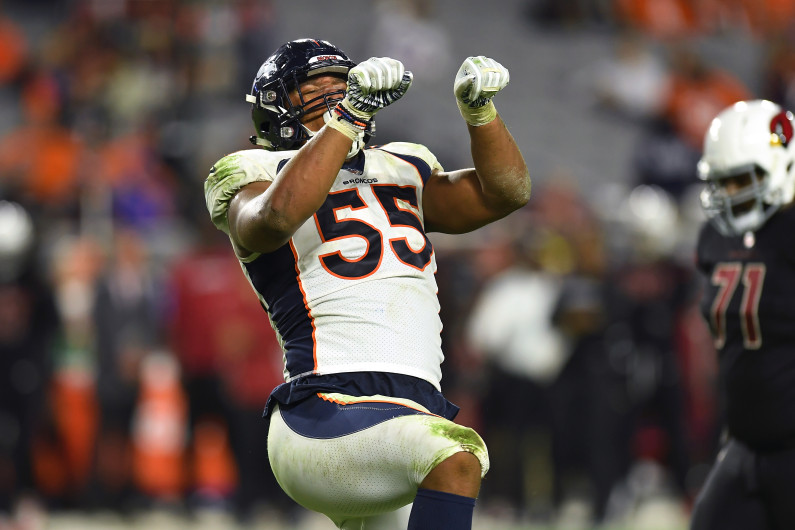 Sometimes you have to be lucky. The Denver Broncos found themselves in luck when outside linebacker Bradley Chubb fell into their proverbial laps as the No. 5-overall selection in the 2018 NFL Draft. Denver needed another edge pass rusher opposite perennial All-Pro Von Miller. Their wish was granted with Chubb. Now a 23-year-old who’ll turn 24 in June, Bradley is a defensive juggernaut. He’s a straight-up boss, my friends. Chubb is not just a frightening sight for left tackles and quarterbacks, his run-stopping ability has running backs shaking in their cleats as well.

Originally from Marietta, GA, Mr. Chubb played collegiate pigskin for the North Carolina State University Wolfpack. During his senior season in Raleigh, NC, Chubb registered 10 sacks along with 72 tackles. Almost a third of those tackles went for a loss. Goodness. Among his many accomplishments on the gridiron in his senior year, Bradley was named first-team All-Conference in the ACC, first-team All-America, and he took home some hardware as well. Yes, Chubb collected both the Ted Hendricks Award and Bronko Nagurski Trophy. These accolades had NFL Draft Scouts everywhere salivating over his pro potential.

Broncos Country was introduced to Chubb early and often in his 2018-19 rookie season. Looking studly in Broncos’ Orange and Blue, Bradley certainly didn’t disappoint the masses in the Mile High City. In just 20-games played in two seasons in the league, Mr. Chubb has accumulated 81 total tackles, 13 sacks, three forced fumbles, and one fumble recovery. If it wasn’t for a devastating partially torn left ACL (anterior cruciate ligament) a meager four-games into last season, you can only imagine what Bradley’s numbers would look like now.

Let’s not forget that Chubb played nearly the entire fourth quarter against the Jacksonville Jaguars with an ACL tear. Holy crap. That’s insane. Kudos to you for the exceptional fortitude, Mr. Chubb.

There’s absolutely zero doubt. Chubb is ready to go when the NFL’s 2020-21 season kicks off. Speed, strength, size, vision, toughness, and leverage along with superb technique. Mr. Chubb’s gifts on the defensive side of the football are plentiful. Don’t just take my word for it, this is what former Dallas Cowboys’ and Broncos’ great, DeMarcus Ware, had to say.

“The thing is the mentality of ‘I can’t be stopped,” Ware said via the team site. “And I know that Bradley Chubb, he has that mentality. No matter what type of injury you have, you can come back from it if you work hard enough, and I know he’s going to come back stronger. Just from talking to him, he’s working out really, really hard.”

Ware was a crucial component in Denver’s march toward their third Lombardi Trophy in 2015-16. As Super Bowl 50 Champions, the Broncos needed Ware’s superior play and leadership opposite Miller. Retiring a champion, Ware is currently ninth in NFL history with 138.5 sacks. Amazing.

Now, OLB Bradley Chubb will be filling the void that Ware left behind. He’ll be the anchor on the other side of Von Miller when the 2020-21 NFL season commences. Sorry, LTs, QBs, and RBs alike. This man’s freakishly scary. His impact on the Denver Broncos’ defense will be abundant.