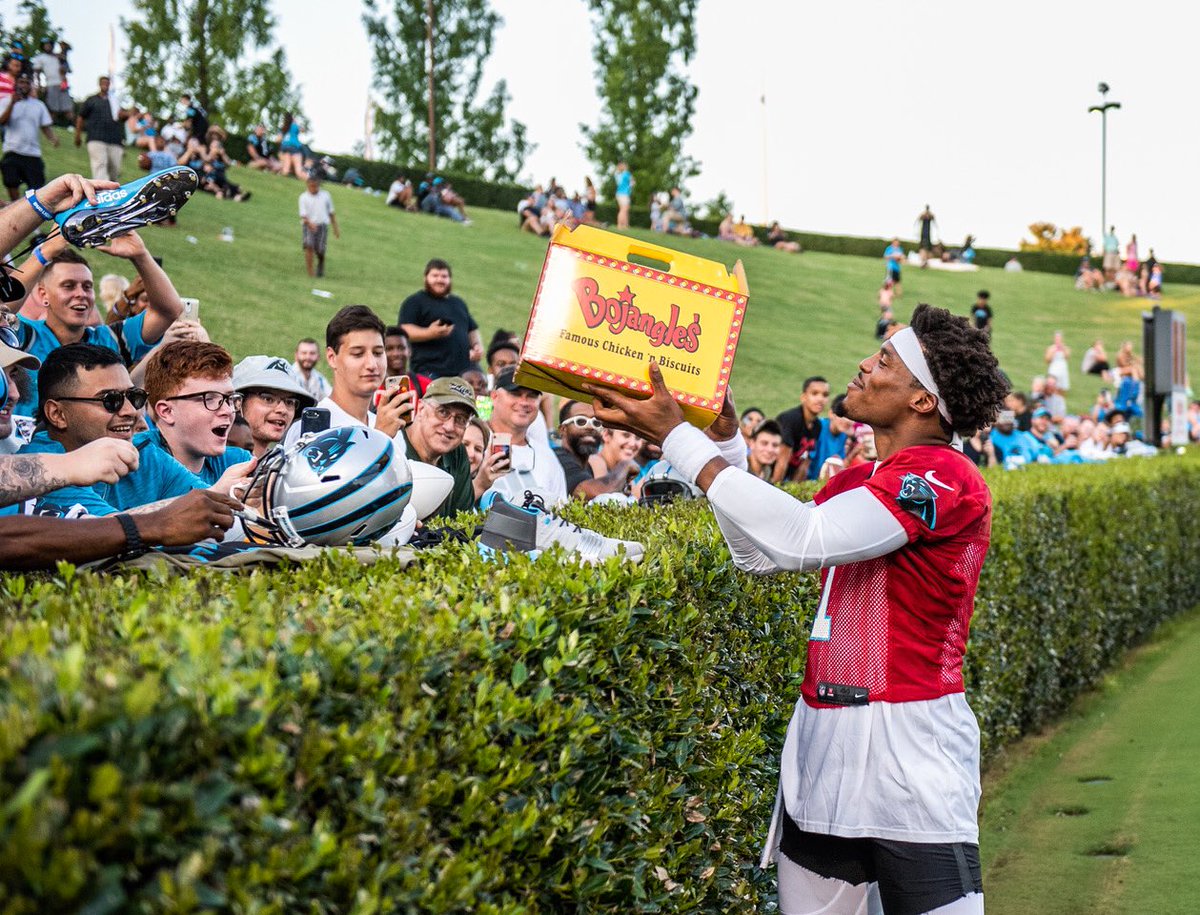 At Bojangles in North Carolina, Cam Newton and Sammy Sportface discuss how much money Newton should demand the Patriots pay him to be the quarterback. Stephen A. barges in.

“What the hell is going on? This must be Sportface? What a fabulously fat and oddly odd old man. You are going to be sorry you ever messed with the spectacularly special Stephen A. Now Cam, why are you hanging out with this has been lap doggedly lousy loser? You should be astronomically ashamed of yourself.”

Cam shoves Stephen A. away from the table.

“Get away from me and Sportface. We were having Bo Berry Biscuits scheming on how much money to force Kraft to pay me to join the Patriots. And you come barging in like I owe you something. Don’t owe you nothin’, Stephen A. And stop whining all the time and blabbering avalanches of redundantly redundant adjectives and adverbs.”

“So this is Sportface. Dumb Dumb, name. I came out with hundreds of nicknames for myself more than creative than that. When I went to Phoenix, I came up with Shaqtus.  With Boston, I called myself the Great Shamrock. And with the Magic, I was the Great Aristotle. That didn’t have anything to do with Orlando but Aristotle sounded like a cool name. Maybe that one should have been the Micky Shaq.”

Stephen A. shoves Cam and Shaq.

“You guys are killing me. I am having a very terrible and tumultuous day. You guys are not paying attention to me, the one and only Stephen A. You’re fascinated with this fraudulently fraudulent, spectacularly spineless Sammy Sportface.”

“I didn’t say I was fascinated with him,” said Shaq. “I just told him his nickname stinks. His blogs are pretty interesting though. Did you read that one about Ricky Williams smoking weed with Roger Goodell, Bill Belichick, and Robert Kraft? Man, everybody’s sharing that one on the Internet.”

“PU – LEASE stop this nonsensical nonsense right now. I tell you right now, plain and simple, that didn’t happen. Sportface made that whole thing up. I have never been angrier. I don’t want to speak with anyone today or any day. This is so incredibly incredulous.”

“Sportface is keeping us informed of what’s going on in sports,” said Shaq. “He’s filling that void in our lives. You have been arguing every day on First Take with Max Kellerman about where Brady is going and where Cam will go. That’s all talk. But Sportface is telling us in real-time what’s really going down.

“He told us Bledsoe got an offer from the Bucs for $27,113. What precision in his reporting, down to the specific dollars, no rough estimates. He reported Cam is going to the Patriots. You had him going to the Chargers. Given his track record, I gotta believe Sportface. Why else would Cam be here at Bojangles with Sportface if Sportface didn’t have the goods?”

“Oh my goodly goodness God,” said Stephen A. “The sports world has gone wildly wild. I can’t take it anymore. I simply, plain and simple, have no patience for this whatsoever never.”

Stephen A. stormed out of Bojangles. He got on his phone and called Kellerman.

“You’re fired,” he said. “Sportface is taking your position on ‘First Take.’ I need to show indisputably and personally and professionally that I’m the one and only officially and outstandingly when it comes to sports. I need Sportface to be splattered to smithereens spectacularly. I want Sportface. You go back to babbling and blustering about boxing. I need to slam the door shut on Sportface supersonically and superlatively.”

“He’s the guy posting all that credulously incredulous crap about air balloons and wine festivals and Brady’s beach party with Eric Von Zipper.”

“Read that. Sounded like a trip. Wish I was on whatever Sportface is on.”

“Move out monetarily and momentously right now. Clean out our cluttered and calamitous office.”

“You’re not in charge of firing me.”

“Damn straight I am. I run everything enormously at ESPN.”

Shaq, Cam, and Sportface order another round of Bo-Berry Biscuits.

“So which of my nicknames do you think is the cleverest?”

“I like the Great Aristotle because it made no sense whatsoever,” said Sportface.

“But what about my contract with the Patriots?”

“I’ve got Kraft in my hip pocket,” said Sportface. “He smoked weed with Ricky Williams and I have that secret I can tell the world if he doesn’t meet your demands.”

“Steep, Sportface. I’ve already offered Antonio Brown $29 million to drop his air balloon and $29 million for Ricky Williams to give out weed to all Patriot fans.”

“Are you a sports reporter or a sports agent?”

“Neither. I’m the visionary leader, sort of like Tony Robbins, of the Baby Boomer Brotherhood. I galvanize, inspire and amuse men in the 55-to-75-year-old age group.”

“Sure. Google Sammy Sportface. The Baby Boomer Blog and join the Group.”

“Can we get on with my contract?” said Cam.

“Old news,” said Shaq. “Sportface reported that already. Get up to speed on your own football team’s news, Bob.”

“My memory is going,” he said. “Must be that wacky weed Ricky Williams turned us onto.”

Shaq, Cam, and Sportface order another round of Bo Berry Biscuits.

“Damn, Sportface, how many of these biscuits can you eat?” asked Cam.

“That’s a great question for the Great Aristotle.”

“The Great Aristotle was a nickname I pulled out of my rear end,” said Shaq. “Don’t take that to mean I have in-depth knowledge of obscure, highly specific, football contract numbers made up by a Tony Robbins Wanna-Bee, Baby Boomer Brotherhood Visionary.”