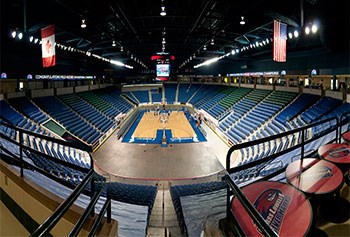 When the basketballs were rolled out for the first time back in the middle of October, there was reason to believe that the UMass Lowell basketball team was in good shape. They were backed by a schedule that featured 17 home games and hosting their first in-season tournament. The River Hawks were primed to have their best season since becoming a Division One program. It’s too bad the blueprint did not match what took place. A season-ending record of 13-19, an America East Conference record of 7-9, and another first-round exit in the playoffs have fans wondering. They are wondering what does this team need to do to climb into the upper half of the league and finish above .500 overall. It would appear that the River Hawks have reached that point where the direction and the method may need a bit of an overhaul this summer.

The River Hawks season began on the road at UMass-Amherst with the annual game vs the Minutemen. Once again it would be Amherst that would prevail. It would be the beginning of a three-game road trip to start the year. The season-opening trip produced a 1-2 record with the win coming in game two at L.I.U. Brooklyn behind a 51 point performance by Senior grad student Christian Lutete. The home opener was a victory over UMass Boston, a division three program that would square their record at 2-2. Then came the River Hawk Invitational. Usually, when these events are put together, the idea is to put a competitive event together, but one in which the host team will, in the end, come out on top. Someone forgot to tell the River Hawks this. Three games in three days vs Jacksonville, Merrimack, Dartmouth, and UMass Lowell found ways to lose all three. Two of the losses came in the last possession and the final game in OT to Dartmouth. Not the way to host your first tournament. It would lead to a 3-5 first month of the year, again not what they were hoping for.

December got off to a much better start as the team won three of their first four games. But just when you thought things were heading in the right direction, the team ended the month on a three-game losing streak. There was another problem the team was dealing with and that was unhappy players. Two would decide to enter the transfer portal and leave the program during the Christmas break. Depth on this team became a major problem that was never solved.

With a roster that was now shorthanded to be sure, head coach Pat Duquette had no choice by to try to get as much as he could from his starters as conference play got going in the new year. America East play got started at Maryland-Baltimore County where the River Hawks lost in overtime. They then lost their home opener in the league by twelve to Hartford. A team they ended up seeing a couple more times. After a home win over Binghamton, the team went through a four-game losing streak that put them in a hole. For the third straight month, UMass Lowell finished with an under .500 record at 2-5.

February became the month where the River Hawks finished with an above .500 record at 5-4. It included a couple of big wins on the road at Hartford and their season finale at New Hampshire. It allowed them to end conference play at 7-9, the same league record as a year before. And it sent them to the same place as a season before, Hartford, for their playoff matchup. The result was also the same, a loss in CT. A game that was tied at the half, got away from the River Hawks in the second half. And so did their season. Ending in the same place as a season before.

As the off-season begins for UMass Lowell, there are questions abound. Their head coach is first. Pat Duquette has done a good job in getting this program to the division one stage. But with one year left on his contract, is he the guy that can take this program further? Or is it time for a new voice to take over? The second issue is fan support. The River Hawks played in a six-thousand seat arena that they have major problems putting people in. This year, the team played before crowds of over two thousand twice. Too many times they played before less than a thousand people. A problem that A.D. Peter Casey vows to work on over the summer. With different package ideas and maybe better home scheduling that can draw fans to Tsongas Center to see this team play.

Whatever the case, it should be an event filled summer for this program. They graduate two members of the team that have contributed to the division one level they now enjoy. Lutete made history with an Academic-All American selection. First in school history. And Josh Gantz, who spend six-years here because of injuries he would play through. Both players leave as thousand point scorers. Their loss will have to be replaced by new members of the program. But there are returning players that do bear watching. Among them is first-time freshman league selection Connor Withers and incoming senior Obadiah Noel another member of the thousand point club to build around.

Will that be enough? That remains to be seen.