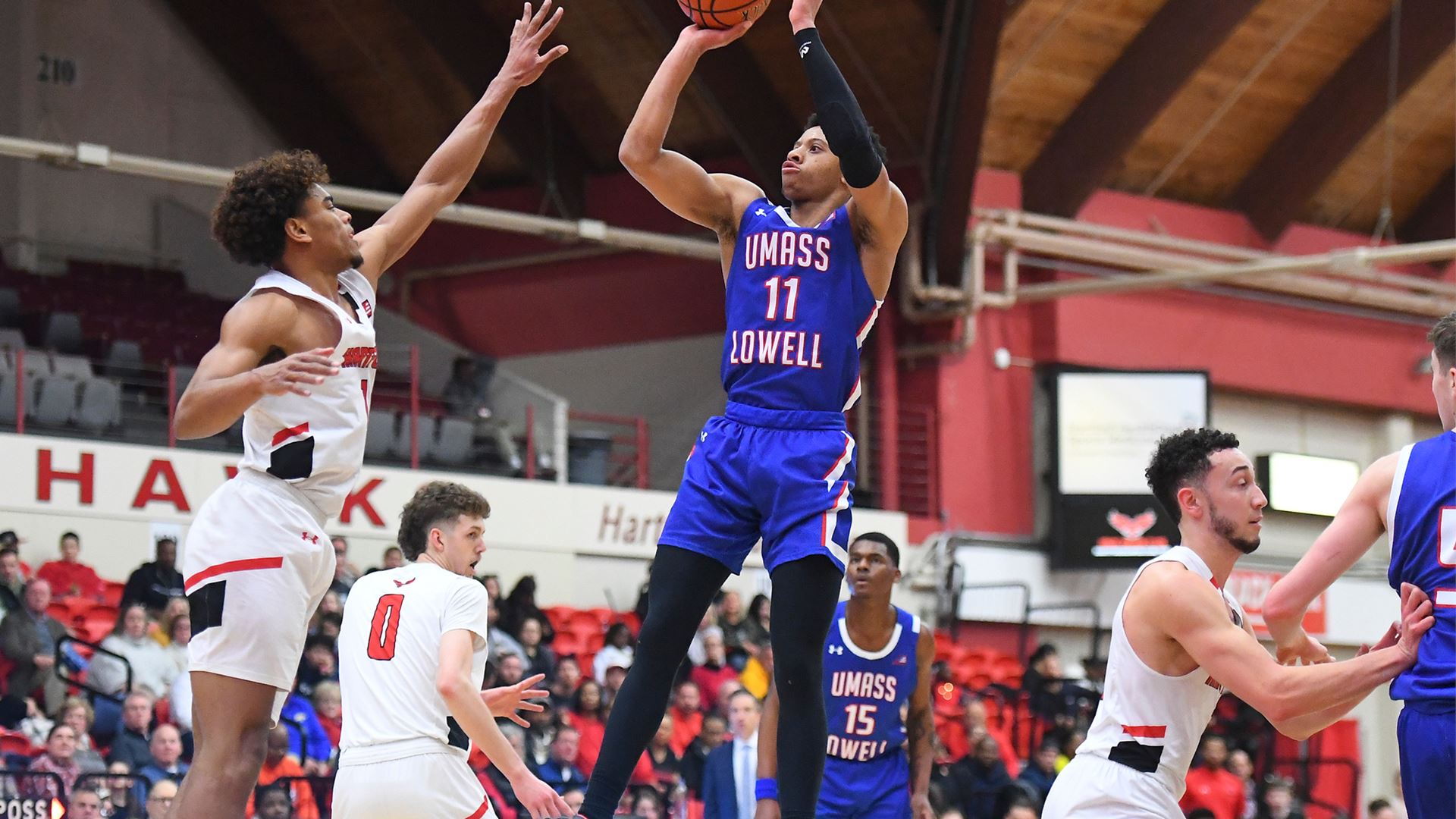 For the second straight year the UMass Lowell River Hawks, as the #6 seed, made the trip to West Hartford, CT. They took on #3 seeded Hartford Hawks in the quarterfinal of the America East Playoff on Saturday. One year ago, the Hawks advanced to the semifinals of the playoffs with a 78-70 win over Lowell. How would this year’s contest play out? UMass Lowell was seeking their first-ever post-season win in their third appearance. They came into this game winners of four of there last six games to finish with the same conference record as a season ago (7-9). For Hartford (9-7), it’s the third-straight year they have been a top-four seed in this event. Overall, in home court tournament play, the Hawks are now 7-4.

For the River Hawks to advance, their offense would have to perform at a high level. They led the league in scoring averaging at 74.6 a game. On the other side, Hartford’s defense would need to be a key. They gave up 66.8 points per game which had them in the middle of the pack in the conference. The game had a playoff feel to it with each team trying to work out the nerves in the early going. At the first media timeout, the game was tied at 6-6. Coming out of break, the first real run of the game took place. Hartford went on a 7-0 run to take a 13-6 lead. They would keep that seven-point advantage into the second media timeout of the half at the eleven-minute mark.

The Hawks were getting it done on the blocks scoring ten of their eighteen points from there. The River Hawks started using the three-ball to get back into the game. Obadiah Noel (23 points, 8-of-10 from the line) and Ron Mitchell keyed an 8-0 run by the River Hawks to get them back to within five at 25-20 with 7:48 left. Off the Hawks bench, PJ Henry gave his team five quick points on a jumper and a three-point play to give the Hawks a four-point lead at 31-27. Lowell battled back and would tie the game on two Christian Lutete (23 points, six rebounds) free throws to make it 33-33 with 2:02 left. They took the lead on a three from Kalil Thomas and it was 36-33 with 1:25 to go. Hartford quickly tied the game on a three by Romain Boxus for a 36-36 tie with a minute to play. The first half would end as at 38-38. Both teams shot the same percentage from the field at 50% (12-24) and were good from the foul line. Lowell shot 76% ( 10-for-13) while Hartford was a perfect 10-for-10.

The second half did not start well for the River Hawks. Malik Ellison, who spent most of the first half in foul trouble, went off. The first time down the court he was set up for a dunk. He would score twelve of his team’s first seventeen points. It was 55-47 with 14:34 to go. Twenty of his game-high 26 came in the second half. He was getting help from some of his friends like senior guard Traci Carter (14 points, six assists, six rebounds) and sophomore forward Hunter Marks (17 points, five rebounds, three assists, and 7-for-8 from the foul line). They provided a three-headed monster in the second half that the River Hawks could not handle. The Hawks led this game for almost 34 minutes, but it was those first five and a half minutes of the second half that spelled doom for the River Hawks and allowed Hartford to advance. Being short-handed and having three members of your starting five in foul trouble did not help UMass Lowell’s cause. The Hawks would ride that early surge to a victory and a spot in the semifinals of the America East playoffs for the third straight year, 89-75.

After the game, winning coach John Gallagher said “we are peaking at the right time” and credited the River Hawks for “quite a battle.” His two stars on Saturday, Ellison, and Carter both talked about how “coming to Hartford was the best decision of their lives” and looked forward to what’s ahead which is a game on Tuesday night. Credit was also handed out by River Hawk head coach Pat Duquette who admitted: “Hartford was real good tonight.” Despite the loss on Saturday, he believes the program is headed in the right direction. Depth is a problem that will have to be addressed in the summer, but overall, he likes where they are headed. Connor Withers had 10 points and eight rebounds for Lowell.