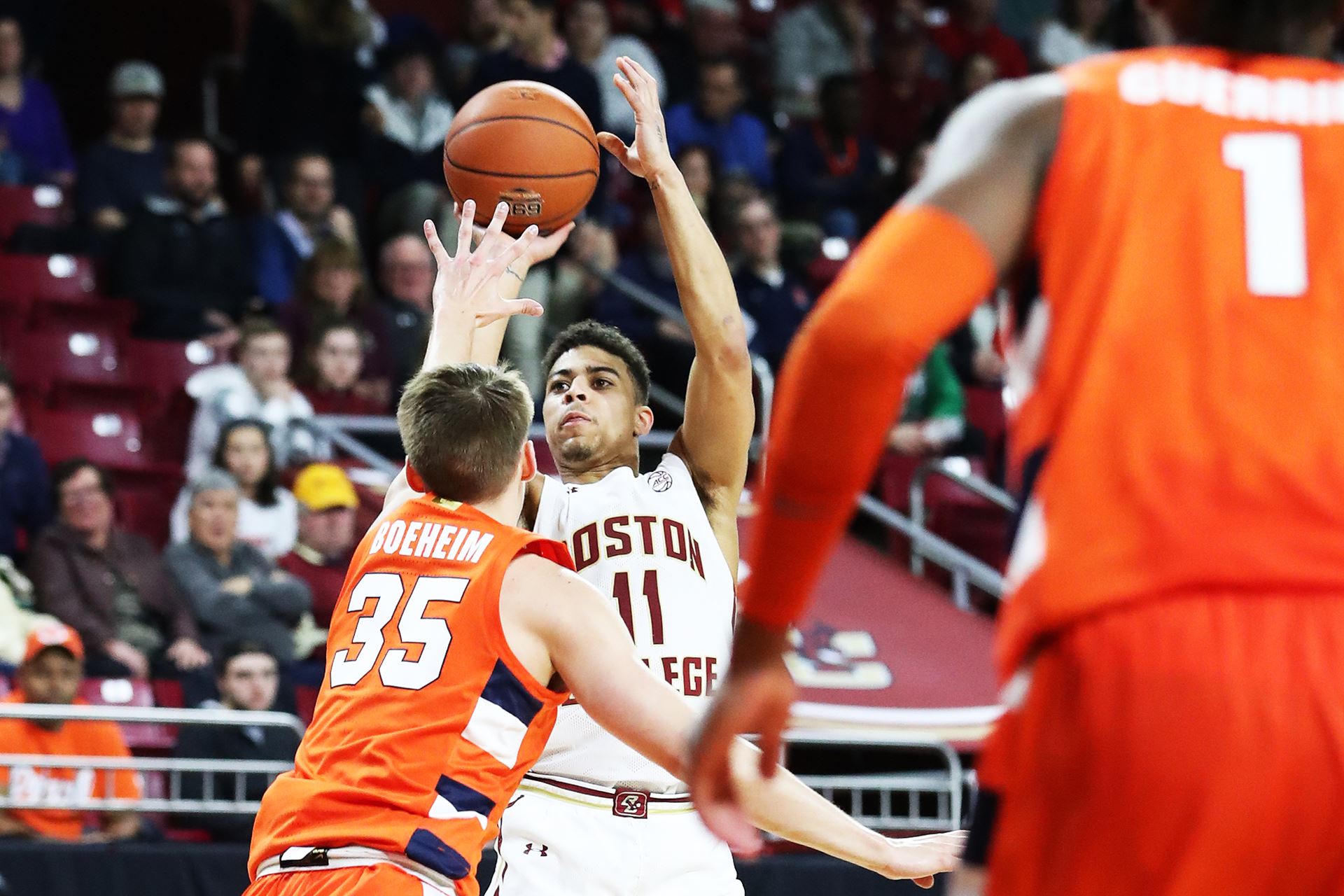 With three starters missing due to injury, the task for the Boston College Eagles (13-17, 7-12) would be even more difficult at home Tuesday night vs Syracuse (17-13,10-9). Coach Christian was forced to use his 11th different starting lineup of the season. Their assignment was to keep Syracuse scorers from getting going in the game. That did not work out so well for the Eagles. Elijah Hughes was, as his coach Jim Boeheim said afterward, “hard to guard.” Eagles players like Kamari Williams, making his first collegiate start, and Julian Rishwain would probably agree with that statement. Hughes (28 points) was just too physical for either player to handle. When it was not Hughes, Buddy Boeheim (21 points) was knocking down shots as well. These two would be the only Syracuse players to finish the game in double figures, and on Tuesday night they would be enough. Syracuse gets its sixth win on the road this season, 84-71 over Boston College.

This game featured some strange stats. The Orangemen would finish the game with more turnovers (10) than assists (9). There were outstanding from the free-throw line hitting 21-of-25, 84%. They came into this game shooting at 71% from the line. In the second half, Syracuse controlled the boards on both ends getting 10 offensive which led to 15 second-chance points. Those rebounds also led to 20 points in the paint for the Orange. BC head coach Jim Christian thought his team got tired in the second half. Players that normally do not play a lot or minutes were forced to and in the second half, it showed. For Boston College, these numbers were just as weird. They had 23 assists on 25 made baskets that would lead you to believe they did a good job of sharing the ball. Afterward, Christian said, “the offense played well.” The defensive breakdowns in the second half were the main reason this game got away from them. Because they were facing a 2-3 zone all night, the Eagles hoisted 42 3-point shots, making 19 of them. It would account for more than half of their offensive output for the night. The Eagles could not get the ball inside and do any sort of damage against the zone. Syracuse made them a jump-shooting team and it worked.

BC did get double-figure scoring night from the starting guard duo of Jay Heath (17 points) and Derryck Thornton (18 points). However, most of their work came in the second half when the game was getting away from them. Heath had 11 in the second twenty minutes, Thornton had 15. Rishwain gave the Eagles 12 off the bench. The trio combined to take 33 three-point shots for the game, making 15 of them. On this night, long-range shooting would not be the way to victory.

In the first half, the Eagles had the lead only briefly. Williams hit back-to-back baskets, one a three the other a fast break dunk off of a Syracuse turnover, had the Eagles in the lead at 8-6 with 15:40 to go. A Rishwain three would give BC their last lead of the half at 14-13 with eleven minutes to play before halftime. Two Joesph Girard III free throws gave the lead back to the Orange at 15-14 with ten and a half to go and they never let go of it. At the half, Syracuse was up eight at 35-27.

Syracuse started the second half on a mini 5-0 run to push the lead to ten at 37-27. Boeheim had all five points on a three and a turnaround in the lane. Hughes would give Syracuse another five straight points on a driving dunk and a jumper from outside the paint. Syracuse now had a 13 point lead at 51-38 with 14:20 to go. The lead grew to 22 on Girard III fastbreak jumper to make it 70-48 with 6:26 to play. It would reach its watershed moment at 24 on a Quincy Guerrier layup 72-48 with 5:37 to go. All that was left the final score which was 84-71 Syracuse.

Hughes showed why he is the conference’s leading scorer hitting tough shots and wide-open ones. His coach thinks he is one of the better players in the league, and it’s hard to argue after watching him carve the Eagles defense up with his offense. Buddy Boeheim is a nice plan B when Hughes is having trouble, and the duo, when on, can be difficult to stop at best. For the Eagles, it is about getting healthy which they hope to do before the Atlantic Coast Conference playoffs begin before that one last regular-season game, on the road at Florida State on Saturday.