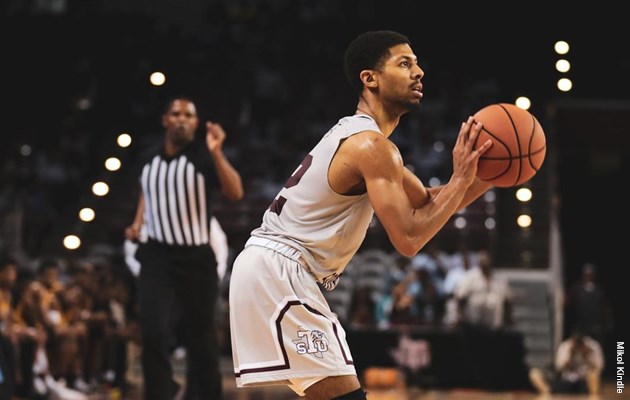 ITTA BENA, Miss. – Texas Southern battled back from a double-digit deficit in the second half and made plays when needed as the Tigers picked up an important road win over Mississippi Valley State Saturday evening.

Down by one early in the first half, the Tigers outscored MVSU 17-5 for a double-digit lead as they led 31-20 with 7:44 remaining. However, the good times came to an end quickly as Mississippi Valley State responded with an 18-5 run over the next four minutes to reclaim a 38-36 lead after Caleb Hunter’s layup. TSU shot 1-of-5 during that span while Mississippi Valley State went 5-of-6 to get back into the game.

TSU started off the second half with back-to-back turnovers which led directly to a pair of Delta Devil three-pointers and a 48-40 deficit in the first minute. TSU would miss a layup and the margin for MVSU became larger as Hunter nailed a trey for a 51-40 lead. Eden Ewing answered with a layup but another turnover led to a MVSU dunk and an 11-point deficit once again with 18:14 remaining.

For the second time in three games, the Tigers were faced with adversity as they trailed by double digits in the second half and had to make a big move quickly in order to keep the game from getting out of hand.

Bryson Etienne answered the call with a three-pointer and ignited a 9-0 run as they forced two turnovers to get within 53-51 after Eden Ewing’s layup at the 15:41 mark. Valley’s Michael Green moved them back to four but the Tigers answered at the free-throw line with another pair from Ewing for a 55-52 deficit. The momentum began to wane after the surge as TSU committed four turnovers over the next four minutes as MVSU outscored TSU 10-3 to up its lead to 65-56.

Once again, TSU was forced to respond in a big way as Justin Hopkins scored four points along with a pair of huge three-pointers from John Jones to spark a much-needed run. Chris Baldwin added a pair of free throws to cap off a 12-2 surge which saw TSU lead 68-67 with 9:21 remaining.

The lead would change hands five times over the next two minutes as MVSU went back ahead 76-72 at the 7:21 mark. TSU charged back again and responded with a 12-0 run as Jones and Tyrik Armstrong combined for 10 points to help TSU lead 84-76 as the clock read 4:35.

From there, the Tigers would hold to the lead like their life depended on it but MVSU kept chiseling away as they closed to within one on three occasions in the final minutes. MVSU’s Torico Simmons hit a pair of free throws to draw within 93-92 with 30 seconds and Armstrong refused to part with the ball on the next possession as MVSU was forced to foul with 9.2 seconds left. Armstrong missed the first but made the second free throw for a 94-92 lead.

Hunter would bring the ball down on the final possession and found Quinton Alston for an attempt at a game-winning three-pointer. Alston’s three-pointer was short at the buzzer as TSU closed out the contest.

Hopkins led TSU with 24 points and 10 rebounds while Jones finished 6-for-6 from the three-point line for 19 points. Armstrong added 16 points followed by 10 from Ewing.

TSU is back in action Monday night in Pine Bluff, Ark. for a 7:30 p.m. tip against Arkansas-Pine Bluff.