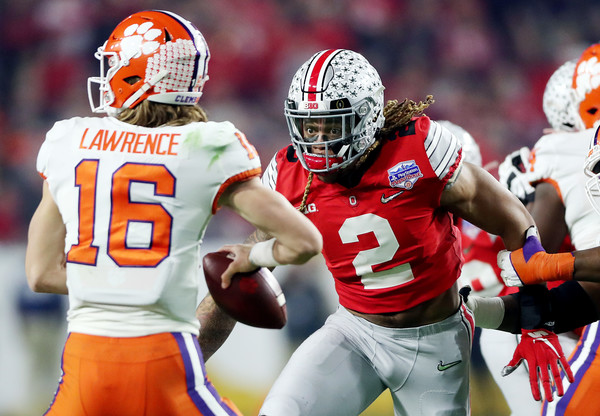 The 2020 NFL Draft will feature many great offensive prospects. However, there are several top-notch defensive players that teams should select in the top ten. The best defensive prospect is Chase Young, defensive end, out of Ohio State.
No defensive player is getting the level of attention that Young is receiving. The reason is simple, there aren’t any glaring weaknesses at all. After reviewing game film, it’s obvious there are several key skills that Young possesses. He uses his hands properly to achieve a perfect finesse block shed move. He does it so quickly and this gives quarterbacks a limited time window to escape the pocket. It seems like quarterbacks have only two seconds to make a decision when Young is closing in. He has great closing speed much those great Ohio State defensive ends who were top three picks Joey Bosa (2016) and Nick Bosa (2019). Young is also an excellent run stopper. His vision and secure tackling technique make it virtually impossible for running backs to get away from him. His football IQ, discipline, vision, instincts, and techniques will make him a vital part of any NFL defense.
When we think of legendary pass rushers regardless of position, we think of Lawrence Taylor, Mean Joe Green, Reggie White, and Terrell Suggs. The team that drafts Young may have that kind of presence on their defense.
Young really should be the number one pick in the 2020 NFL Draft without any debate. The issue is the Cincinnati Bengals have a need to start another quarterback. However, the Bengals would be better off passing on Joe Burrow and selecting the ultimate quarterback intimidator Young. Having that kind of pass defense presence is vital especially since the Bengals defense has to stop Lamar Jackson twice a season. Selecting the defensive end that broke Ohio State’s record for most sacks in a season with 16.5 should be a no-brainer.
The only thing Chase Young really needs to improve on in not giving up big plays when running backs and receivers get past him.