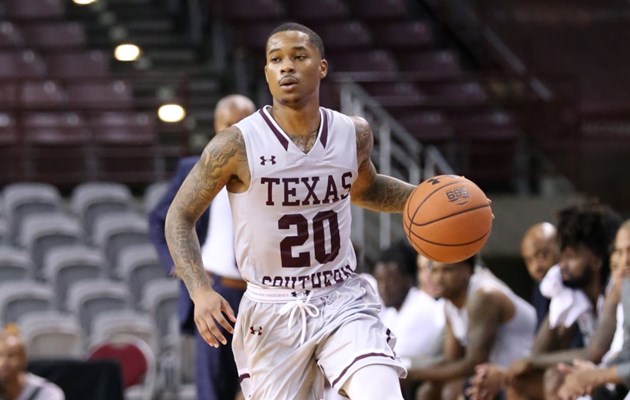 HUNTSVILLE, Ala. – Justin Hopkins didn’t disappoint the hometown crowd as he and Tyrik Armstrong rose to the occasion with the game on the line and sparked a 14-5 run over the final 5:16 as TSU claimed an 82-73 road win at Alabama A&M Saturday night.

Ahead 44-41 at the half, TSU would shake the Bulldogs’ grip early in the second half as they would outscore AAMU 20-8 over the first 12 minutes for a 66-54 advantage. However, the lead would slowly evaporate like water on a hot summer day over the next four minutes as AAMU’s Garrett Hicks led a 14-2 run with eight points to knot the game at 68-all. During the run, TSU was only 1-of-5 from the field with a pair of turnovers while AAMU took full advantage from the free-throw line as they were 6-of-6.

Hopkins, a former high school standout in Huntsville, stopped the bleeding with a free throw at the 4:26 mark for a 69-68 lead. He missed the second attempt but Yahuza Rasas was in the right place at the right time and scored off a putback for a 71-68 advantage. AAMU would answer the score off an offensive rebound but Hopkins answered with a tip-in off a missed basket to move ahead 73-70.

AAMU’s Cameron Alford hit two free throws to draw within 73-72 with 2:13 remaining but Tyrik Armstrong made the play of the night as he fed Hopkins a pretty pass which led to a dunk and three-point (75-72) lead 22 seconds later. On the ensuing possession, Alford missed a layup and TSU was whistled for a foul as AAMU’s Evan Wiley attempted a putback dunk but came down with an injury. In order for Wiley to remain in the contest and shoot free throws, AAMU had to take a timeout as Wiley hit 1-of-2 to trail 75-73 at the 1:28 mark.

As a result of the missed basket on the second attempt, Wiley was forced to stay in the contest on an injured leg and Armstrong went to work. The senior from Houston dribbled the length of the court, passed it off to Rasas at the top of the key and took a pass back from Rasas. The AAMU defender was sucked into the teeth of the TSU offense and Armstrong hit a wide-open three-pointer which turned out to be the dagger as TSU led 78-73 with 1:15 left.

AAMU attempted a layup on the next possession but Rasas blocked the shot and Armstrong rebounded the ball and made two free throws after being fouled. AAMU misfired on a three-pointer several seconds later and Armstrong hit two more free throws to seal the win as TSU won its 13th straight over AAMU and 24 of the past 25 contests.

The first half was nip-and-tuck as AAMU would break away to lead by as much as six early on but John Jones was the star of the half with 11 points and three, three-pointers. Both teams claimed leads through the half but TSU would begin to create separation late after baskets from Bryson Etienne and Eden Ewing game them a five-point lead with 1:50 remaining. AAMU would close to 44-41 at the close of the half.

Four Tigers scored in double figures led by Ewing’s 18 points. Hopkins added 17 followed by 15 from Armstrong and 14 from Jones. Rasas led TSU with 11 rebounds while Ewing had nine along with five assists from Armstrong.

TSU closes out the Alabama swing Monday night with another critical matchup at Alabama State beginning at 7:30 p.m. in Montgomery, Ala.