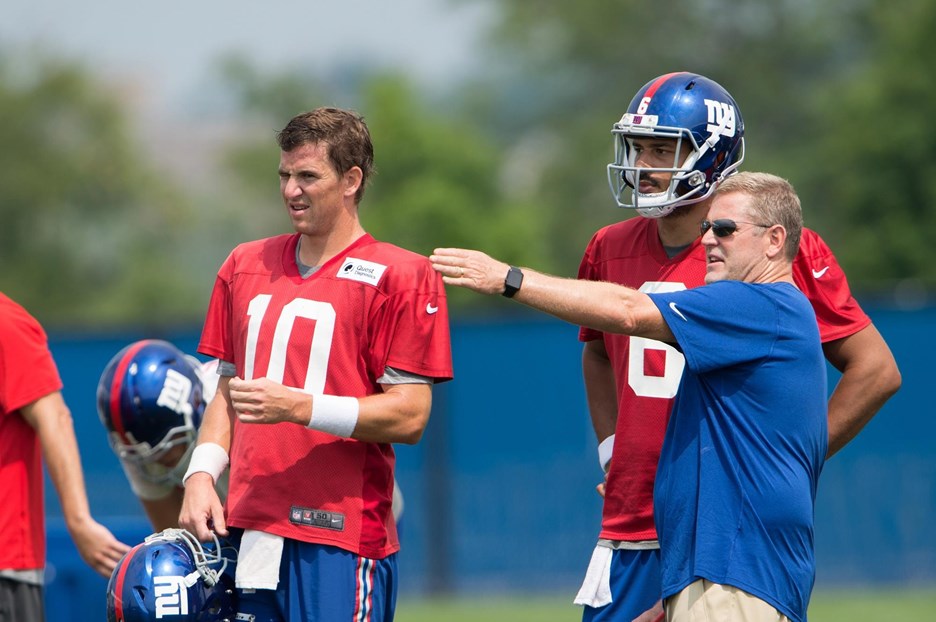 CHESTNUT HILL, Mass. – Boston College head football coach Jeff Hafley announced on Monday the hiring of Frank Cignetti Jr. as offensive coordinator and quarterbacks coach. Cignetti has tutored Aaron Rodgers, Eli Manning, and Sam Bradford during his 11 years in the NFL in addition to coordinating offenses on the collegiate level at Power Five institutions such as North Carolina, California, Pitt and Rutgers.

“We are thrilled to welcome Frank, his wife Ellen along with their children Frankie, Alyssa, Gabrielle and Ella to our Boston College football family,” said Hafley. “Frank brings tremendous experience as a coordinator both in the National Football League and in college football, coaching the likes of Aaron Rodgers, Eli Manning, and Sam Bradford. He brings a ton of energy and is one of the smartest football coaches I know and one of the best quarterbacks coaches I have been around.”

Cignetti comes to the Heights after spending his last seven years coaching in the NFL. A native of Pittsburgh, Pa., Cignetti spent the 2018 season coaching the quarterbacks with the Green Bay Packers. During his one season with the Packers, Rodgers threw for the second-highest single-season yards of his career as he threw for 4,442 yards and 25 touchdowns. Rodgers’ two interceptions under Cignetti’s tutelage were the lowest during a season in his career as a starter.

Cignetti came to Green Bay after spending two seasons in the same role with the New York Giants in 2016-17. Prior to his time there, he was with the St. Louis Rams for four seasons (2012-15), serving as the quarterbacks coach for the first three years and then as offensive coordinator for his final season. Cignetti also has NFL experience with the San Francisco 49ers (2007), New Orleans Saints (2000- 01) and Kansas City Chiefs (1999), along with 19 years of experience coaching at the college level.

During his two seasons with the Giants, Cignetti tutored QB Eli Manning, helping him register the second-highest completion percentage of his career (63.0) in 2016. Manning completed 377 of 598 passes for 4,017 yards, 26 TDs, and 16 INTs for an 86.0 passer rating that season as the Giants finished with an 11-5 record, a six-game improvement from 2015. He was one of only six QBs in the league in ’16 to register 4,000-plus passing yards, 25-plus passing TDs and a completion percentage of 63.0 or greater.

Prior to joining the Giants, Cignetti spent the previous four seasons (2012-15) with the St. Louis Rams, working with the quarterbacks for his first three seasons before serving as the team’s offensive coordinator in his final season. In 2015, Cignetti helped the Rams rank No. 7 in the NFL in rushing (122.3 ypg), No. 6 in yards per carry (4.56) and tied for No. 6 in rushing TDs (16). Rookie RB Todd Gurley ranked No. 3 in the league with 1,106 rushing yards and was tied for No. 2 with 10 rushing TDs. Cignetti guided the offense to a No. 1 ranking in the league in sacks allowed with 18, the fewest ever given up by the Rams in a 16-game season. In 2014 as quarterbacks coach, Cignetti integrated QBs Austin Davis (eight starts) and Shaun Hill (eight starts) into starting roles after QB Sam Bradford sustained a season-ending knee injury in a preseason game. Davis and Hill combined for 3,658 passing yards and 20 TDs with a 63.4 completion percentage, helping the Rams post the seventh-highest single-season percentage (63.5) in franchise history.

In 2013, Bradford was enjoying the best season of his career to that point before a knee injury ended it after just seven games. He was tied for No. 5 in the league with 14 TD passes and ranked No. 9 in completions (159), with a 90.9 passer rating that was his highest through seven games to that point in his career.

Under Cignetti’s direction, QB Kellen Clemens started the final nine games of the season and set career highs in passing yards, TD passes, and completions. In Cignetti’s first season as quarterbacks coach with the Rams, Bradford threw a career-best 21 TD passes and posted 3,702 passing yards, a career-high at that point.

Cignetti spent the 2011 season as the offensive coordinator at Rutgers working on the same coaching staff with Hafley, helping the Scarlet Knights rank No. 4 in the Big East in scoring (26.4 ppg) and No. 3 in passing offense (241.2 ypg) as they finished with a 9-4 record. Wide receiver Mohamed Sanu set a Big East single-season reception record and ranked No. 4 in the country with 115 catches for 1,206 yards (10.5 avg.) and seven touchdowns.

From 2009-10, Cignetti served as the offensive coordinator and quarterbacks coach at Pitt, again on the same coaching staff with Hafley. In his first season as the Panthers’ play-caller, the team scored 417 points, the highest point total by Pitt in a season since 1977 (428). Running back Dion Lewis ranked No. 3 in the country with 1,799 rushing yards, the second-most in a season in school history behind only Tony Dorsett’s 2,150 yards in 1976, while wide receiver Jon Baldwin registered 1,111 receiving yards, the sixth-best single-season total in school annals at the time. In addition, Bill Stull threw for 2,633 yards and 21 TDs with just eight INTs as the Panthers finished with a 10-3 record.

In 2008, Cignetti was the offensive coordinator and quarterbacks coach at the University of California, where he helped the Bears average 32.6 points per game and finish 9-4, including a victory over Miami (Fla.) in the Emerald Bowl. Jahvid Best rushed for 1,580 yards and 15 TDs on just 194 carries, an 8.1 average that ranked No. 2 in the nation, while Shane Vereen added 715 yards and four TDs on 142 carries (5.0 avg.).

From 2000-01, Cignetti coached the QBs for the New Orleans Saints. In his first season, Cignetti tutored veteran QB Jeff Blake, who posted the best passer rating of his career (82.7), and second-year QB Aaron Brooks, who was seeing his first career action. Brooks started the final five regular-season games in 2000, posting an 85.7 passer rating in those contests, along with a Wild Card victory over the Rams that saw him throw for 266 yards and four TDs for a 111.5 passer rating. In 2001, Brooks threw 26 TD passes, which was tied for No. 5 in the league.

Cignetti entered the NFL coaching ranks in 1999 as a quality control assistant with the Kansas City Chiefs. From 1990-98, Cignetti was on his father’s staff at Indiana University of Pennsylvania, his alma mater. He coached wide receivers (1990-92), secondary (1993-94) and quarterbacks (1995-96) before serving as offensive coordinator/ quarterbacks for his final two seasons. During his tenure, IUP advanced to the NCAA Division II national title game two times and earned a berth in the semifinals four times.

Cignetti began his coaching career as a graduate assistant under head coach Mike Gottfried at the University of Pittsburgh in 1989. At IUP, Cignetti was an all-conference safety before earning his bachelor’s degree in 1988.

His father, Frank Sr., was a Pitt assistant from 1966-68 and later the head coach at West Virginia (1976-79) and IUP (1986-2005). Frank Sr., who is the winningest coach in IUP history with 182 victories, was elected to the College Football Hall of Fame in 2013. Cignetti’s older brother, Curt, is currently the head coach at James Madison University.

Born Oct. 4, 1965, in Pittsburgh, Pa., Cignetti attended Indiana Area High School in Indiana, Pa. He and his wife, Ellen, have a son, Frankie, and three daughters, Alyssa, Gabrielle and Ella.