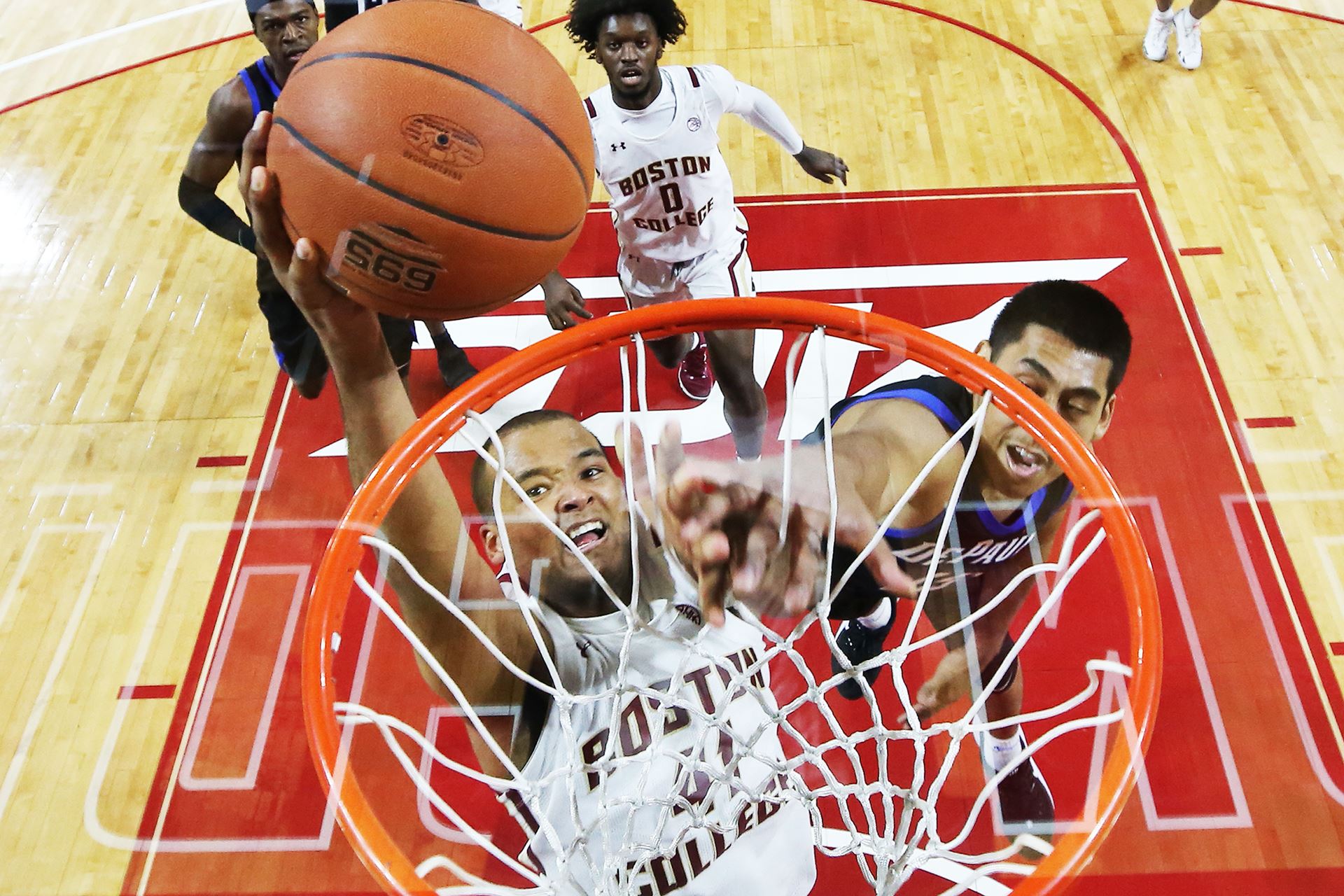 Boston College head coach Jim Christian did not mince any words after the game when he said: “We were awful on the backboard.” He was also correct when he pointed out how his team committed too many turnovers. To him, that was the difference in the game and it would be hard to argue with him. The Eagles (4-2) gave up 16 offense rebounds, 47 total, which led to 18 second-chance points. The Blue Demons (6-0) were clutch and scored 32 points in the paint and the turnovers that BC made led to 17 DePaul points. Not the way to get a victory at home and Boston College did not losing 72-67 to the Blue Demons on Saturday afternoon.

They were led by the first career double-double by freshman Romeo Weems of 17 points and 10 rebounds, the fourth double-double of the season from freshman Paul Reed of 11 points and 10 boards, to go along with 24 points and eight assists from junior Charlie Moore. It’s easy to understand how the Blue Demons were able to win their second road game of the season against a quality team. Blue Demons head coach Dave Leitao said as much after the game talking about how his team “made plays down the stretch” and was very happy with the way they “pursued the basketball off the glass.” He thought his defense was good enough and the rotation of players that were used on Eagles guard Derryck Thornton, who despite the 16 points, also coughed the ball up eight times in the game, five of those in the first half.

If there was a bright spot for BC, it was the play of the bench from freshman Julian Rishwain who gave the Eagles 15 points and three rebounds with nine of those points coming in the second half. His back to back three’s in the first twenty minutes gave BC a 17-14 advantage with 11:32 to play. However, the lead was short-lived as a 6-0 run by the Blue Demons gave them the lead back at 20-17 with 9:42 to go. There would be five ties in the game, all in the first half, and eight lead changes. The last one was at 28-28 with 1:52 to play. DePaul would close out the first half, on a 5-0 run. Moore scored all five points on a three-ball and two free throws. He also tied the game for the final time in the half on a three as well. DePaul went to the locker room up 30-28.

In the second half, it looked for all the world like the Blue Demons were going to win this game going away. They built an 11-point lead at 45-34 on the strength of eight points from Moore and four from Jaylen Butz. Just when it looked like the game was getting away from Boston College, Rishwain was put into the game and he contributed. He got eight points on a couple of three’s and two free throws to cut the Blue Demon lead to eight at 49-41 with 13:00 to play. An and-1 from Steffon Mitchell and two more free throws from Rishwain kept the game within striking distance with ten minutes to play. Another three from Rishwain (4-of-7 from distance) cut the DePaul lead to six at 59-53 with 5:49 to go. A Nik Popovic layup brought BC even closer at 59-55 and had the crown back into the game. But down the stretch, Moore was the go-to player for the Blue Demons. He would score 10 of the final 12 points for his team, six of those came from long distance. The Eagles had no answer for him on the defensive end.

Some red flag statements from Christian after the game. The first one was “Older guys did not lead the way today, younger players did.” He praised Rishwain for “shooting the ball well” but also said we knew he was a good shooter. He was not pleased with the turnovers because they were caused without pressure. These are things that need to be fixed quickly as the Eagles will face a team that is built the same way as Depaul in St.Louis on Wednesday in the final game of the Gotham Classic.