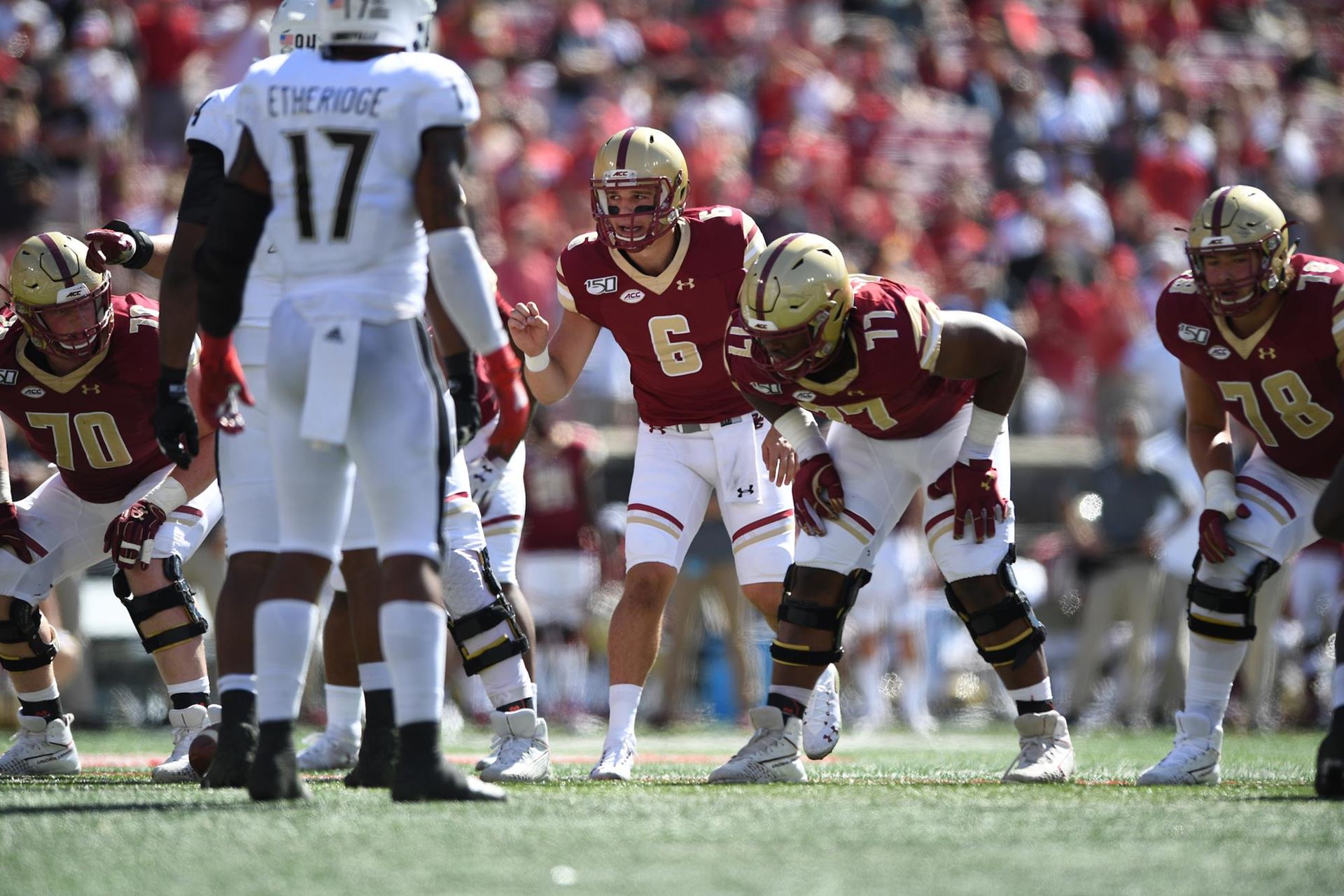 LOUISVILLE, Ky. — The Boston College Eagles lost to Louisville 41-39 on a 41-yard field goal by Blanton Creque in the final minute after the Eagles took the lead on a 45-yard field goal by Aaron Boumerhi with 3:32 to play in the game. The loss dropped BC to 3-3 overall and 1-2 in the ACC, while the Cardinals improved to 3-2 and 1-1.Boston College drove 79 yards on 10 plays on its opening drive but came up short in the red zone.  On a 3rd-and-1 carry from the two-yard line, Dillon was stripped of the ball by UofL’s Monty Montgomery.  Louisville would drive the length of the field on the ensuing possession, rushing two yards for the score, making it 7-0 with 8:33 left in the quarter.The Eagles would respond quickly, going 89 yards in four plays for the score.  Brown and tight end Hunter Long connected on a 72-yard TD strike, knotting it at 7-7.The Cardinals made it 14-7 on their next chance, as QB Micale Cunningham completed a 59-yard pass to Seth Dawkins to cap a four-play, 75-yard drive.The Eagles would tie it at 14-14 on their first drive of the second quarter, but lost quarterback Anthony Brown after a 14-yard keeper.  Dennis Grosel would take over and connect with Korab Idrizi from 10-yards out for his first career TD pass.UofL’s Javian Hawkins carried the bulk of the load on the next drive, including a three-yard TD run that put the Cards back up 21-14.  After three straight punts – two for BC and one for Louisville – the Cardinals struck again, covering 80 yards in three plays to take a two-score lead at 28-14.Grosel went 5-for-7 on the next BC drive, capped by a 13-yard strike to Kobay White for the touchdown.  After a two-point conversion from Grosel to Long, the Eagles got back within six – 28-22 – with less than 30 seconds in the half.  Louisville missed a 44-yard field goal attempt as time expired, and the two teams entered the break with a combined 50 points and 766 total yards gainedAfter forcing Louisville into a three-and-out to start the second half, BC engineered another scoring drive to regain the lead.  Dillon and David Bailey combined to carry the ball five times for 24 yards to get into Cardinals territory. The Eagles converted on 4th-and-1, setting up another BC touchdown between Grosel and Idrizi – this time a 19-yard reception – making it 29-28 with 9:57 left in the third.The Cardinals would respond on their next possession, kicking a 34-yard field goal to take a 31-29 lead.  BC would go three-and-out on its next drive, as Grant Carlson pinned the Cardinals on their own two-yard line on the punt.  UofL would respond with a 98-yard touchdown drive, chewing up close to seven minutes on the clock, taking a 38-29 lead with 14:00 to play.BC turned the ball over on its next drive, as a deep pass from Grosel was intercepted on the Louisville 24-yard line.  The Eagles’ defense limited the damage, forcing a Cardinals three-and-out, giving BC another shot to cut into the deficit.Two big running plays – a 31-yard plow by Dillon and a 37-yard end-around by Travis Levy – capped a three-play, 70-yard drive, making it 38-36 with 10:48 to go.After another stalled Louisville drive, BC took over at their own 20 with 7:29 to play.  Dillon’s 23 yards on the ground helped move the ball upfield to start the drive for BC.  On 3rd-and-14, Grosel rushed for 13 yards and change up the middle, setting up 4th-and-inches.  He found Kobay White on the sideline with an eight-yard pass, keeping the drive alive.  Aaron Boumerhi put BC back on top thanks to a 45-yarder, making it 39-38.The Cards marched down the field on their next drive, setting up a 41-yard FG by Blanton Creque, regaining a 41-39 lead with 1:02 left.  BC’s final drive came up short, turning the ball over on downs.HOW IT HAPPENED