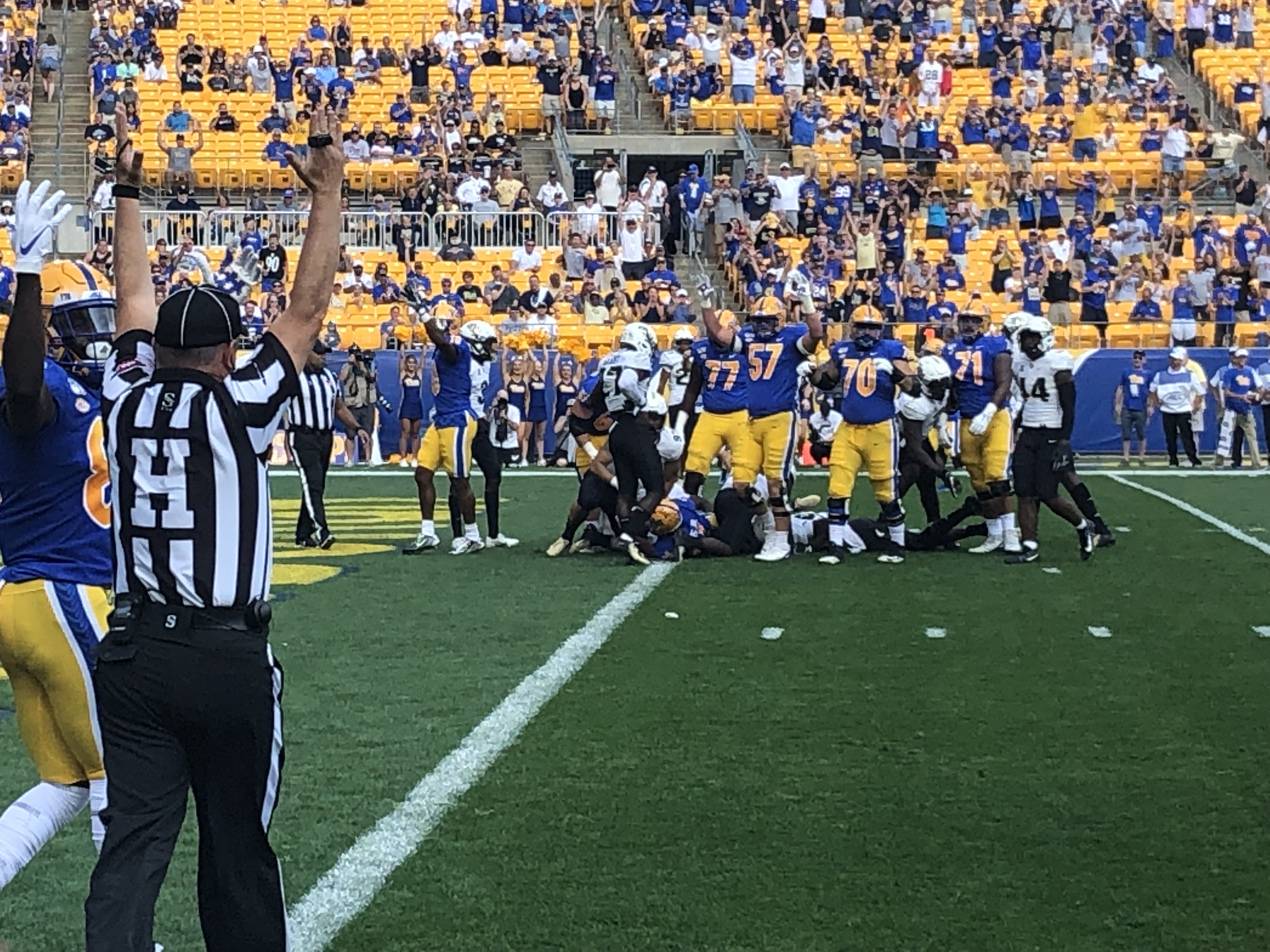 Welcome to the most comprehensive Pitt Panthers Game Day Preview on the internet! This is your one-stop shop for everything you need to know about Pitt and their upcoming opponent! Mike Drakulich of Pittsburgh SportsNation brings you inside the huddle for both teams, providing all fans with a Game Story, Pitt’s Path to Success, Score Prediction, Game Information, a detailed breakdown of each team, Individual Stats, and Team Stats. Heck, you’ll even know the weather at kickoff! The only thing you’re missing is a game uniform!

The Pitt Panther defense has come out attacking all season long. They have gotten to the quarterback 24 times in 2019, and Pitt head coach Pat Narduzzi would like nothing better than to see that trend continue vs the Duke Blue Devils, who with the explosive Quentin Harris under center, have given up just one sack this season.

“So, they’re getting the ball out quick, out of the quarterback’s hands, and they’re not taking negative plays,” Narduzzi said.

Narduzzi has preached since the Spring Game, that stats are just stats, and you have to hit the reset button every week.

“You’re only as good as your last week,” he said. “Right now, when I look at that tape, I get sick and I think we’re a crappy defense, so we’ll find out what we get this weekend, and we’ll evaluate them week by week, and then at the end of the year we’ll find out who we’ve got.”

Pitt would like to add to their takeaway totals, of which they only have two in five games.

The defensive coaches have been working the team hard in practice this week, even implementing a little punishment for missed opportunities.

“If it touches your hand, you might as well go do 10 push-ups right now,” safeties coach Cory Sanders said of any opposing passes that even grazes a defender’s hand. “We harp on it daily. We harp on it in the film room.”

The players are taught to be aggressive through the end of the play, and take nothing for granted.

“Go get that ball,” Sanders said he tells his players. “We call that loose change. If the ball’s on the ground, it’s ours.

“We make that a strong point of emphasis.”

And like in Full Metal Jacket, when one gets punished, all get punished.

“If you don’t get interceptions, you do pushups and they do that as a group,” Sanders said.

With pressure, and continued instruction, the turnovers should increase, sooner than later.

Despite playing the likes of Virginia, Penn State, and UCF, Pitt’s defense is ranked 38th in points against, allowing just 21 points per game. They are 48th against the pass and 17th vs the run.

The secondary has been excellent, blanketing most opposing receivers, which helps the defense collect those 24 take-downs.

“Their first and second reads weren’t there,” Sanders said, “and by that time, you better block our D-linemen or they’re going to be on you. Those guys up front, they are playing with great fundamentals, technique and getting after those O-linemen and quarterbacks.

“I think (the defensive backs) have done a good job downfield just continuing to get better with our eyes and technique. I thought we did pretty good last week, when the quarterback broke the pocket, of just locking on downfield, making sure we’re staying with our wide receivers.”

The Panthers are hoping they will enter Saturday night playing with a full deck, as last week vs Delaware, QB Kenny Pickett missed the game with a shoulder injury, as did A.J. Davis, Vincent Davis, Chris Pine, Jason Pinnock, and Elias Reynolds. That’s in addition to Rashad Weaver, Keyshon Camp and Tre Tipton all being lost for the year.

Todd Sibley made the most of his opportunity and rushed for 106 yards.

Still, Pitt would like to have all their weapons available in a pivotal match-up.

One weapon that will definitely be playing is defensive lineman Jaylen Twyman, who was named Outland Trophy National Defensive Player of the Month for September. Twyman was selected by the Football Writers Association of America (FWAA).

Kenny Pickett will be under center when the Panthers take on the Duke Blue Devils. That should jump-start the offense again and turn those yards they gained last week into points on the scoreboard. Despite only scoring 17 points last week vs Delaware, Pitt out-gained the Blue Hens 443-170.

“Kenny is back, ready to go,” said Narduzzi, who rarely ever comments on injured players. “I’ll talk about guys I know for sure will play. And Kenny will play.

That is great news for a team that may have to put up some points in this one, as Duke averages 33.5 points per game… then again the Blue Devils haven’t faced a defense quite like Pitt possesses either.

Stopping QB Quentin Harris is priority #1, and if the defense plays up to it’s standards, then Harris will be in for a bit of a shock, as he has rarely been touched all year, as evident by the Devils giving up just one sack all year with Harris in the game.

Harris doesn’t throw deep often, averaging just ten yards a pass, so the defense will have to be ready for quick passes to receivers and backs in motion. Like against UCF, Pitt’s defenders need to swarm the ball carrier and gang tackle.

Pitt had a little bit of a hangover last week after it’s huge win vs #15 UCF, and when five other players who play key roles sat out, the Panthers didn’t play quite up to par.

This week is different. It’s a Coastal Division game played in Prime Time, and Pitt will be amped to prove their doubters wrong yet again…

One of the best returners in the game. Looking to take his receiving game to the next level in 2019.

A look at the Duke Blue Devils!

Harris can do it all, from quick passing to taking off and running when needed. Has been sacked only once in 2019. Likes short and accurate passes.

Jackson is the top option for Duke at RB.

Duke’s #1 wide receiver, will test the secondary with his agility to make defenders to miss in open space.

Gray leads the team with 22 receptions. He is Harris’ favorite target and safety blanket.

Solid defense that has played well all season. Giving up just over 20 points and 339.8 total yards per contest.