Metzdorf, who was named an All-ACC First Team selection last week, closed his collegiate career with a complete game, three-hitter to beat top-seeded and No. 7 Louisville to win Pool A of the ACC Championship and send the Eagles to their first-ever conference semifinals. As the Friday night ace of the BC staff, Metzdorf compiled an 8-2 record, 2.30 earned run average, .204 batting average against and 72 strikeouts in 82.1 innings. He went 6-2 in league play; guiding the Eagles to wins over Wake Forest, No. 19 Florida State, No. 17 Georgia Tech, No. 25 Duke, Virginia Tech and a postseason-clinching win against Notre Dame.

Metzdorf finished his career with 13 wins, 2401. Innings pitched and 191 strikeouts. He ranks fourth all-time in innings and ninth all-time in strikeouts in the BC record book. His eight wins as a senior are tied for the sixth most in a single season and 2.30 ERA is sixth in a season at BC.

Morissette hit .441 (26-for-59) in the second half of ACC play to hit .320 for the season. An All-ACC Second Team and ACC All-Freshman team pick, he led the Eagles with 20 doubles and 41 RBI. His 20 doubles are tied for seventh most in a single season at BC. Morissette, like Metzdorf, capped his season by being named to the ACC All-Tournament Team. After hitting just two home runs in the regular season, he burst on to the playoff scene with two home runs in BC’s championship-opening win over Clemson.

Metzdorf and Morissette are the 10th and 11th All-Americans in Boston College baseball history. The most recent All-American was Justin Dunn; a 2016 Third Team selection by Baseball America. Four of BC’s 11 All-Americans have been in the last five seasons, including Dunn and Chris Shaw (2015). 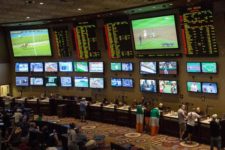 Previous post The Current State of Sports Betting in the U.S.
Next post Stony Brook heading to the NCAA Baton Rouge Regionals