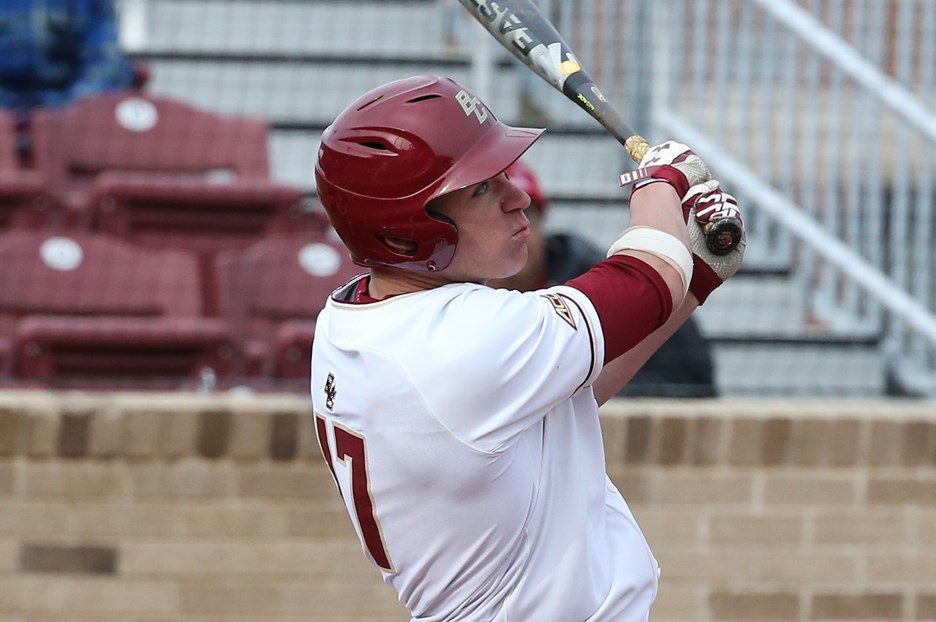 Midweek Pitching Match-Ups:
Tuesday, 3 p.m. vs. UMass: RHP-Travis Lane (0-0, 4.40) vs. RHP-Jack Steele (1-1, 5.25)
Wednesday, 4 p.m. vs. Hartford: TBA vs. RHP-James Judenis (0-2, 10.50)
CHESTNUT HILL, Mass. — The Beanpot comes to Boston College as the Eagles host the semifinal round on Tuesday, April 2 from the Harrington Athletics Village. BC and UMass get the action underway at 3 p.m. followed by Harvard vs. Northeastern. The Eagles host Hartford on Wednesday at 4 p.m. in their second of five home games this week at the front-end of a 10-game homestand.
About the Eagles…
Boston College is 14-13 overall following its first series win in a decade at No. 19 Florida State. The Eagles are 5-7 in ACC play and have picked up top-25 wins over No. 8 Louisville (3/10) and No. 20 Clemson (3/24) in addition to the two wins at the Seminoles. Freshman outfielder Sal Frelickremains BC’s top hitter; leading the team in batting average (.358), slugging percentage (.547), walks (12), on-base percentage (.431) and stolen bases (14). Senior third baseman Jake Alu is hitting .349 with a team-high 23 runs scored to go with eight doubles and three home runs. Junior shortstop Brian Dempsey saw his average rise to .318 with an eight-hit weekend at FSU. He drove in five runs to push his total to a team-high 24 RBI while adding his seventh stolen base of the season. On the mound against Massachusetts, freshman right-hander Travis Lane gets the ball in his first career start. He owns a 4.40 earned run average with no record and 10 strikeouts in 14.1 innings across 10 relief appearances.
Baseball Beanpot…
Tuesday marks the beginning of the 30th Beanpot of baseball. The Eagles are 38-17-1 all-time in the annual tournament, including a 7-5 record against the Minutemen. BC has claimed 13 Beanpot Championship; most recently in 2017, which was the Eagles’ third in a row. Last season, Boston College fell to Harvard in the semis, 7-4, in 11 innings. The Eagles bounced back to take the consolation game from UMass, 9-2. This year’s championship returns to Fenway Park on April 17.
Scouting the Minutemen…
UMass is 5-15 after salvaging its series at Dayton with a win on Sunday for its first Atlantic-10 win of the season. Right fielder Nolan Kessinger, who drove in four runs on Sunday, is hitting a team-high .321, while first baseman Anthony Videtto is second on the team at .310. Right-hander Jack Steele gets the ball for his first career start. He is 1-1 with a 5.25 ERA and 10 strikeouts in 12 innings.
Last Time vs. Massachusetts…
Boston College hosted UMass at the Harrington Athletics Village for the first time on April 10, 2018. The Eagles led 4-0 after four and opened up what was a two-run lead heading to the sixth with five runs in the top half as BC played as the road team on its home field. RHP Jack Nelson got the win with five innings of two-run ball with three strikeouts. Fellow righty John Witkowski went the rest of the way with four-scoreless and five strikeouts to earn the save. Catcher Jake Goodreau drove in four runs and went 2-for-5.
Scouting the Hawks…
Hartford entered the week at 8-13 overall and coming off a series win over UMass Lowell before taking on Sacred Heart on Tuesday. First baseman Chris Sullivan is the lone Hawk hitting above .300 with an even .300 average and team-high 20 RBI in 21 games. Left fielder Ashton Bardzell is hitting .270 with a team-leading .527 slugging percentage on seven doubles, three triples, and two home runs. RHP James Judenis will make his fourth start of the season. He is 0-2 with a 10.50 ERA in 12 innings.
Last Time vs. Hartford…
BC took the first of two games in the 2015 midweek series, 4-1, behind four-shutout inning from Mike King and five innings of one-run ball fromJohn Gorman, who got the win. Hartford bounced back to win the following day; erasing a 2-1 BC lead with four runs in the top of the eighth for a 5-2 win at Shea Field. Jesse Adams started for the Eagles and surrendered just one run in five innings.
Year-to-Year Comparison…
Boston College is six games improved through 27 games than its 9-18 record to start 2018. The Eagles’ scoring is up 0.9 run per game by comparison from 5.2 to 6.1. Home runs are up from 0.29 (overall in 2018) to 0.63 this season. Jack Cunningham hit his team-leading fourth home run at Wake Forest (3/15). Cunningham’s fourth of the year was the 14th of the season by BC. The Eagles’ 14th home run of 2018 came in game 41.
Speeding Eagles…
The Eagles lead the ACC with 60 stolen bases, which ranks 10th in the country. Sal Frelick is third in the ACC with 14 and Chris Galland ranks fourth with 12. As a team, Boston College swiped 92 bags in 2018. The Eagles ranked second in the ACC behind Louisville and 21st in the nation. BC averaged 1.88 per game; good enough for second in the league and 12th in the NCAA. Three Eagles tallied 19 stolen bases or more as Galland led the way with 28. He ranked 20th in the nation and 2nd in the ACC in overall steals and 12th in the country and first in the league with 0.58 per game.
Freshman Impact…
The five BC freshman hitters have combined to hit .318 (99-for-311) with 53 runs scored and 43 driven in. Five freshman pitchers have accounted for 82.1 (35.3%) of BC’s 233.1 innings pitched. RHP Mason Pelio (4-1, 1.73) tossed seven innings of one-run ball at EKU (3/2) to become the first BC freshman to pitch seven or more and allow one run or less since Jacob Stevens vs. Louisville (4/22/16).
Up Next…
The Eagles’ homestand continues against No. 3 North Carolina State. BC takes the field against the Wolfpack for game one Friday, April 5 at 4 p.m.
-BC-
Facebook
Twitter
Pinterest
LinkedIn