Over four and half hours of baseball was played at LeLacheur Park on Saturday afternoon. When it was over, the Hartford Hawks (8-13,4-2 in AE) and the UMass Lowell River Hawks (6-19, 3-3 in AE) swapped games. The River Hawks took game one 3-2 and Hartford came back to win the nightcap 7-5. With the series win, the Hawks now have sole procession of second place in the league with the River Hawks right behind them in the third position.

For the day, Hartford could muster only eight hits in the two games. They did receive 17 free passes from River Hawks pitchers. A point that head coach Ken Harring of UMass Lowell said: “needs to be fixed”. In game two alone,  the walks led to four of the seven runs the Hawks put on the board to help them win game two. Even with that said, the River Hawks did battle. And as was the case on Friday night, gave themselves a chance to win the game late.

Connor Metelski (1-4) got the ball for game one for UMass Lowell. He too had issues throwing strikes. After getting the first two outs, he would walk the next three hitters in a row. Hawks shortstop, Jackson Olsen, stepped to the plate with the bases loaded and two down. He delivered a two-run double just fair inside the left field line and the Hawks were up 2-0 before the River Hawks came up to bat.

Billy DeVito (1-1) was Hartford’s starter and thru the first three frames looked like he was on. He only gave up a single to left off the bat of River Hawks catcher Kyle Maurice. The fourth inning would be DeVito’s (7 IP, 4 H, 3 ER, 1 BB, 10 K’s) undoing. With one out, DeVito would hit Cam Clino, give up a single to Steve Passatempo, and a walk to Vinnie Martin. Oscar Marchena, the River Hawks hottest hitter, came up with the bases juiced and he ripped a two-run single to right. It scored both Clino and Passatempo to tie the game at two. A fielder’s choice ground out by Robert Gallagher plated Martin and gave Lowell the 3-2 lead.

Metelski (5 IP, 2 H, 2 ER, 5 BB, 2 K’s) settled down and found a way to get through five innings. He handed the ball to freshman Joshua Becker (save #2) in the sixth. Becker did get into trouble in the inning with a throwing error by shortstop Marchena that was followed by a single to right by Olsen. Becker (4 IP, 2 H, 0 R, 1 BB, 5 strikeouts) who his coach calls “a bulldog”, ended any hopes of a Hawks comeback by striking out the next three batters to get out of that mess.

In the Hartford ninth, pinch hitter Derek Kellogg gave his team some hope with a leadoff single to left. Next man, Bryce Walker, was asked to bunt by his coach Justin Blood. After two failed tries to sacrifice, Walker was allowed to swing away and hit into the only double play of the day, 6-4-3. Becker got leadoff hitter Zachary Ardito to hit a ground out to third and the River Hawks took game one 3-2.

Game two was all about throwing strikes or lack thereof. Sal Fusco (4.2 IP, 3 H, 5 ER, 5 BB, 4 SO, 3 WP) got the start for Lowell. His coach said, “Fusco had his best stuff of the season”. While that might have been true, throwing the baseball over the plate was a problem. Hartford again scored first on a two-out double by Olsen to right (three-hit day for him). That was followed by two wild pitches that allowed him to score to make it 1-0 Hawks. Hartford’s second run in the third came after Ardito reached on a fielder’s choice. He stole second and moved to third on the third wild pitch credited to Fusco. He scored on a base hit by left-fielder Chris Sullivan (4 hits, three RBI on the day) 2-0 Hartford.

Sebastian DiMauro (5.2 IP, 4 H, 3 R, 2 ER, 2 BB, 5 SO) was the Hawks game two pitcher. He gave up an unearned run in the fourth to cut the deficit in half at 2-1 Hartford. Everything fell apart for the River Hawks in the fifth. The Hawks would plate five runs in that half-inning against three Lowell hurlers. Four of them crossed home plate via the base on balls. There was one hit and an RBI single by Sullivan. But the free passes would be the undoing of UMass Lowell in game two.

The River Hawks did make it interesting in the seven-inning affair. They scored twice in the sixth on a sac fly by Martin, and a single to center by Marchena. One of those runs was charged to DiVito and the other to reliever Drew Farkas. After six it was a 7-3 Hartford lead. In the seventh, Lowell was back at it. An infield single from Mark Tumosa was followed by an RBI base hit from Trip McCaffery to center. It would score Tumosa all the way from first. McCaffery came on late to replace an injured Michael Young. Clino then scored McCaffery with his second hit of the game, a single to center. Lowell was now within two at 7-5.

Blood then went to his bullpen to bring on his closer, Will Nowak. The first man he faced, Martin, singled to put runners at the corners. With the game on the line and two men out, Nowak faced Marchena. Nowak would win the battle by getting Marchena to strike out swinging to end the ball game.

Hartford won game two 7-5 and took the series. DiMauro got the win (2-0) while Fusco took the loss (1-2). Lowell returns to action with a pair of mid-week games. Tuesday at home vs URI, Wednesday on the road at UConn. 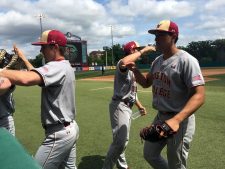 Next post Freshmen Lead Eagles to Series Win at No. 19 FSU