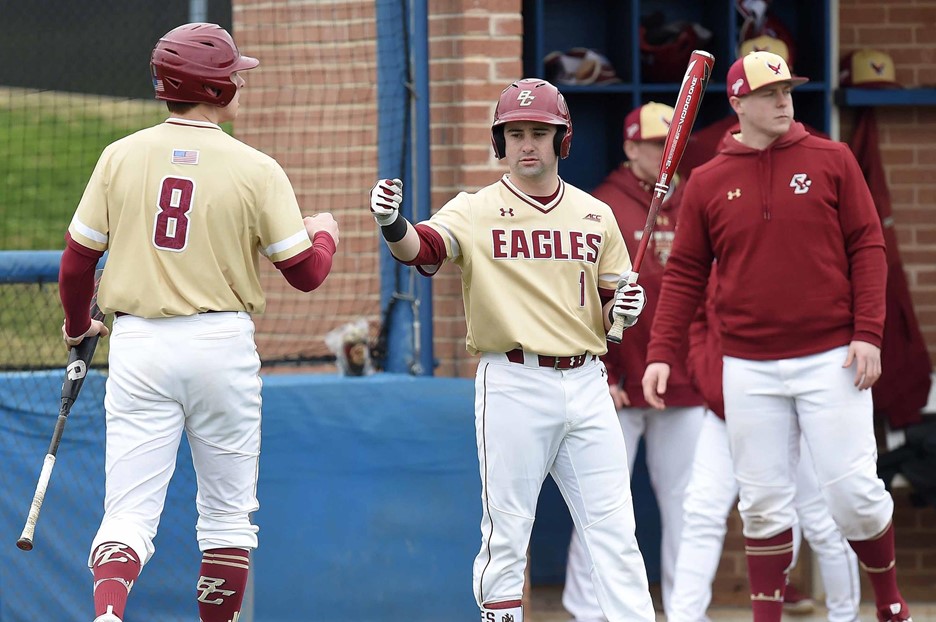 Boston College’s final tune-up before ACC play takes the Eagles to Lexington, Ky. to take on Kentucky of the SEC at brand-new Kentucky Proud Park. The game is slated for a 4 p.m. first pitch and will air on SEC Network-Plus.

Boston College is 6-4 on the season after a 2-2 weekend with two wins over Eastern Kentucky and two losses to Evansville on EKU’s campus. Freshman outfielder Sal Frelick leads BC in batting average (.436), RBI (12), doubles (4), slugging percentage (.667), on-base percentage (.500) and stolen bases (11). Senior third baseman Jake Alu is second with a .359 average. Over the weekend, Alu hit a go-ahead, three-run home run in the Eagles’ Friday win over EKU and a bases-clearing, three-run double to help secure Saturday’s win vs. the Colonels. Freshman second baseman Cody Morissette blasted his team-leading second home run, a grand slam to cap off the Saturday win, and lifted his average to .349. Sophomore left fielder Chris Galland is the fourth BC hitter batting above .300 with a .318 average. He has scored a team-high 12 runs, while adding eight stolen bases. As a team, Boston College ranks fourth in the country with 35 stolen bases and first with 3.5 per game.

Coming off a sweep of Canisius, Kentucky is 8-3 and 5-0 at home. Left fielder Ryan Shinn leads the Wildcats with a .361 average and 14 runs scored to go with six doubles and two home runs. First baseman Dalton Reed has hit three doubles and three home runs, while batting .311. UK has totaled 11 home runs in 11 games as a team and is slugging a collective .434. Despite holding opponents to a .237 batting average, the Kentucky pitching staff owns a 5.16 earned run average. LHP Mason Hazelwood (0-1, 3.00) and RHP Grant Macciocchi (1-0, 2.45) have each made one start in the midweek.

Through week three, the Eagles lead the ACC with 35 stolen bases, which ranks fourth in the country; five behind national leader UAB. Individually, Sal Frelick is third in the country with 11 and Chris Galland ranks 18th with eight. As a team, Boston College swiped 92 bags in 2018. The Eagles ranked second in the ACC behind Louisville and 21st in the nation. BC averaged 1.88 per game; good enough for second in the league and 12th in the NCAA. Three Eagles tallied 19 stolen bases or more as Galland led the way with 28. He ranked 20th in the nation and 2nd in the ACC in overall steals and 12th in the country and first in the league with 0.58 per game. Dante Baldelli and Palomaki each stole 19 bags in 21 attempts; tying for eighth in the ACC. Collectively, BC stole bases at a 79.3% success rate. Jack Cunningham swiped eight, while Brian Dempsey added seven.

The Eagles finish off their eight-game, 11-day swing through Kentucky with their ACC-opening series at Louisville. BC visits the Cardinals for three beginning on Friday, March 8.