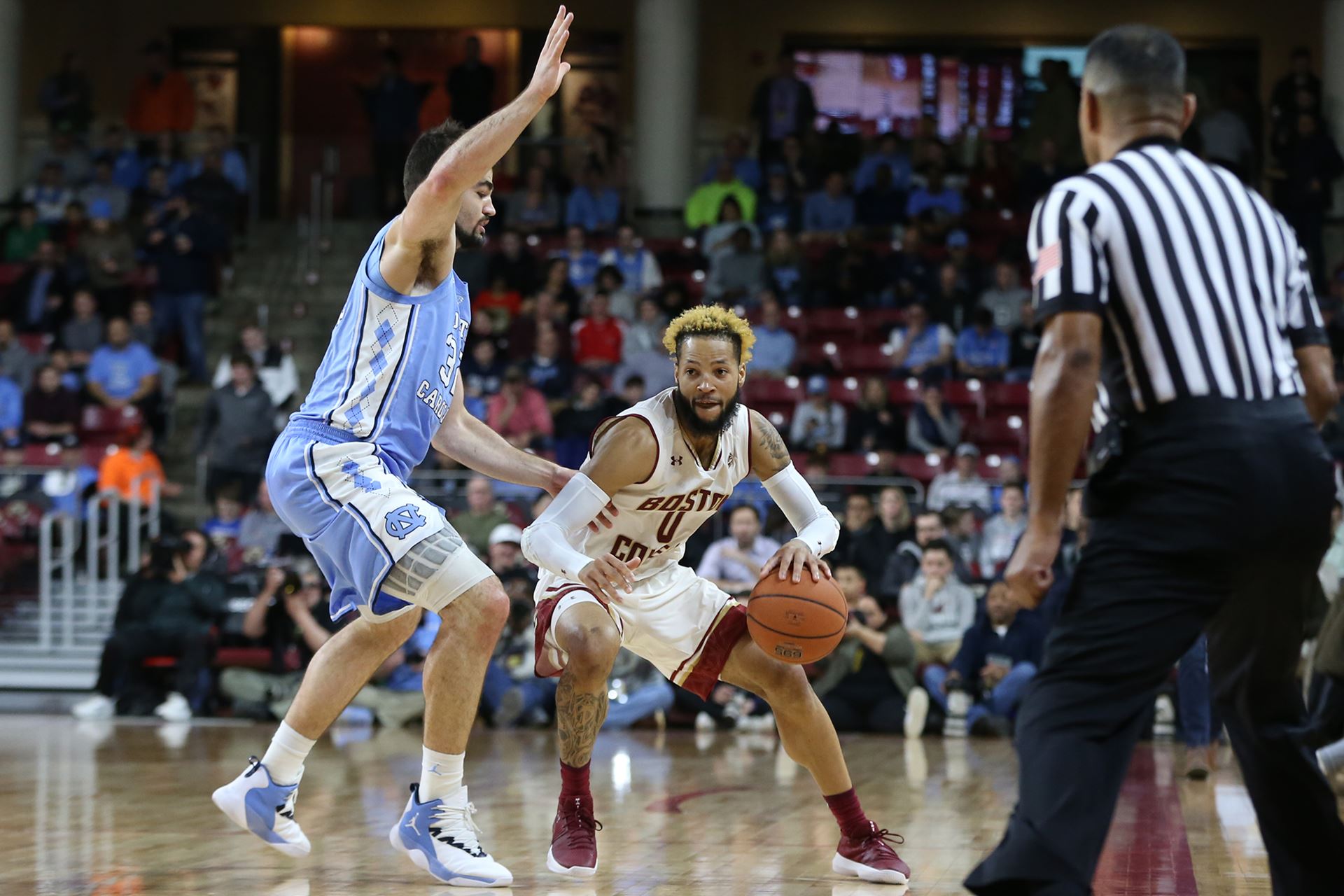 Share
Tweet
Share
Share
Email
Comments
Twenty-plus points from Ky Bowman and Nik Popovic weren’t enough for Boston College, as shooting struggles in the first half plagued the Eagles in a 79-66 loss to North Carolina.
This season marks the 25th anniversary of BC’s second-round upset of No. 1 overall seed UNC in the 1994 NCAA Tournament. BC honored tournament hero Bill Curley a few weeks ago and hoped to rekindle the magic this cold, snowy Tuesday night in Chestnut Hill.
It looked like Boston College was going to hang around early on, as teams traded buckets and Bowman knocked down two early 3-pointers.
The teams were tied at 16 after a little over five minutes of game time. Over the final three-quarters of the first frame, UNC outscored BC 32-9 and broke the game wide open. BC finished the first half down 48-23, shooting just 24 percent from the field.
The Eagles had a few good runs in the second half but were already in too deep of a hole to ever make it a game. The 13-point margin of defeat was the closest BC was able to come, after the team ended the game on a 10-0 run.
BC was again without its second-leading scorer Wynston Tabbs, but fellow freshman Jairus Hamilton joined Tabbs in street clothes after tweaking his ankle Sunday night against Georgia Tech.
According to coach Jim Christian, Tabbs is moving closer to practicing, but the Eagles are waiting until he is 100 percent to bring the dynamic scorer back into game action.
Bowman led all scorers with 23 points, 21 of which came from 7-of-18 3-point shooting.
“You can’t stop Ky,” coach Roy Williams said. “Our goal was just to cut down on his percentage.”
The Tar Heels couldn’t cut down on his percentage in the matchup, but they made sure to limit the damage of BC’s other scoring options.
Popovic also finished with over 20, but no other BC player finished with double digits.
Notably, Jordan Chatman had his second-worst shooting night of the season, finishing 3-of-18 from the field.
Over half of BC’s points (36-of-66) came from beyond the arc. All of the 3-pointers came from Bowman, Chatman, and Chris Herren Jr.
An even scoring attack propelled the Tar Heels, who finished with five in double figures. Cam Johnson led the team with 22, but Luke Maye, Coby White, Kenny Williams, and Nassir Little had 10 or more points.
Second-chance points and points in the paint favored the Tar Heels. UNC grabbed 20 offensive boards and outscored BC 44-18 in the paint.
With the loss, BC dips under .500 (14-15) for the first time all season. UNC meanwhile improves to 25-5 and stays alive for a 1-seed in the ACC tournament.
Both teams have one game left before the start of the ACC tournament. UNC hosts Duke in a game that could feature the return of Zion Williamson, who has been out of action since the Tar Heels and Blue Devils last squared off. This gameplay a big role in determining seeding for the conference tournament.
BC closes out the regular season Saturday when the Eagles host NC State. This will be the second of two matchups between the two teams this season, with the other coming February 20th in Raleigh. The Wolfpack won that one 89-80 in overtime after a furious comeback from the Eagles in the second half.