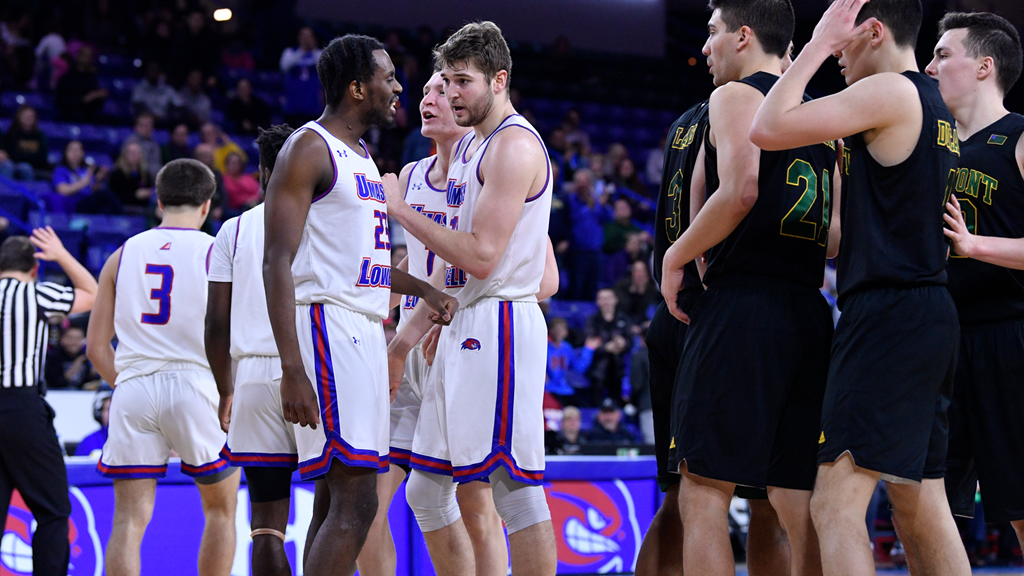 LOWELL, Mass. – The UMass Lowell men’s basketball team, who is 15-15 overall and 7-8 in America East play, will close out the regular season at top-ranked Vermont on Tuesday evening.

A WIN WOULD
A win would split the season series between the River Hawks and Catamounts. A victory would also tie the program record for America East wins (8), originally set during its inaugural season in the league. It would give the team its most wins away from home since 2011-12, as well.

LAST TIME OUT
In a game that featured 17 lead changes, UMass Lowell was able to take the lead for good inside of the final 10 minutes to earn a 70-61 victory at Maine on Feb. 27. Down by two at 51-49, freshman Joey Glynn dug in and tallied buckets on the River Hawks’ next four possessions to spark a 16-4 run that gave the squad its only double-digit margin of the night, 65-55, with less than five minutes left to play. The Black Bears were able to cut the difference to just five in the final minutes, but a layup and a pair of timely defensive rebounds by senior Ryan Jones secured the decision. Redshirt-junior Christian Lutete led the way offensively with 21 points, including a 7-for-7 effort at the line. Sophomore Obadiah Noel added 14 points, while senior Shawn Jones and Glynn chipped in with 12 and 10 points, respectively.

LEADING THE FLOCK
Through 30 games in 2018-19, Christian Lutete is leading the team with 18.6 points and 7.8 rebounds per game. Obadiah Noel, who follows with 14.6 points per game, paces the team with a 72.8 clip from the line and 37 steals. Josh Gantz boasts a team-best 26 blocks and has also dished out a team-high 91 assists.

SCOUTING VERMONT
The Catamounts own a 23-6 overall record and a 13-2 mark in conference action. The team won both of its two most recent outings, defeating Binghamton on the road, 69-63, on Feb. 23 before earning a 56-50 decision against Stony Brook on March 2. Anthony Lamb is pacing the squad with 21.1 points and 8.0 rebounds per game, and 53 blocks. Stef Smith boasts 27 steals, while Robin Duncan totals 77 assists. As a team, Vermont is shooting 45.3 percent from the field, including 34.3 percent on threes, and 75.5 percent from the line.

PLAYOFF PICTURE
The River Hawks have clinched the fifth seed heading into the 2018-19 America East Championship, finishing two spots higher than they did a season ago when the squad made its Division I postseason debut. Following Tuesday’s season finales across the league, UMass Lowell will find out whether it will be squaring off against Hartford or Stony Brook in the quarterfinals on March 9.

SETTING A NEW STANDARD
With the decision at Maine on Feb. 27, the River Hawks tallied their 15th win of the season, expanding on a new Division I program record. UMass Lowell now boasts its most league wins since 2015-16.

ROAD WARRIORS
The River Hawks, who play a DI program-high 18 road games this season, have recorded their most wins away from home during the Division I era (7). The program has accumulated a 100-139 road record since 2003-04.

A LASTING IMPRESSION
Senior Shawn Jones is finishing his career on a high note, averaging 8.7 points in the last seven games. During that stretch he has earned his first two career starts, in addition to turning in career highs for assists (8, at Maine), rebounds (8, vs. Hartford) and points (17, vs. UNH).

HENDERSON HEATS UP
Darius Henderson logged season highs for points (13), three-point field goals (3) and minutes (26) at UMBC on Feb. 16. Henderson is averaging 7.2 points in the last five games, compared to 4.9 through the first 23 games.

DOUBLING UP
With 17 points and 11 rebounds, Christian Lutete became the first River Hawk to tally a double-double in their debut at the Division I level. He has added nine more since to rank first in the league and 47th in the nation with 10 double-doubles in 2018-19, and second on the school’s DI career record list. He also put together a 20-game, double-digit scoring streak this season, matching the longest DI streak for the program.

EARLY BIRD
The River Hawks are 9-2 in 2018-19 when getting to work early and taking a lead into halftime.

SHARP SHOOTERS
In the win against Army on Nov. 17, the River Hawks shot over 60 percent (61.2%) from the floor for the first time since Jan. 5, 2017. As a team, UMass Lowell has shot better than 50 percent on field goals 10 times this season and is first in the league with a 47.4 overall field goal percentage. Four of the five starting River Hawks are shooting over 50 percent, led by Christian Lutete, who is ranked first in the America East with a 53.2 percent clip so far this year.

BENCH PRESS-URE
In 30 games this year, the River Hawks have averaged 21 points off the bench. This is up from last season when the squad averaged just 15.3 bench points per game.

HELPING HANDS
The River Hawks set a new Division I program record with 29 assists against Maine Fort Kent on Dec. 7. The squad is currently 29th in the nation with 474 total assists and is first in the America East with 15.8 assists per game. Ryan Jones became just the second player in the program’s Division I history to register 10 assists in a game in the NJIT contest on Dec. 1.

SPREADING THE LOVE
Despite heading into 2018-19 having lost 60.6% of their scoring from a season ago, at least four different River Hawks have reached double figures in 19 of their 30 games this season, including a season-high five, 10+ point scorers in six of those games.