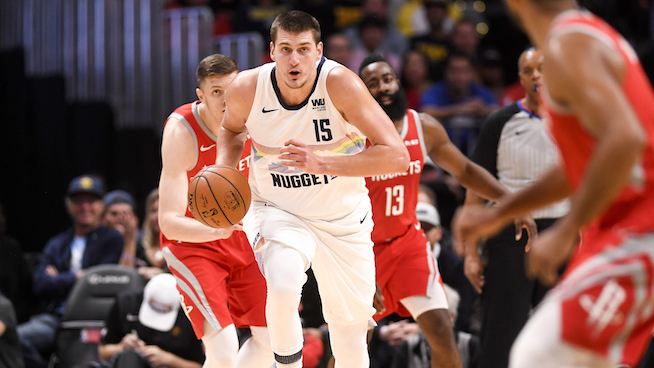 Denver Nuggets’ center Nikola “The Joker” Jokic deserves to be in the NBA MVP conversation. The 7-foot-0 and 250-pound mega-talent from Serbia is leading Denver to new heights in the Mile High City. Jokic recently turned 24-years-old on February 19th, and this young pup has nothing but game.

He has got game for days, folks. Mr. Jokic is a straight baller. To this day, I haven’t seen anyone standing 7’0″ deliver dimes like this absolute stud. He’s simply the best passing big man in the Orange Roundball League, period. I dare you to tell me otherwise. Go ahead, give me a name. You can’t do it.

A first-time All-Star this season, the No. 41-overall pick in the 2014 NBA draft looks to be pushing the Nuggets to the top of the mountain in the Western Conference. Entering Thursday night’s affair at Pepsi Center in Lodo, Denver against the Utah Jazz, the Nuggets lead the West with a 42-18 record. Percentage points above the Golden State Warriors with a dominant, league-best 27-4 mark at home inside “The Can” in Lodo, the Nugs might just be the biggest surprise in The Association during this 2018-19 campaign.

You can thank The Joker for being the trendsetter. Even with a stacked and much healthier roster than earlier in the season as well as the return of Isaiah Thomas into the rotation, the Nuggets aren’t the squad they’ve become without Jokic. This kid’s averaging nearly a triple-double this year. Does 20.7 points, 10.7 rebounds, and 7.7 assists per game do anything for you? I’ll sure as heck take that every night.

Although he plays the center position, Nikola runs the floor like a guard. He can put the orange on the deck, dribble-driving his way to the tin with ease. A seven-footer with the ball handling skills and speed of a little guy. Remarkable.

What about range for days? Jokic has it. Right at the rim or shooting a triple from the land of plenty, this youngster has the whole package in his arsenal. Being willing to squeeze the rock in traffic on the boards with big-time improvements in his game defensively, The Joker is the Nuggets’ MVP.

You certainly can’t look past Giannis “Greek Freak” Antetokounmpo of the Milwaukee Bucks, but Nikola “The Joker” Jokic is clearly a deserving league-MVP candidate. If Denver can lock up the No. 1-seed in the West ahead of the Warriors come playoff time, he very well could come home with the hardware.