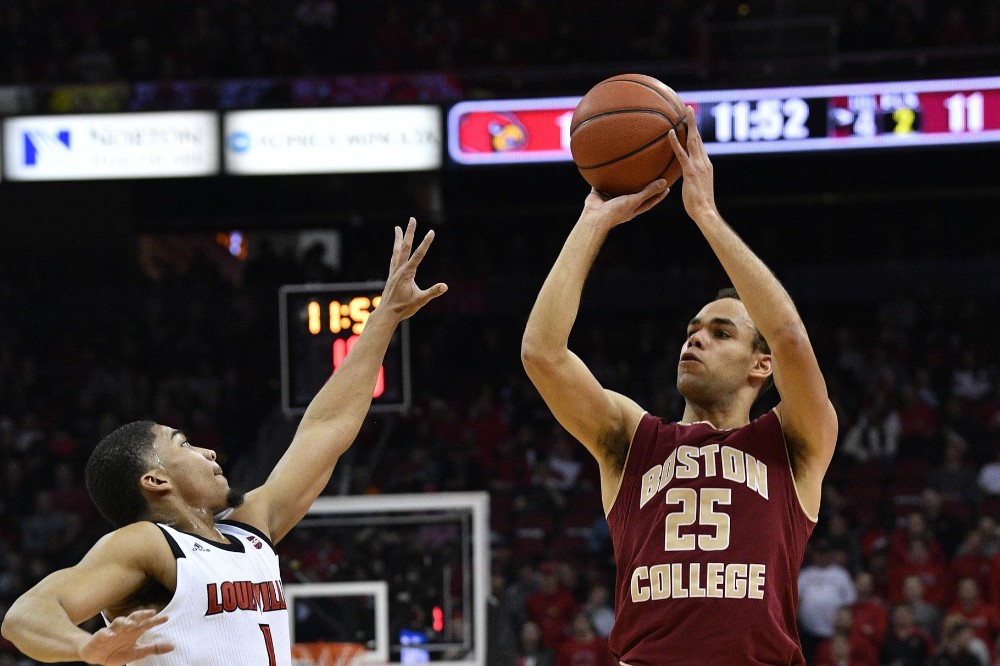 LOUISVILLE, Ky. — Jordan Chatman connected on 6-of-10 from the perimeter, leading Boston College with 21 points in an 80-70 loss at Louisville on Wednesday night.

Trailing by 23 – 71-48 – with 9:10 to play, the Eagles used a 22-4 run late in the second half to get within five.  Chatman scored 10 points during the stretch while the BC defense forced three turnovers.

A Nik Popovic layup with 1:50 left cut it to five – 75-70 – but the Eagles would get no closer.  On their next possession, the Cardinals hit the offensive glass to generate a second-chance 3-pointer that sealed the win for the home squad.

But the Cardinals would score nine unanswered points, beginning a run that closed the half outscoring the Eagles, 27-5.  Louisville led 43-33 at the break.

STAT OF THE GAME:
29 – Ky Bowman has grabbed 29 rebounds over his last two games.

FOR THE ANALYTICS CROWD:
Jordan Chatman led BC with an efficiency mark of 21.  Ky Bowman (18) and Nik Popovic (10) were the other Eagles in double-digits.  Efficiency rating is calculated using the following formula: (PTS + REB + AST + STL + BLK – Missed Shots – TO).

UP NEXT:
Boston College returns home to host Florida State in an ACC matchup on Sunday, Jan. 20.  Tipoff is set for noon ET and the game can be seen live on ESPNU.  Anish Shroff and Cory Alexander have the broadcast call on the game.  The game can also be heard live on the Boston College IMG Sports Network with Josh Maurer and Danya Abrams.