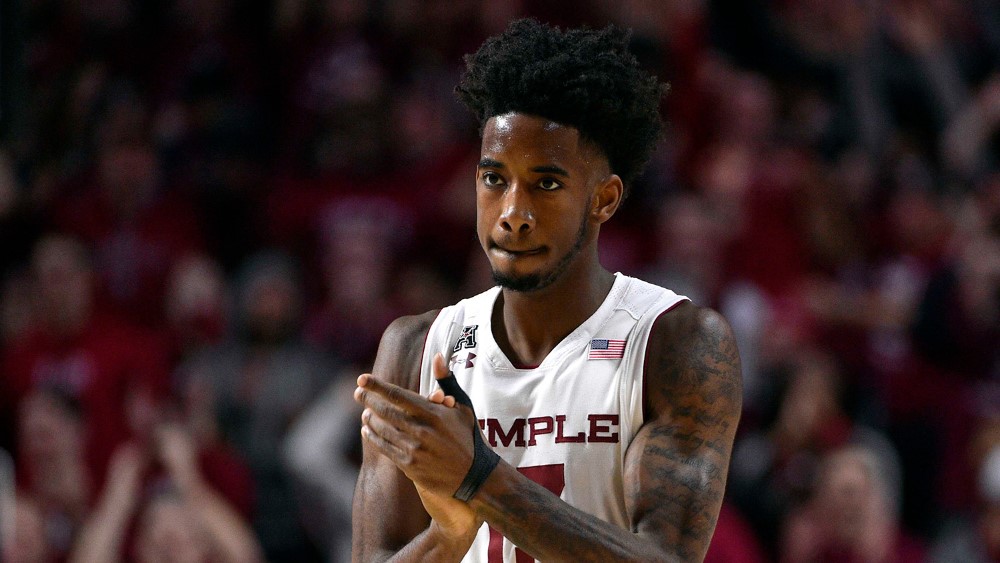 The Temple Owls played against the Davidson Wildcats in Atlantic City, New Jersey on Saturday night for the Air Force Reserve Basketball Hall of Fame Boardwalk Classic. The Owls got the win with the time winding down in overtime, 77-75.

In the first half of the game, the Owls were battling with the Wildcats. The game started with the Owls quickly down seven to start, 9-2. However, the Owls crept back into things and were within one point with about five minutes to play in the first half. The score was 25-24. The remaining five minutes fell out of Temple’s reach as they soon found themselves trailing by eight at the end of the half, 35-27.

The Owls knew that they had to switch something on the offensive side of the ball if they wanted to have a chance to walk away with the win.

The second half was another gritty half of basketball. The Owls had to battle their way back into things and stick with the Wildcats. Quinton Rose, Shizz Alston, Jr., and De’Vondre Perry helped the Owls gain momentum and ultimately the lead with just under 15 to play. All three of these guys ended in double digits. Going forward, the teams traded shots down the stretch which ultimately led to the teams going into overtime due to a J.P. Moorman II three-pointer with 48 seconds left in regulation.

Moorman II was a guy who really stepped up in this one. The sophomore ended with 14 points and certainly helped the team stay in the game. The team also were 12-31 from three, which has been a recent high point for the team, as they have struggled to find their three-point shot as of late.

Once the teams were in overtime, the intensity heightened. Davidson jumped out to a quick seven-point lead with only 2:46 left to play. The Owls got a much-needed three-pointer from Perry which brought them within four. After the Owls got two more threes from Rose and Alston, the Owls found themselves tied with Davidson with only 22 seconds left.

Davidson’s KiShawn Pritchett dribbled down the court fresh off of a timeout. Pritchett tried to make a pass to his teammate which was read perfectly by Rose, which led to a steal and ultimately a game-winning dunk with three seconds left on the clock. The Wildcats weren’t able to do anything with the remaining time and the Owls won 77-75.

The Owls were led in scoring by Alston who had 24, Rose who ended with 18, Moorman who had 14 off of the bench, and Perry who ended with 11. Alston also added 11 assists as he has a double-double on the night.

Davidson’s Luke Frampton had 24, Carter Collins ended with 16 and Pritchett had 12.

With the win, the Owls improve to 9-2 on the season. Davidson falls to 8-2, as that loss was only their second of the year. The Owls have a Big 5 matchup next against Drexel.